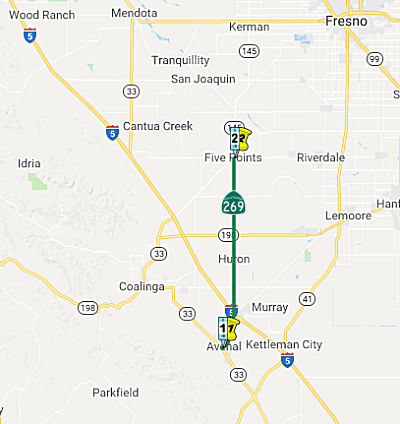 From Route 33 at Avenal to Route 145 near Five Points.

Route 269 is a 30 mile state highway running from Route 33 at Avenal in Kings County north to Route 145 at Five Points in Fresno County. Route 269 traverses the outskirts of the Diablo Range and Kettelman Hills before the descending northward into San Joaquin Valley along the duration of the alignment. There are major junctions with the Avenal Cut-Off Road, I-5 and Route 198 in addition to the termination points described above. Route 269 is a relatively new state road. The highway alignment was adopted off pre-existing roadways in 1972. Although adopted in 1972, it does not appear that the entirety of what is now Route 269 was upgraded to state highway standards until sometime between 1978 and 1979. It appears that the State Highway may have been in part built to service Avenal State Prison which opened in the late 1980s. From Route 33 in Avenal, Route 269 is known as Skyline Blvd north to I-5. A 1935 County Map of Kings County show Skyline Blvd existing but in a much curvier alignment in the Kettelman Hills which is now known as Old Skyline Blvd and occupied largely by oil rigs. From I-5 north to Route 145 in Five Points is known as Lassen Avenue and largely just a direct north/south run through San Joaquin Valley. Five Points apparently was founded some time before World War II as a possible stopping point along the Fresno-Coalinga Road which would eventually become part of Route 145. It appears that Five Points is named after the five pointed junction of Mount Whitney Avenue, Fresno-Coalinga Road, and Lassen Avenue.
(Source: Tom Fearer (Max Rockatansky). on AARoads, April 2017) 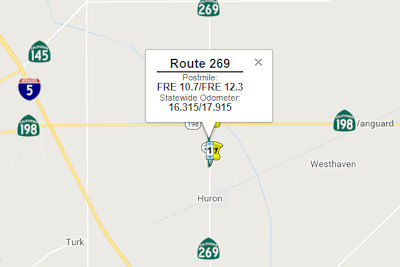 In May 2018, the CTC approved for future consideration of funding the following project for which a Mitigated Negative Declaration (MND) has been completed: Route 269 in Fresno County. Construct roadway improvements including replacing three bridges near the city of Heron. (PPNO 2184) (06-Fre-269, PM 10.4/12.5) This project is located on Route 269, north of Heron in Fresno County. The project proposes to raise the profile grade and construct three bridges. Winter storms have caused flooding and closure of Route 269 an average of 22 days per year since 1978. The proposed project will eliminate traffic detour going in and out of Heron due to flooding. The proposed project is estimated to cost $18.5 million in construction. This project is fully funded and is currently programmed in the 2018 SHOPP for $27.5 million which includes Construction (capital and support) and Right-of-Way support. Additional funding of $1.2 million is anticipated from local Measure funds for Right-ofWay. Construction is estimated to begin in FY 2018-19. The scope, as described for the preferred alternative, is consistent with the project scope programmed by the Commission in the 2016 SHOPP.
(Source: CTC Agenda, May 2018 Agenda Item 2.2c(1))

The portion of Route 269 from Route 198 to the City of Five Points in Fresno County (~ FRE 12.943 to FRE 24.704) is named the "Officer John Palacios Memorial Highway". This segment was named in memory of Officer John Palacios, who faithfully served the residents of the City of Huron in Fresno County as an officer of the Huron Police Department. Officer Palacios died in the line of duty at 21 years of age on June 13, 1976, when he was assisting the California Highway Patrol with a traffic accident on Route 269 in Huron, California, when he was struck and killed by a drunk driver. Named by Senate Concurrent Resolution (SCR) 14, Resolution Chapter 92, on 7/12/2007.
(Image source: Gribblenation; Find a Grave)

The 500-foot long bridge over Arroyo Pasajero Creek on Route 269 (~ FRE 269 10.4/FRE 269 12.5) is named the Heart of the Valley Bridge. It was named in memory of seven residents of Fresno County who lost their lives on I-5 on March 12, 1995 when Route 269 was closed due to roadway collapse and raging flood waters. Route 269 passes through the rural community of Huron, California, and connects to I-5. Between the time when Route 269 came into the state highway system in 1976 and 2020, it had been closed over 551 days due to flooding. Because Route 269 is the only access to the community of Huron from the north, community residents must travel a 28-mile detour for shopping and services, including for medical emergencies, during road closures. Residents of Huron and the surrounding rural communities depend on Route 269 to keep them connected to the rest of the Central Valley by way of Route 198 and I-5. The Route 269 Bridge Project will create a reliable and safe corridor for the local and regional motoring public. The construction of three new bridges and modification of the Arroyo Pasajero Creek channel will prevent future closure of the highway due to flooding. Named by Assembly Concurrent Resolution (ACR) 124, Res. Chapter 40, 09/14/20.
(Image source: Huron Mayor Ray Leon FB Page)