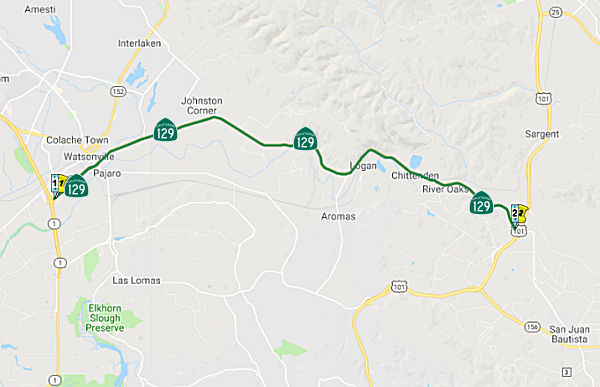 From Route 1 near Watsonville to Route 101 in San Benito County.

As deifned in 1963, this route ran from "Route 1 near Watsonville to Route 101 near the San Benito River bridge, passing near Chittenden."

In December 2021, it was reported that the roundabout at the intersection of Route 129 (Riverside Road) and Lakeview Road opened on Dec. 3 to through traffic. Final roadway striping and a variety of construction details were still to be completed, but the roadway and roundabout was open to motor and pedestrian traffic. The $3 million project was completed by Dreambuilder Construction of Placentia, Calif. The roundabout eliminates a stop sign on Lakeview Road where it ends at Route 129. Caltrans also installed high-visibility pedestrian crosswalks, with flashing lights and signage.
(Source: The Pajaronian, 12/6/2021)

In August 2020, the CTC authorized relinquishment of right of way, consisting of collateral facilities, in the County of Santa Cruz along Route 129 on Carlton Road (05-SCr-129-PM 3.25) under the terms and conditions as stated in the Relinquishment Agreement dated May 26, 2017. The City, by resolution letter signed April 14, 2020, agreed to  waive the 90-day notice requirement and accept title upon relinquishment by the State.
(Source: August 2020 CTC Agenda, Agenda Item 2.3c)

The route is named "Riverside Drive".

The portion of Route 129 from Route 1 at Riverside Drive to Blackburn Street in the City of Watsonville (~ SCR 0.000 to SCR 0.529) is named the "Oscar Rios Highway". It was named in honor of Oscar Rios, born in El Salvador in 1950. In 1960, Rios and his family emigrated to San Francisco, where he became a United States citizen, later moving to Watsonville in 1985. Oscar Rios became the regional organizer for La Alianza, a nonprofit agency that provides advocacy referral and citizenship processing, and was an organizer during the Watsonville cannery strikes that lasted from 1985 to 1987, the longest cannery strikes in United States history, and that were led primarily by women cannery workers. In 1989, Oscar Rios was elected to the Watsonville City Council just after the federal Ninth Circuit Court of Appeals struck down Watsonville’s discriminatory at-large election system and implemented district elections in the landmark federal voting rights case of Gomez v. City of Watsonville. When Oscar Rios became Watsonville’s mayor in 1992, he became the first mayor of any United States city of Salvadorean descent, and quickly earned a reputation as an energetic and accessible leader, and he became a founding member of the Latino Caucus of the League of California Cities. Oscar Rios worked to build a successful partnership with Watsonville’s local school district, resulting in the creation of more parks and playgrounds, and also worked with Watsonville’s business community to create hundreds of new jobs. Oscar Rios led voter registration drives through the Southwest Voter Registration Education Project and worked on numerous campaigns to get other Latinos elected to political office, and continues to organize for Latino empowerment locally and statewide. Oscar Rios served 17 years on the Watsonville City Council and is the longest serving Latino city councilmember in the history of the County of Santa Cruz, having retired from the council on December 11, 2012. As of 2014, Oscar Rios continues to be employed as a Teamster Union Business Agent for Local 890 in Salinas. Named by Assembly Concurrent Resolution 67, Resolution Chapter 141, on September 2, 2014.
(Image source: Santa Cruz Sentinel, 8/15/2016)

Postscript: Oscar Rios went on to be reelected to the Watsonville City Council in 2016. A four-time mayor, Rios was first elected to the council in 1989, benefiting from court-ordered district elections aimed at giving then politically underrepresented Latinos a shot at electoral power. When he became Watsonville’s mayor in 1992, Rios became the first mayor of any U.S. city of Salvadorean descent. He served on the City Council until 2000, stepped down, returned four years later and then stepped down again in 2008 to make room for a community activist and lawyer named Luis Alejo — now Assemblyman Alejo. In 2010, Rios was appointed to serve a final two years before stepping down in 2012 to focus on his work as a union representative for the Local 890 Teamsters in Salinas. When Rio retired from the Teamsters in 2016, people began asking him to run for City Council again. He was reelected by three votes in 2016, when he became mayor for a fifth term. But then sexual assault allegations surfaced. One accuser, Liz Bean, recalled one night in a hot tub in 1988 at the home of Oscar Rios, then a union organizer in Watsonville. When Rios’ girlfriend stepped into the house, Rios began scooting close to Bean. As the two of them made small talk, she says, Rios reached over to her and put his fingers into her vagina. Just hours after allegations of sexual impropriety came to light, Rios announced in a statement that he was resigning from his seat on the Watsonville City Council. As such, Rios joins the small group of individuals who have had highways named after them, only to bring disgrace upon that name afterward. See Richard T. Silberman Bridge on I-15.
(Source: Santa Cruz Sentinel, 8/15/2016; Pajaronian 2/26/2018; Good Times SC, 2/26/2018) 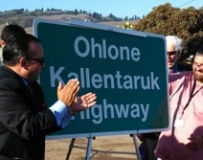 The portion of Route 129 between Blackburn Street and Murphy Crossing Road, in the County of Santa Cruz, (~ SCR 0.529 to SCR 4.747) is named the "Ohlone Kallentaruk Highway". It was named in honor of the Ohlone Kallentaruk people, who have contributed over 13,000 years of cultural, economic, and environmental traditions to the history of the Pajaro Valley. The Ohlone Kallentaruk people settled in the Pajaro Valley, near the Pajaro River, and in the Watsonville wetlands and sloughs. These areas are rich in natural resources and contain an abundance of plant and sea life used for commerce and everyday life. The Ohlone Kallentaruk people have contributed to the present-day understanding of Native American culture and history and continue to work diligently to preserve the environment and teach people how to coexist with Earth. Named by Assembly Concurrent Resolution 100, Resolution Chapter 109, on September 4, 2012.
(Image source: Santa Cruz Sentinel)

In 1929, Chapter 767 defined the route from “[LRN 4] near Bakersfield to Fresno-General Grant National Park Road” as a state highway. In 1935, this was codified as LRN 129 in the highway code with the definition:

“[LRN 4] near Bakersfield to [LRN 41] near General Grant National Park.”

Originally, LRN 129 ran along the Famoso-Porterville Highway and Richgrove Drive (although the portion from the Delano Lateral to Route 65 may have also been LRN 136; the actual allocation of the Famoso-Porterville Highway is unclear). Starting in the 1940s, a new alignment for LRN 129 was constructed from Oildale, and in 1947, the signage of Route 65 was moved from the original LRN 129 to the new routing. The Richgrove portion eventually became County Sign Route J35.

This route ran from Route 99 near Bakersfield to Route 180 near General Grant National Park (present-day Kings Canyon National Park). This was signed as Route 65 (along Famosa-Porterville until 1947, and then along the current routing). It is present-day Route 65 between Route 99 and Exeter, and as Route 245, formerly Route 69, from Exeter to Route 180.