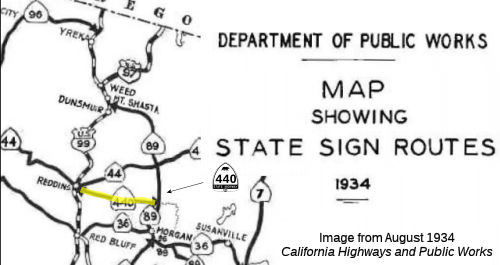 This route ran from US 99 in Redding to Lassen National Park via Viola. It was signed as part of the original state signage of routes as Route 440, and was an extension of LRN 20, defined in 1933. In 1935, it was re-signed as Route 44.

Route 440 originated on the outskirts of Redding near the east bank of the Sacramento River at US 299.  The original alignment of Route 440 split from US 299 east of the 1908 Redding Free Bridge near what is now the intersection of Parkview Avenue and Hartnell Avenue.  From US 299 the route of Route 440 followed modern, Cypress Avenue, Church Creek Road, Hartnell Avenue and Old 44 Drive to east to Millville.
(Source: Gribblenation Blog (Tom Fearer), "California State Route 44 and California State Route 440", September 2020)

In the 1938 timeframe, there was a three phase project to improve US 99/US 299/LRN 3 north of downtown Redding and the Sacramento River.  Phase 1 included the completion of the 795 foot long plate girder 1935 Sacramento River Bridge.  The 1935 Sacramento River Bridge likely played a huge factor in why the original Route 44 was reassigned as US 299 during 1935. Phase 2 included a new direct alignment of US 99/US 299/LRN 3 on Market Street from the north bank of the Sacramento River to Sulpur Creek, which was completed in December 1935.  Phase 3 was completed during July 1937 between Sulpur Creek and Boulder Hill.  The Phase 3 project included a new interchange where US 299/LRN 28 split towards Alturas.  The shift in US 299 extended Route 440 west over the 1908 Redding Free Bridge via what is Smile Place and Parkview Avenue to US 99/Market Street south of downtown Redding. It was during the transition to US 299 that Route 440 was resigned as Route 44.
(Source: Gribblenation Blog (Tom Fearer), "California State Route 44 and California State Route 440", September 2020)