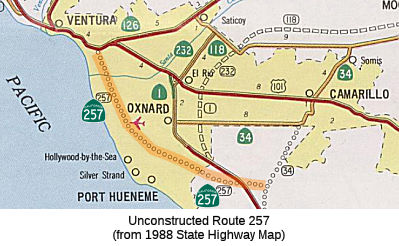 Scott Parker on AARoads noted: There was neither any adopted nor existing alignment for unbuilt Route 257; its general E-W section was well south of the 5th street extension that runs along the Metrolink tracks as part of Route 34. From the draft maps of the time, Route 257 terminated at the then-future Route 34 alignment a couple of miles north of Route 1 north of Point Mugu, crossing Route 1's alignment near where the through route currently veers north onto Rice Avenue, continuing WNW from there to Port Hueneme before turning to parallel the coast before terminating at US 101 east of central Ventura between the Route 126 and Route 33 interchanges. Clearly Route 257 was a "developmental" road, intended to serve the housing developments south of Camarillo as well as the coastal recreational area between Hueneme and Ventura. The likelihood of that road ever being built are very, very slim and none.
(Source: Scott Parker on AARoads, "Re: CA 34", 11/9/2019)

This route was not defined in the state highway system before 1963.

This routing is unconstructed. This routing was planned as freeway; it was never upgraded. The traversable route is 5th Street and Harbor Blvd west of Route 1. It is a circuitous route around Plaza Park in Oxnard. Caltrans has no plans to adopt this route.