From Rice Avenue in the City of Oxnard to Route 118 near Somis.

In 1963, Route 34 was defined as the route "from Port Hueneme to Route 118 near Somis.". This included the routing along Hueneme Road and Saviers Road to Route 1

In 1965, the portion from Port Hueneme to Route 1 was legislatively deleted, changing the definition to "from Route 1 between Point Mugu and the City of Oxnard to Route 118 near Somis.". For the existing signed route, this technically removed the portion of the route on Hueneme Road and Saviers Road, truncating the route to start at Route 1 at 5th Street and Oxnard Boulevard1. However, that deleted portion remained on the state highway maps until at least 1970, disappearing by the 1975 map. Quite likely, what happened is that it took until the early 1970s to relinquish the route to the local entities, and so it remained as signed Route 34, and was state maintained, even though it was no longer part of the official definition (think something along the lines of Route 34U). But the state highway maps since 1965 also show a new alignment (likely a freeway alignment) running from the curve in 5th Street near Pleasant Valley Road diagonally parallel to Lewis Road, Las Posas, and Hueneme Road to Point Mugu. That alignment (unbuilt) remained on the books until the the late 2000 relinquishments, and was officially deleted in the 2014 change in the legislative definition.2
(1 Source: Gribblenation "California State Route 34" (Tom Fearer), 8/11/2019; 2 DPF research triggered by Gribblenation)

In March 2013, the CTC relinquished right of way in the city of Oxnard on Route 34 from Oxnard Boulevard (Route 1) to Rice Avenue, under terms and conditions as stated in the relinquishment agreement, determined to be in the best interest of the State. Authorized by Chapter 717, Statutes of 2008, which amended Section 334 of the Streets and Highways Code.

This route was LRN 153, defined in 1933, running from Hueneme to LRN 9 (Route 118) near Somis. Route 34 was not including in the original set of signed state routes in 1934. It is unclear when this routing was first signed as Route 34.

The original definition of LRN 153 (Route 34) began at Port Hueneme on Hueneme Road and swung north into Oxnard via Saviers Road. LRN 153 multiplexed LRN 60 (future Route 3 and US 101A) on Oxnard Boulevard to 5th Street. From 5th Street the route of LRN 153 is almost identical eastward to Somis as modern Route 34. The original alignment of LRN 153 can be seen on the 1935 Division of Highways Map of Ventura County.
(Source: Gribblenation "California State Route 34" (Tom Fearer), 8/11/2019)

There are plans to widen this route in the city of Camarillo (August 2002 CTC Agenda). 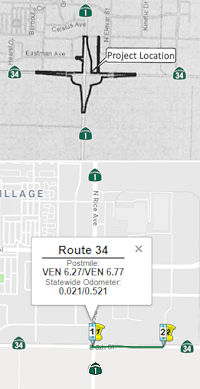 In June 2018, the CTC approved for future consideration of funding: 07-Ven-34, PM 6.27/6.77 On Route 34: Rice Avenue Grade Separation Project: Construct a grade separation structure at an existing intersection of Rice Avenue and Fifth Street in Ventura County. (FEIR) (PPNO 4961) (TCEP). This project is located at the Rice Avenue Grade Separation in the city of Oxnard in Ventura County. The project proposes to construct a grade separation at the existing Rice Avenue and Fifth Street intersection. The project proposes to eliminate an existing at-grade railroad crossing. The purpose and need of the proposed project is to eliminate the conflict between vehicles and trains at the railhighway crossing and to address future traffic and circulation issues forecasted for the project area. The proposed project is estimated to cost $79.2 million. The project is currently programmed for $81.2 million in the Senate Bill Trade Corridor Enhancement Program (TCEP), Regional Surface Transportation Program, Federal and Local programs. This project is determined to be a Delegated Project under the Federal Highway Administration (FHWA) and to be administered per the Project Responsibilities List in the Joint Stewardship and Oversight Agreement between FHWA and the California State Department of Transportation. The project is estimated to begin construction in 2020. The scope, as described for the preferred alternative, is consistent with the project scope programmed by the Commission in the TCEP.
(Source: CTC Agenda, June 2018 Agenda Item 2.2c(23))

In December 2019, the CTC had on its agenda a request to amend the TCEP Project Scope for the Rice Avenue & Fifth Street Grade Separation project, in Ventura County, to update the baseline agreement, benefits, project delivery schedule, preconstruction and construction costs. The Rice Avenue & Fifth Street Grade Separation project will construct a grade separation at the intersection of Route 34/Fifth Street and Rice Avenue in the city of Oxnard. Union Pacific Railroad tracks run parallel to Route 34/Fifth Street, and the grade separation will elevate Rice Avenue over both Route 34/Fifth Street and the railroad crossing. The project will eliminate conflict between vehicles and trains at the rail-highway crossing, improve the flow of truck traffic to the Port of Hueneme, and increase safety by eliminating the at-grade crossing. This intersection ranks second on the California Public Utilities Commission (CPUC) Priority List which establishes priority projects for eliminating or altering hazardous railroad crossings.

The current approved scope for the grade separation, alternative 2A, includes the construction of two connector roads, one in the southeast quadrant and another in the southwest quadrant of the Rice Avenue grade separation, to provide access between Rice Avenue and Route 34/Fifth Street. It also includes traffic signals for both connectors, new sidewalk, and bicycle lanes. During the design phase of alternative 2A, additional information from utility companies became available which modified the original utility assumptions performed in 2017. Utility relocation cost assumptions made during the original estimates were assumed to be lower and relocation costs covered by utility companies. In January 2019, six months into the PS&E phase for alternative 2A, utility companies provided prior rights easement documents, cost estimates for relocations, and preliminary plans, which were higher than original utility relocation cost estimates. Utility companies provided more complete data on costs to prepare relocation plans, administer, inspect, and have their facilities relocated. Cost estimates provided by each utility company were not available at the time of TCEP application. As a result, the cost estimate for the utility relocations have been adjusted accordingly. In addition, estimates for property acquired through condemnation also have undergone revised fair market value analysis. The cost estimate provided in the Project Report for RW acquisition was based on price for prior sale per square footage. Although the possibility of condemnation was known at the time of the TCEP application, there was still a strong possibility it would not be required in which case the acquisition could have been done by the County of Ventura, and that is what the original cost and schedule was based upon. When the likelihood of condemnation became more apparent, it became necessary to transfer the lead for RW to the Department. Property acquisition requires a complete eminent domain process. Additional time is required to obtain permits to enter from the property owners through writ of assistance (3-4 months); the time it takes (3-4 months) for collecting soil samples including, testing, analyzing and completing the hazardous waste investigation report; and a longer timeline for the property owners to respond to written offers. The original schedule did not foresee this longer timeline.

Also in December 2019, the CTC had this project its agenda for future consideration of funding: 07-Ven-34, PM 6.27/6.77 Route 34 in Ventura County. Construct a grade separation on Route 34 at Rice Avenue in the city of Oxnard in Ventura County. (PPNO 4961). This project is located at the Rice Avenue/Fifth Street (Route 34)/Union Pacific Railroad (UPRR) track intersection in Ventura County. The project proposes to construct a grade separation on Rice Avenue where it crosses over Route 34 and the UPRR. The proposed project addresses the need to reduce conflict between vehicles and trains as well as future traffic and circulation issues forecasted for the project area. The project also proposes to construct two connector roads. This project is fully funded and is currently programmed in the 2018 STIP for $79.2 million with plans to increase programmed funding. Construction is estimated to begin in 2022.
(Source: December 2019 CTC Agenda, Agenda Item 2.2c.(8)) 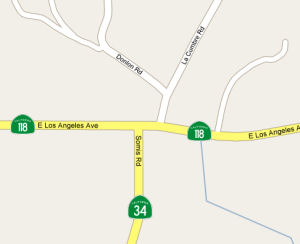 In February 2009, the CTC received notice of preparation of an EIR for reconstruction of the Route 118/Route 34 interchange in Somis. The proposed project would construct roadway improvements that include relocating and realigning Route 118 at Donlan Road, and adding a westbound left-turn lane in the westbound direction of Route 118, an eastbound auxillary lane, and interchange ramp improvements along portions of Route 118 and Route 34 intersection in the community of Somis in Ventura County. The project is included in the State Highway Operation and Protection Program Long Lead Project List. Future funding for project design, right of way, and construction will be programmed later pending completion of the environmental clearance. The alternatives being considered are:

Moorpark officials reviewed the draft EIR, and believe that it fails to take into account a plan by Ventura County to realign Donlon Road so that it joins to make a four-way intersection where the two state highways meet. They also believe that it does not provide mitigation of an expected increase in truck traffic and related air quality, noise and safety impacts on Route 118 as a result of projects planned by Caltrans.

In October 2012, it was reported that Caltrans has dropped plans to revamp the Somis interchange. Caltrans will include its decision in the project's environmental impact report that will be issued by the end of November 2012. The county now wants to realign Donlon to make a four-way intersection at Route 118 and Somis Road. According to the county, Caltrans can make "easy, quick and cheap fixes" in conjunction with the county project, such as lengthening a left-turn lane from westbound Route 118 to Somis Road.

Evidentally, Route 34 (while still just LRN 153) was planned to be the "Calleguas Freeway", according to a 1962 California F&E map for Ventura County.

The route that was to become LRN 34 was first defined in the 1909 First Bond Issue as running from [LRN 4] near Arno to Jackson. In 1911, the definition of the Alpine State Highway extended LRN 34 with the segments from Route 99 to Route 88 SE of Ione and from Route 104 to Route 89:

"The certain road commencing at the Calaveras big tree grove located in Calaveras County thence running to Dorrington in said county, thence E-ly following what is known as the Big Tree and Carson Valley Turnpike to Mt. Bullion in Alpine Cty, thence along county road to Markleeville in Alpine Cty, thence along that certain road via Kirkwood, Silver Lake, Pine Grove and Irishtown to Jackson in Amador Cty, including therewith the road from Picketts in Hope Valley connecting with the Lake Tahoe Wagon Road, a state highway, at Osgood's Place in El Dorado Cty, and the road from Mt Bullion via Loupe in Alpine Cty to Junction in Mono County connecting with the Sonora and Mono State Highway is hereby declared and established a state highway and shall be designated and known as "Alpine State Highway""

[LRN 4] near Arno to [LRN 23] near Pickett's in Hope Valley via Jackson, Irishtown, Pine Grove, Silver Lake, and Kirkwood.

This was primary state highway from Arno to Jackson.