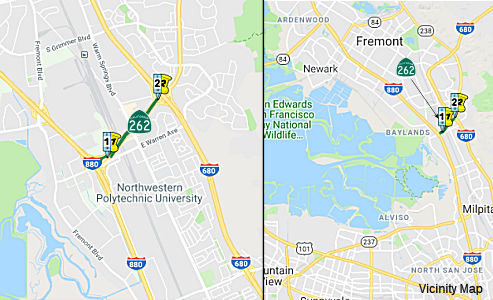 Note: For information on the reference to Route 237, see Route 237.

In 1965, Chapter 1371 defined Route 262 as “Route 17 to Route 680 near Warm Springs. Route 262 shall cease to be a state highway when Route 237 is constructed between Route 17 and Route 680.” This routing was once planned as part of Route 17. For a short time Route 17 was placed on what is known as Oakland Road, which runs just east of the present-day I-880 between San Jose and Milpitas. It became Main Street in Milpitas and then met present-day Route 262 in Fremont at Warm Springs Blvd and Mission Blvd. Today's I-880 freeway was just signed as I-680 then. Later on, after the new I-680 alignment was finalized, Oakland Road and Main Street were signed as Route 238, since that portion of Mission Blvd south of the present terminus of Route 238 was signed as Route 238 to Warm Springs. Today's I-880 freeway was signed as Route 17 and Temporary I-680 north of US 101 to the junction of Route 262 and Route 17 and Temporary I-280 south of US 101 to the junction of US 280. Note that Mission Blvd crosses I-680 twice. At the first (northern) crossing it is signed as Route 238 and this is the present terminus of Route 238. At the second (southern) crossing it is signed as a connection to I-880; this is the eastern terminus of (unsigned) Route 262. Also, the city of Milpitas built a new alignment for Main Street, so present-day maps do not show how Oakland Road connected with Mission Blvd in Warm Springs via Main Street. Route 262 is the 1 mile Mission Boulevard connect in Fremont.

One of the major obstacles to constructing a freeway-to-freeway connector along the present Route 262/Mission facility is the fact that the surface portion of the route from Warm Springs Road to I-680 is lined with dense retail development, complete with multiple driveways. For better or worse, the Route 262/I-880 interchange was rebuilt a few years ago, including high-speed ramps and flyovers directing traffic onto Route 262 east, ducking under twin UP tracks plus the new BART extension bridge; it's in a trench at that point. But as soon as it emerges from the BART overpass, it rises to the surface right at Warm Springs and then slogs through the commercial zone until it hits I-680 about 3/4-mile east. It appears that the only way to convert this segment to freeway would be to continue the trench eastward under Warm Springs (likely in a narrow 2+2 box-sided facility), with frontage roads on either side; access to the commercial establishments would be via Warm Springs Rd. and Warren Ave, which more or less parallels Route 262 a couple of blocks to the south.

As currently configured, the newly-installed high capacity/high speed ramps from I-880 to east Route 262 deposit traffic into the trench under the RR tracks and the new BART extension. Immediately after the BART bridge the facility rises to ground level to intersect Warm Springs Blvd. Deploying an elevated facility here would require a substantial gradient to take traffic to and from the trench to the elevated section -- the gradient would likely exceed the 6-8% normally considered maximum for freeway mainlines. The area is too densely developed to realign a full-length elevated facility north or south of existing Route 262; and having recently spent millions on the I-880/Route 262 upgraded interchange, it's unlikely Caltrans or Alameda CTC would consider such a facility in the foreseeable future. The issue, of course, is the fact that when the Route 237 freeway alignment that veered north of its current route, crossing I-880 near Dixon Landing and terminating at I-680 near Scotts Creek (ghost ramps are still visible), was still an active proposal any ROW preservation along Route 262 was dropped, leaving the situation as it sits today.

It's not any particular fondness for these businesses that has prevented a direct freeway connection, it's the generalized opposition to any new freeway facilities in the region that has hampered any efficient connection here rather than any specific opposition to a project at this location. Slapping down a partial cloverleaf at the I-680/Route 262 interchange effectively shuts out the possibility of a full freeway cross-connection between I-880 and I-680 for the near term. This is a repeat of the north Route 84/I-880 situation at Decoto Road several miles north; while both facilities are full freeway; there still -- after about 20 years -- is no freeway-to-freeway connection there. The local COG's are calling the shots; undertaking any project that even looks like it expedites intraregional automotive commuter traffic is a non-starter (and the ones that do make it under the wire are, these days, generally tolled!).
(Source: Scott Parker (SParker) at AAroads, 7/17/2016; 7/18/2016; 7/26/2016)

Remember that up to the mid-1990's it was expected that the Route 237 freeway would be built on its original planned alignment across to I-680 near Scotts Creek (the "ghost" grading for that interchange can be seen along I-680 south of the Mission/Route 262 interchange).   At that point, it was planned that Route 262 would be relinquished when the Route 237 freeway was completed, so the underpowered cloverleaf (at least there are collector/distribution lanes along I-680) remained as it was when opened in 1971.

Note that Route 262 has the distinction of having the most route designations of any state highway:
(Source: AARoads Discussion: Chris Sampang "Route 262 freeway upgrade proposal in Fremont", 10/30/2020)

This used to be short connecting segment of LRN 69 ((a), "including a connection to [Route] 5 near Warm Springs"), added to the state highway system in 1933.

According to an observer, although the route is signed at the exit from I-680 south, there are NO reassurance shields along the route. Westbound Route 262 is signed as 'TO I-880' and Eastbound Route 262 is signed as 'TO I-680'. Intersecting city streets have trailblazers pointing motorists to either Route 680 or Route 880. The route is constructed to freeway standards from I-880 to 0.7 miles east of I-880 at Warm Springs Blvd. This short freeway section has it's own exit and interchange, at Warren Avenue. At the east terminus of Route 262 (I-680) bridge markings call this the 'Route 680-238 separation'.

As of Spring 2021, there were a few trailblazers posted.

In July 2022, it was confirmed that Route 262 in Fremont finally has a pair of reassurance signs.  The Eastbound sign is just before the intersection with Warm Springs Boulevard.  The Westbound is just past the intersection with Brown Road.  The signs are visible on Google Street View--the Eastbound sign is probably impossible for a civilian to get a photo of it.  The Westbound looks doable.
(Source: Messenger Discussion, Glen Norman, 7/9/2022) 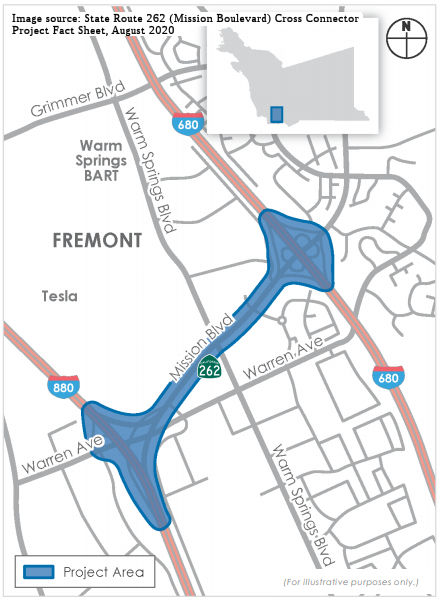 In 2002, Caltrans conducted a study about building out Route 262 as a freeway, in order to relieve traffic congestion. Note that this is not the upgrading of Route 237 mentioned in the legislative definition. According to an article in the Mercury News, there are six possible routes, from Auto Mall Parkway in the north to Montague Expressway in the south. Most plans entail road improvements, such as street widenings or making bridges over city intersections. According to this article, the Fremont connector will be selected from four alternatives: (1) The Fremont and Grimmer alternative; (2) Auto Mall Parkway, which could be widened to six lanes with a bridge over Osgood Road; (3) Mission Boulevard, which could burrow underneath Warm Springs Boulevard; and (4) Scott Creek Road, Milmont Drive and Dixon Landing Road, which could each be widened. The Milpitas connector will be selected from two alternatives: (1) Calaveras Boulevard, which could be widened to six lanes with a bridge over Abel Street; and (2) an eight-lane Montague Expressway, which would have a bridge over Great Mall Parkway. This study is actually TCRP Project #6, and would run from I-680 to I-880. It was requested by the Santa Clara Valley Transportation Authority. However, it looks like this will not happen, as it is reported in 2004 that it would cost about $750 million to close the gap, presumably with a six-lane freeway, interchange at Warm Springs, and freeway interchange at I-680.
(Image source: Alameda CTC Route 262 Cross Connector Project Page, October 2020)

The Santa Clara Valley Transit Authority (VTA) is presently building an elevated light-rail right-of-way in the median strip of Great Mall Parkway, which becomes Capitol Avenue at Montague Expressway, which goes over Montague. This implies that the "Milpitas Connector" option (2) most likely won't happen, since that would require Montague to go over not only Great Mall Parkway, but also over the new elevated light-rail tracks.
(Thanks to Larry Silvey for this information.)

In October 2020, it was noted that the Alameda CTC has a page about the "SR-262 (MISSION BOULEVARD) CROSS CONNECTOR" project. It noted that the Route 262 (Mission Boulevard) Cross Connector Project proposes to improve operations and safety along and in the vicinity of Route 262, a major east-west connector between I-880 and I-680. Early feasibility/corridor studies recommended improvements along Route 262, including improvements at the intersections, at the Route 262/I-680 and Route 262/I-880 interchanges, as well as along Auto Mall Parkway and Grimmer Road. It noted that Alameda CTC will soon embark (the fact sheet was dated August 2020, so soon would be late 2020/early 2021) on preparing a project initiation document (PID) for the project, in cooperation with the City of Fremont and Santa Clara Valley Transportation Authority that will culminate in the completion of a scoping document required for soliciting federal and state funding. A list of potential improvements include, but are not limited to the following: ‣ Improve geometry at the Route 262/I-680 Interchange; ‣ Provide level separation at the Route 262/Warm Springs Intersection; ‣ Widen Route 262 to six lanes, between the Warm Springs Intersection and I-680; ‣ Construct a high-occupancy vehicle (HOV)/express lane to HOV/express lane direct connector between I-880 and I-680; and ‣ Depress the Route 262 alignment to separate local and regional traffic. The fact sheet notes that alternative solutions will be developed to improve east-west regional connectivity traveling between I-680 and I-880 in Southern Alameda County. The alternatives are intended to encourage mode shift from single-occupancy vehicles to increase vehicle occupancy and person through-put by promoting multimodal components through the corridor.
(Source: AARoads Discussion: Chris Sampang "Route 262 freeway upgrade proposal in Fremont", 10/30/2020)

There is also a project that is building a new 3-way freeway interchange (semi-directional T) and a functionally separate 4-ramp interchange with Warren Ave, which will be extended over the freeway. The road was severed in the 1950s when Route 17 was built there. 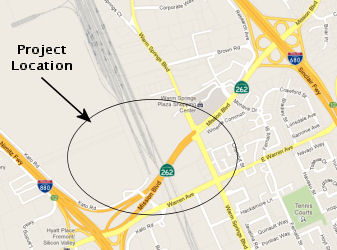 In March 2012, the CTC approved for future consideration of funding a project in Alameda County that will replace the Union Pacific Railroad bridges over Route 262, widen Route 262 between Kato Road and Warm Springs Boulevard, and construct ramps to Kato Road in Fremont, as the final phase of the overall Route 262/Warren Avenue/I-880 Interchange Reconstruction and I-880 Widening Project. This is a State Route 84 Local Alternative Transportation Improvement Project (LATIP) approved by the California Transportation Commission at the January 2010 meeting. The project is fully funded with federal and local funds. The project is concurrently requesting advanced funding at the March meeting. The request is consistent with Assembly Bill 1462, which allows a local agency to advance projects in the LATIP with local funds, to be repaid with revenues from excess lands when funds become available. The total estimated project cost is $52,800,000 for capital and support. Construction is estimated to begin in Fiscal Year 2011-12.

In October 2016, the CTC authorized relinquishment of right of way in the city of Fremont along Route 262 on East Warren Avenue and Kato Road (04-Ala-262-PM R0.1/R0.4), consisting of collateral facilities. The City, by letter dated August 24, 2016, agreed to waive the 90-day notice requirement and accept title upon relinquishment by the State.