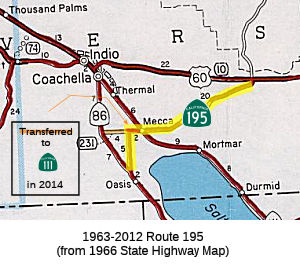 In 1972, Chapter 1216 deleted the portion between Route 111 and Route 10, and added a sunset condition: "Route 86 near Oasis to Route 10 near Shaver's Summit Route 111 near Mecca via Pierce Street and Avenue 66 and Mecca. This route shall cease to be a state highway when Route 86 Freeway is constructed from near Oasis to Route 10."

By 2003, it appears that Route 195 had been decomisssioned, although it still remains on the books, and shields remain up. 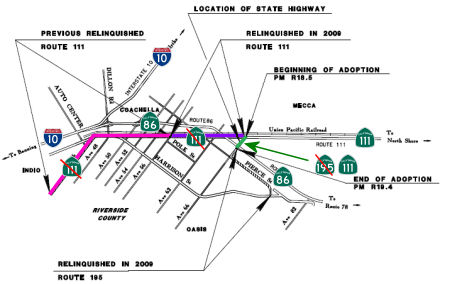 In 2014, a portion of former Route 195 was moved to Route 111. The route adoption noted the history of the route, and specifically noted how, in March 1988, a supplemental project reported was completed for a Route 86 expressway between Avenue 82 and Avenue 66 (Route 195) and for a freeway between Avenue 66 and Dillon Road. This supplemental project report down scoped the previously approved project on Route 86 from a four lane freeway to an expressway between Avenue 82 and Avenue 66. In 2001, the Route 86 Expressway (Route 86S) was completed. The expressway runs from I-10 at Coachella to join Route 86 at Oasis. The segment from Mecca to Coachella is a joint section of Route 86 and Route 111. Additionally in 2001, a supplemental project report was completed to address specific terms of the rehabilitation and relinquishment of existing Route 86, Route 111 and Route 195 in the area. In 2009 the relinquishments for Route 86, Route 111 and Route 195 were completed. However, a one mile section of Route 195 between Route 86S (renumbered to Route 86 in December 2012) and Route 111 (Avenue 66) was not relinquished. Given the definition of Route 195 (which indicates it is no longer a state route), in December 2014 this segment was adopted as Route 111 Post Mile R18.5 to R19.4.

In 1935, LRN 146 was added to the highway code with the following routings:

All of these portions were signed as Route 195. In 1940, US 95 was extended into California all the way to Blythe. At this time, both NV 5 and Route 195 were renumbered as US 95. It appears that Route 195 signage was removed from the portion S of Blythe at that time (at least it isn't shown on maps). The portion of LRN 146 from Blythe S to Palo Verde would be extended SW to Brawley in 1959, and the entire route renumbered as Route 78 in 1964, although the portion S of Palo Verde was signed as County Sign Route S78 until construction was completed.

Additionally, according to Scott Parker on AAroads: "1934-era Route 195 was ever-so-briefly part of US 91 prior to US 95 being commissioned over that route plus the remainder of Route 195 down to Blythe. US 66 originally followed the Santa Fe (now BNSF, of course) main line that paralleled its Goffs Rd. alignment before the cut-off that's now part of I-40 was built in the '30's. The commissioning of US 95 came at approximately the same time as that of US 395 to the west, which subsumed both the northern part of original Route 7 but also the original Route 95 between US 66 at Hesperia via Kramer Corners to Inyokern. For the first quarter-century of the CA state highway network, the designation of the desert arterials was constantly in a state of flux until the U.S. highway system essentially "maxed out" right after WW II. According to Tom Fearer, the 1926 State Highway map shows US 91 ending in Daggett, but by 1928 the state maintenance had shifted west to Barstow to 1st Avenue.
(Source: Scott Parker (SParker), Tom Fearer (Max Rockatansky). on AAroads, 4/19/2018)

The Route 86 expressway has been completed; as of 2003, however, the state highway signage for Route 195 has not been removed.

In 1933, Chapter 767 defined the route from "[LRN 2] near Oceanside to Descanso-Temecula Road near Lake Henshaw" as part of the state highway system. In 1935, this route was added to the highway code as LRN 195, with the definition:

This definition remained unchanged until the 1963 renumbering. It ran from US 101 (present-day I-5) near Oceanside to Route 79 near Lake Henshaw. This is present-day Route 76.