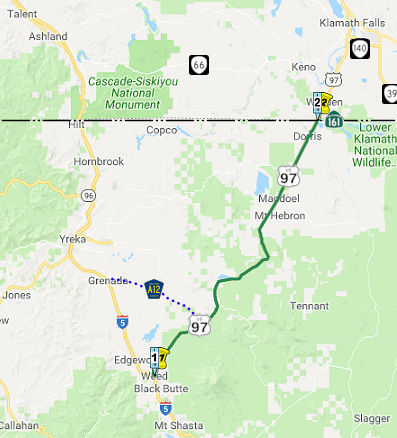 From Route 5 in Weed to the Oregon state line near Dorris.

This route was defined in 1963 as the route from "Route 5 at Weed to the Oregon state line near Calor."

In 1965, Chapter 1402 changed the origin to "Route 5 at Highway Avenue Interchange in Weed"

In 1984, Chapter 409 relaxed the routing to "Route 5 at Highway Avenue in Weed to the Oregon state line near Calor Dorris."

This route was signed as part of the original signage of US routes in California in October 1934. It was LRN 72 defined in 1931.

Note: Much of the history discussed below is summarized from two postings in the Gribblenation Blog: "Former US Route 99 in Weed (US Route 97 and California State Route 265 on Weed Boulevard)", November 2020; and Exploring the southern terminus points of US Route 97 in Oregon and California, October 2021. 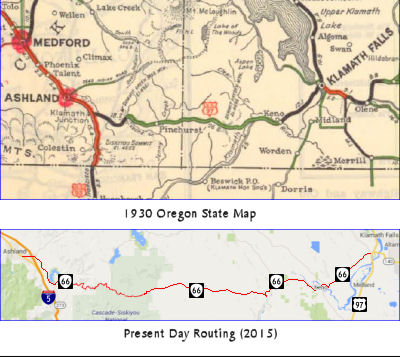 Before 1934, US 97 was defined to start (i.e., its southernmost point) in Oregon, on former US–99 (now I-5) S of Ashland OR. The routing between Ashland OR and Klamath Falls OR appears to have been along what is now OR 66. As originally defined, US 97 followed Dalles-California Highway #4 southward into Klamath Falls and westward via the Green Springs Highway #21 towards US 99 near Ashland.

On the Oregon side, the actual route goes back to 1925-1927, at least on the Oregon side. Official Oregon highway maps from 1930-1935 show that the route also existed in California in that time. Specifically, the road south from Klamath Falls went through Doris as of 1930, though it looks like it was realigned when was paved around 1933. On the Oregon side, the portion of the road between Klamath Falls to the California border was Klamath County Market Road 1 until it was taken over by the state of Oregon on November 13, 1931, as Midland Highway #420, a secondary state highway.
(Reference: ODOT's "History of State Highways in Oregon", 2011 edition)

Entering Oregon at Biggs, crossing US 30 and following Sherman Hwy. to a junction with The Dalles-California Hwy.; thence on The Dalles-California Hwy. via Bend and Klamath Falls to a junct. with Secondary #420 east of Klamath Falls; thence on Secondary #420 via Worden and Midland, leaving Oregon north of Dorris. (Note: At present, US 97 extends west from Klamath Falls to a junct. with US 99 south of Ashland. The above routing contemplates the change being sanctioned by the California Highway Dept. and the American Association of Highway Officials so that US 97 will connect with US 99 at Weed, California.)


In California, CHPW noted that, in 1931, the legislature incorporated a road from Weed on the Pacific Highway, to the Oregon line north of Dorris, into the state highway system. This was designated as LRN 72 and was locally known as a part of the Weed-Klamath Falls highway. Having in mind the relative importance of the Weed-Klamath Falls Highway as a unit of a major transportation system, both Oregon and California began improving the route as rapidly as finances permitted. In 1931, the distance from Weed to Klamath Falls was 63 miles in California and 21 miles in Oregon, a total of 84 miles of low standard, dusty, and, in California, mostly one-way county road.

It appears that US 97 was rerouted officially to Weed on June 23, 1934, as that was when the routing decision was actually made. This is based in the August 1934 correspondence between Oregon State Highway Engineer Baldock and AASHO Executive Secretary Markham in which the latter basically acknowledges in his response that the changes have been made but also cautions that they were still “attempting to get this information ready for the State Highway Departments” and that they didn’t want “any publicity on the numbering until about the time of the Convention.” It appears that this change was not publicly announced in Oregon until November (mid-November internally;late-November to the public). In California, the first appearance of US 97 was in the August 1934 issue of CHPW. Jonathan Ledbetter also found some information in the December 1938 issue of CHPW related to US 97. At the time, the plan was for much of existing LRN 72 to be cutoff by a new alignment that bypassed numerous railroad sidings in favor of a route via Grass Lake.  Existing LRN 72 was to be upgraded to a standard that would permit major through traffic.

In 1935, the original alignment of US 97 entered California via Dorris southward.  From Dorris, US 97 passed through Macdoel and Mount Hebron southward via Old State Highway towards Bray.  From Bray, US 97 traveled westward on Forest Route 8001, Forest Route 44N25, and over Butte Creek via Tenant Road.  US 97 followed Alder Creek Road and Deer Creek Mountain Road where it joined the modern highway alignment at the siding known as Cougar.  Notably all the communities described were Southern Pacific Railroad sidings that were  largely plotted out circa 1907, when a line was being built between Weed and the Oregon State Line.  Existing LRN 72 and early US 97 in California were essentially an overlay of the Southern Pacific Railroad frontage facilities.
(Source: Gribblenation Blog, "Exploring the southern terminus points of US Route 97 in Oregon and California", October 2021)

In 1936, Oregon completed her portion of the route to a high standard of alignment, grade and surface, eliminating railroad grade crossing and reducing the distance from the State line to Klamath Falls to 17 miles. According to CHPW, the most difficult unit of the route from the maintenance point of view was about three miles from Dorris to the State line. This inferior earth road over poor soil quickly became impassable after light rainfall. In 1933 this three miles was constructed on new alignment and grade with a 6-inch base course of crushed rock and a temporary armor type of surface. About the same time the existing road between Dorris and Macdoel, 10 miles, was improved with a road mix of oil and local cinders. While Oregon did have a road between Klamath Falls and California, it wasn't improved until 1936. This is likely describing when The Dalles-California Highway OR 4 was extended south from Klamath Falls to the California state line, taking over the portion of the Midland Highway OR 420 from Midland to the state line.

It does not appear that most of this route was signed before 1934, when it was signed as US 97. A small portion of the current route within Weed was signed as part of US 99.

LRN 72 first appears on the 1932 State Highway Map as a mostly unimproved roadway between Weed and the Oregon State Line. By 1934 the routing of LRN 72 was still shown as mostly unimproved with a intermediate section of roadway. The act to shift US 97 into California wasn't passed until October of 1934. By 1936 US 97 made an appear on the State Highway Map. From the Oregon State Line US 97 is shown as a High Type roadway south to Macdoel with a significant divergence following the railroad largely southward on unimproved roads. The US 97 divergence shown above on the 1936 State Highway Map can be seen in far greater detail on the 1935 California Division of Highways Map of Siskiyou County. The original alignment of US 97 can be observed passing through Macdoel and Mount Hebron southward via Old State Highway south towards the old rail siding of Bray. From Bray US 97 traveled westward on Forest Route 8001, Forest Route 44N25, and over Butte Creek via Tenant Road. US 97 followed Alder Creek Road and Deer Creek Mountain Road where it joined the modern highway alignment at the siding known as Cougar. By 1938 the modern alignment of US 97 can seen on the State Highway Map.
(Source: Gribblenation Blog: Volcanic Legacy Scenic Byway; US Route 97, California State Route 161, Tule Lake, and Lava Beds National Monument, 9/15/2018)

The rationale for the route (as noted in the April 1931 CHPW) was that geography dictated the routing for the Pacific Highway (US 99/I-5) through the north-central portion of California. To reach the Klamath Lake basin from LRN 3 (US 99, later I-5) near Weed required a salient easterly path through Oregon. The logical course for this path was a northeasterly diagonal departing from the Pacific Highway (US 99/I-5) after the latter passes north of the summit near Mount Shasta. This was an established course for both railroads and highways. The 1931 proposed routing was 44 miles shorter than a routing via the Shasta Canyon Highway over the Siskiyou Mountains. The proposed routing departed from LRN 3/US 99/I-5 near Weed, and took a direct course to the Orgon Highway near Calor. The route was felt to be an important interstate connection that would carry a large volume of state traffic.
(Source: Much of the information on the routing of US 97 in Oregon comes from research provided by Jonathan Ledbetter)

Weed Boulevard previously was the through segment of US 99 in downtown Weed of Siskiyou County, California.  Presently segments of former US 99 on Weed Boulevard are retained in the State Highway System as US 97 and Route 265. Approximately 0.430 miles of US 97 is aligned on Weed Boulevard along with 0.435 miles of Route 265.  The remaining 0.088 miles of Route 265 are aligned as access to I-5 via Chaparral Drive.  Notably, US 97 and Route 265 on Weed Boulevard are also co-signed as Historic US 99 in addition to Business Route 5. US 99 started life as LRN 3. By 1913, the Pacific Highway was created as a major Auto Trail between San Diego and Vancouver, British Columbia.  The Pacific Highway followed LRN 3 from the Oregon State Line south into downtown Red Bluff.  By 1917, a very early routing of LRN 3 from the Weed south to Redding entered Weed via what is now Old Edgewood Road and Weed Boulevard. By 1928, US 99/LRN 3 shifted to what is now Edgewood Road north of Weed .  It is likely US 99 was never signed on Old Edgewood Road, given when actual signage in the field started.

In 1951,  a new alignment of US 99/LRN 3 opened from the City of Weed 8 miles south to the vicinity of Mount Shasta City (specifically Spring Hill).  This new alignment of US 99/LRN 3 was much straighter than the original highway (built in 1923) and eliminated numerous curves between Weed-Mount Shasta City. The Federal Aid Highway Act, enacted on June 29th, 1956, put US 99/LRN 3 through Weed on the planned route of I-5.  By late 1959, Caltrans was planning a freeway alignment of US 99/LRN 3 north of Weed 3.2 miles to the Shasta River, as the existing US 99/LRN 3 on Edgewood Road was curvy and difficult to plow in the winter.  By 1963, the freeway alignment for I-5 started to replace the old US 99 alignment (Weed was finally bypassed by 1967). On June 29th, 1965, US 99 was approved to be truncated out of California by the AASHO Executive Committee; two weeks after that on July 15, 1965, Legislative Chapter 1402 extended US 97 south through downtown Weed via Weed Boulevard to the I-5 Highway Avenue Interchange, and created Route 265 that was routed north from US 97 via Weed Boulevard to the North Weed Interchange of I-5.

Caltrans is working on a project to realign Route 97 near Dorris. This project will bypass three 90° turns in the city, and provide a grade separation with the railroad. In February 2003, the CTC had on its agenda the route adoption of a freeway location for Route 97 near the City of Dorris, in Siskiyou County from 0.7 km south of Richardson Rd. to Sheepy Creek Rd. 02-Sis-97 KP 79.3/84.3 (PM SIS 49.3/52.4). This is probably related to the realignment.

This route also has the following Safety Roadside Rest Areas:

This was part of the Pacific Highway and the California-Banff "B" Route.

This route is part of the Volcanic Legacy Scenic Byway All American Road.

This route was designated as a "Blue Star Memorial Highway" by Senate Resolution 64 in 1961.

Overall statistics for US 97: