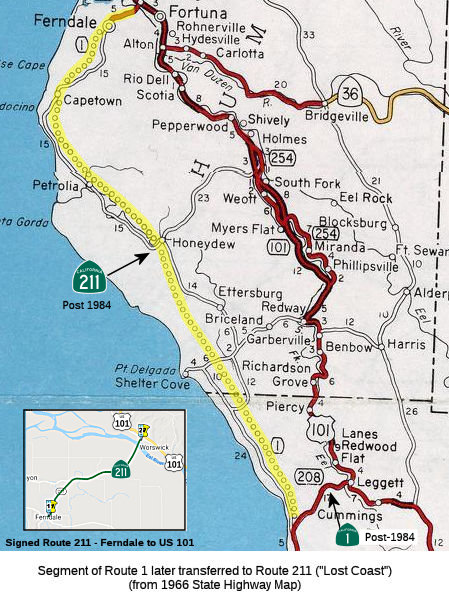 FromRoute 1 near Rockport to Route 101 near Fernbridge.

"There was never any field signage of the original Route 155 from Route 204 to the point where it was realigned toward Delano, which occurred in late 1966. Also involved in that process was the former Route 211, which headed east from Delano to the diagonal road that paralleled the (former) SP tracks northeast to Route 65 at Ducor. That diagonal alignment was the original Route 65 route, which diverged from US 99 near Famoso, where former US 466/present Route 46 intersects Route 99 today. In one fell swoop in 1966, Route 155 was commissioned from the turning point on Route 211 (which was never signed in the field) eastward on Garces Highway to the original Route 155 (former LRN 142) alignment, continuing northeast and east on the original alignment to the Lake Isabella area and its Route 178 terminus. The Route 211 designation was deleted from the books (but later re-used in Humboldt County). The portion of Route 155 from Bakersfield to the realignment point was subsequently relinquished."

In 1984, Chapter 409 redefined the route as "Route 1 near Rockport to Route 101 near Fernbridge". This was the result of a diversion of Route 1 was diverted to terminate at US 101; this was an unconstructed segment of Route 1 (SB 2471, Chapter 409). It is unconstructed from Route 1 to Ferndale. Traversable local roads between the US 101 and the Mendocino County Line include Chemise Mountain Road, Kings Peak Road, Wilder Ridge Road, and Mattole Road. These roads are not constructed to state highway standards and are unacceptable candidate highways for the state highway system. Between the Mendocino County Line and Route 1, the existing road is primitive and unsuitable for use as a state highway.

Will the "Lost Coast" highway ever be constructed? The consensus is that it is unlikely. Tom Fearer noted on AARoads that the terrain is far from conducive for building anything but a road that hugs the terrain.  The Lost Coast would require massive excavation of mountains that are at times thousands of feet high.  The terrain of Santa Lucia Range is essentially compacted mud which is why both regions are so slide prone, especially during rainy winters. Scott Parker added that when the Lost Coast extension of Rolute 1 was projected back in 1959 (now Route 211), much of the impetus from that came from logging interests looking for a more efficient way of hauling redwood out to the mills along US 101.  As the construction needs for redwood have long passed, and most of the mills are out of operation, there is little call and even less need for such a road.  Occasionally there have been proposals for a southward extension of Route 211 from Ferndale (principally as a recreational route), following forest roads and eventually cutting back to US 101 near Garberville. He agreed with Tom's description of the area as a huge mudpatch (resulting in extensive road closures during rainy periods), and that the cost of grading and ballasting would be out of line for the likely traffic levels for such a highway.  The final nail in the coffin is the chances of satisfying current environmental requirements plus the requirements of the Coastal Commission.
(Source: AARoads Discussion: "Re: Highway 1 through the lost coast", 1/20/2019) 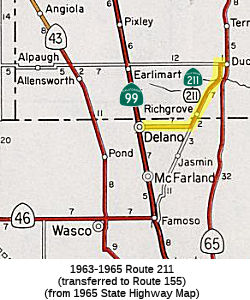 The 1963-1965 definition of Route 211 between Delano and the Famoso-Porterville Highways was part of LRN 136, defined in 1933. This portion is now Route 155 (which continues to the E to meet the former LRN 142 portion of Route 155). The portion along the Famoso-Porterville highway and Richgrove Drive was LRN 129, also defined in 1933. This was once Route 65. The Richgrove Drive portion is now County Sign Route J35.

The post-1984 routing was originally part of LRN 56, and was to have been signed as part of Route 1.

LRN 56 (Sign Route 1, eventual Route 211) was extended north to Ferndale to LRN 1 (US 101) in 1933.  Prior to 1933 the legislative description of LRN 56 had it's north terminus in Carmel and south terminus in San Luis Obispo. Tom Fearer notes that close examination of the map displayed in the August 1934 CHPW shows Route 1/LRN 56 as a functionally existing highway from Westport north to Fortuna.  He also notes that the 1934 Division of Highways State Map shows State maintenance of Route 1/LRN 56 from Mendocino north to Fort Bragg.  It also shows from Fort Bragg northward the implied route to Upper Mattole, and from Upper Mattole the implied through highway through the Lost Coast to Ferndale. Tom also examined the 1935 Goshua Highway Map of California, which shows Route 1/LRN 56 ending at Westport and the road continuing north to Kenny on Usal Road.  From Kenny the highway to Thorn Junction appears to have followed Briceland Road to Thorn Junction.  From Thorn Junction to Ettersburg the highway follows Ettersburg Road.  From Ettersburg to Honey Dew the through highway follows Wilder Ridge Road.  From Honey Dew the through route in the Lost Coast follows Mattole Road to Ferndale and the north segment of Route 1/LRN 56.  The 1935 Goshua Map doesn't offer any evidence that Route 1 was signed by the California State Automobile Association in the Lost Coast. Tom notes that the first Division of Highways Map to display a rough planned general alignment of Route 1/LRN 56 in the Lost Coast was the 1953 edition.
(Source: Tom Fearer, Gribblenation Blog, "Paper Highways; California State Route 1 through the Lost Coast")

The current routing is unconstructed from Route 1 to Ferndale and is not signed. The portion of the route between the Ferndale city limits and US 101 is signed. The traversable route in Mendocino County is Chemise Mountain Road, Wilder Ridge Road, and Mattole Road.

Route 1 and Route 211 from Mill Valley (Marin County) to Ferndale (Humboldt County) are named the "Shoreline Highway". The portion of the route between Rockport and Ferndale (Route 211) is not constructed. The road runs along the Pacific Shore. Named by Senate Concurrent Resolution 91, Chapter 239 in 1957.

This route number appears not to have been assigned by the California Legislature before the 1963 renumbering.