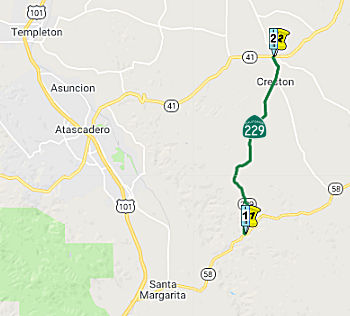 Route 58 near Santa Margarita to Route 41 near Creston

Originally Route 229 terminated at Route 41 at the Huerhuero Creek Bridge.  Following the 1995 floods on the Salinas River, Route 41 underwent improvements between Atascadero and Creston.  This resulted in a new Huerhuero Creek Bridge being built north of Creston which by proxy extended Route 229 a short distance.
(Source: Gribblenation Blog (Tom Fearer), “California State Route 229”, May 2021)

Route 229 is notable due to having a 6 mile long one-lane section and one of the lowest traffic counts in the State Highway System.  The northern 3 miles of Route 229 from Rocky Canyon Road to Route 41 is largely aligned over what was  US 466.  The entirety of Route 229 is signed on Webster Road.

This route is signed between Route 58 and Route 41. It is supposedly still signed (as of 2004) at the junction with Route 58. The road itself (Webster Rd) is only one lane wide from Route 58 north to a mile southwest of Rocky Creek Road, at which point it becomes a two-lane route all the way through Creston and to its terminus at Route 41. (On Route 41, there are signs pointing to Route 229 at that junction as well). The route itself doesn't seem to have any trailblazers but does have mileposts (a similar situation to Route 221 in Napa, which is signed at the junctions but not on the route itself).