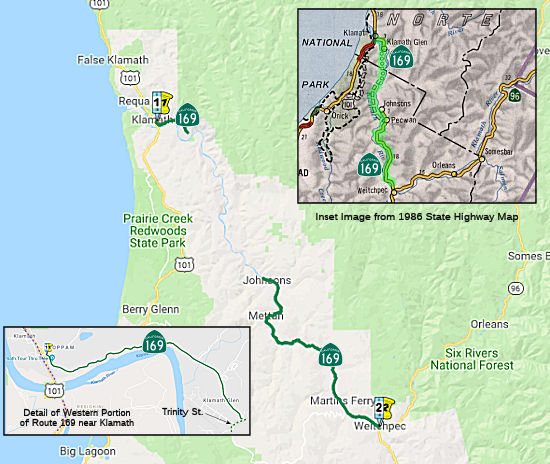 From Route 101 near Klamath to Route 96 near Weitchpec. Note that the legislative definition explicitly allows Caltrans to maintain a traversable highway located in portions of the area between the termini of and approximately on this route even though the highway is not continuous.

The original route of what would become Route 169 was added to the state highway system in 1919 as LRN 46, running along the route from Jct. US 101 at Klamath to Jct. US 99 near Yreka, via Klamath River. It appears as a projected route by the early 1920 and was under construction from 1922 to 1924. LRN 46 is shown as a functional highway from LRN 3/US 99 west to Weitchpec on the 1930 Division of Highways Map.  LRN 46 northwest to LRN 1/US 101 is shown to be a planned highway along the Klamath River.  Bald Hills Road is shown as a functional connecting local road from LRN 46 in Weitchpec west to LRN 1/US 101.
(Source for some material: Gribblenation Blog: Paper Highways; modern California State Route 169 the unfinished California State Route 96)

The 1934 signage of routes indicated that Route 96 would be signed and aligned over the unfinished LRN 46 from US 101 near Klamath east to US 99 near Yreka via the Klamath River (hence the name; Klamath River Highway).  In terms of present-day routing, the portion from US 101 at Klamath to Weitchpec is present Route 169, and from Weitchpec to US 99 (I-5) 9 mi N of Yreka is present-day Route 96.

By 1938, Route 96 was realigned off of LRN 46 south of Weitchpec to a new routing using LRN 84 to US 299 at Willow Creek.  LRN 84 was added to the State Highway System during 1933.  Tom Fearer surmised on the Gribblenation BLog that it was likely Route 96 was realigned via easier grades of LRN 84, as it followed the Trinity River to US 299.  The planned route of LRN 46 west of Weitchpec followed a far more flood prone Klamath River to US 101.  This left the original LRN 46 between Weitchpec and US 101 in the state highway system, but unsigned.
(Source for some material: Gribblenation Blog: Paper Highways; modern California State Route 169 the unfinished California State Route 96)

Floods in December 1955 on the Klamath River damaged LRN 46 between Weitchpec and Martins Ferry.  As a result, in 1959, Humboldt County applied for State aid for 43 new bridges.  One of the new bridges cited was just off of LRN 46 at Martins Ferry.   The new Martins Ferry Bridge is featured along with several other structures.  The Martins Ferry Bridge project reconnected Bald Hills Road to LRN 46 but also seems to have been the root of construction west towards Klamath.  By 1960, LRN 46 was extended west along the Klamath River to the Yurok Reservation.  The reminder of unbuilt LRN 46 along the Klamath River is shown not to have a determined routing.  This is as far as LRN 46 would ever come towards being completed.
(Source for some material: Gribblenation Blog: Paper Highways; modern California State Route 169 the unfinished California State Route 96)

This route is explicitly allowed to be non-continuous. Unconstructed from Terwer Riffle Road near Klamath Glen to to Wauteck Village near Johnsons Road along the Klamath River, although there are some primative logging roads that are unsuitable for use as a state highway. Part of the reason for the non-continuity is the fact that the portion from Klamath Glen to Johnsons lies within the Yurok Indian Reservation. Another reason for the discontinuity was a series of devastating floods in 1964. In 2002, Caltrans indicated a feasibility study was in progress for this route.

In August 2016, the CTC approved for future consideration of funding a project on Route 169 (01-Hum-169, PM 26.4/29.9) in Humboldt County that will repair slipouts on a portion of Route 169 near the community of Weitchpec within the Yurok Tribe Reservation. The project is programmed in the 2014 State Highway Operation and Protection Program. The total programmed amount is $7,790,000 for capital and support. Construction is estimated to begin in Fiscal Year 2016-17. The scope, as described for the preferred alternative, is consistent with the project scope programmed by the Commission in the 2014 State Highway Operation and Protection Program.

Bridge 01-0045 (now Bridge 01-0077, DN 002.58, rebuilt in 2006) at Terwer Creek in Del Norte county, is named the "Perry and Emma McBeth Memorial Bridge". It was built in 1949, and was named by Senate Resolution 138 the same year. Perry and Emma McBeth settled in Del Norte County in 1911 where they lived lives of generosity and selfless service to all the inhabitants of the lower Klamath.

In 1933, Chapter 767 added the route from "Spring Street to Firestone Boulevard via Somerset Avenue" to the highway system. In 1935, this was added to the highway code as LRN 169 with the routing:

In 1945, Chapter 1269 deleted this routing. Somerset Avenue was later renamed Bellflower Blvd, and the Spring Street referenced was in Long Beach, so this routing ran roughly from Long Beach to Firestone, paralleling what later became I-605.