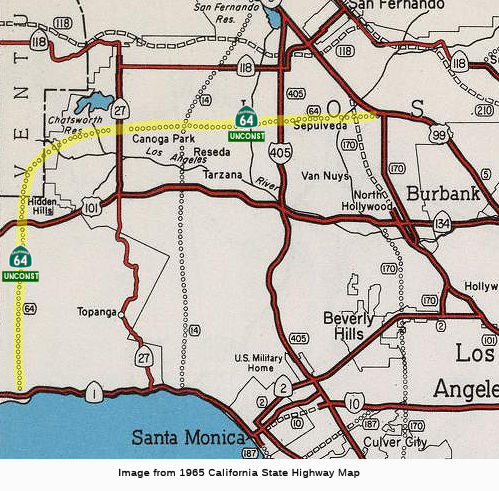 From Route 1 near Malibu Beach to Route 5 south of San Fernando.

With respect to the San Fernando Valley portion of the route, Scott Parker on AARoads noted that there were always two overriding issues with the SF Valley section of Route 64:  one being the billions of dollars of property acquisition required to deploy a freeway there.  But the second was the presence of Van Nuys Airport, which, along with its takeoff/landing zone, occupies about two-thirds of the valley's N-S width.  Even though the projected (but never adopted) route essentially followed Roscoe Blvd., which skirts the north end of the runway (along with the Metrolink/former SP Santa Susana line), any facility would have had to be sunk below grade to avoid interference with airport operations.   The Van Nuys Airport (VNY) is one of the most heavily-used "noncommercial" airfields in the country (no scheduled passenger flights, but a boatload of private jets), with a runway capable of handling commercial jets.  Anything that would disrupt airfield operations would never be tolerated; it took decades to get the Roscoe Blvd. RR overpass through the developmental process; and even then the vertical apex of the bridge had to be moved about a quarter-mile west so as to be out of the runway's path.
(Source: Scott Parker (SParker) on AARoads, "Re: Unbuilt CA 64 on the Malibu Canyon-Whitnall Freeway", 4/18/2020)

In 1963, it was reported that studies were underway on the Malibu-Whitnall Freeway, anticipating adoption after public hearings sometime in 1964.

Before 1964, the route allocated to the unconstructed post-1964 Route 64 routing was LRN 265 (defined in 1959). This routing ran from the junction of I-5 and Route 170 across the valley, and then down across Malibu Canyon. In 1970 Malibu residents, citing ecological and economic concerns, were able to have 7.5 miles of the proposed freeway deleted from the master plan. Due to budget cuts and new environmental restrictions, Whitnall Freeway fell years behind schedule. In parts of the valley homeowners protested that their frozen property in the right-of-way area had stuck them in a permanent limbo as they waited for the government to proceed. Four different attempts were made by valley assemblymen to eliminate the freeway from the master plan. In 1975 plans for the Whitnall Freeway were finally abandoned by Caltrans, and the state held a huge sale, selling the roughly 10 million dollars worth of land it had accumulated in preparation for the freeway's construction. 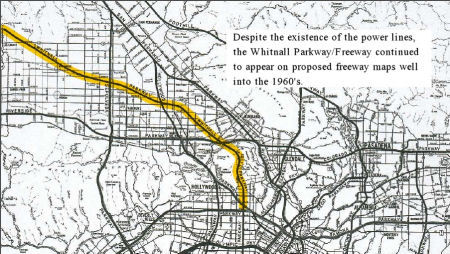 There is a lot of confusion between the proposal for the Whitnall Freeway (which was Route 64), and an earlier, 1927 proposal for a Whitnall Parkway that remained on planning maps until the 1960s. The figure to the right shows the Whitnall Parkway approach; a 2014 LA Times article used words that made this appear to be the freeway proposal from the 1960s (it clearly isn't, as the Route 64 freeway ran across Chase and Malibu Canyon, and the Route 258 freeway ran along Normandie). This approach connects to Route 258, along what is now "Whitnall Highway" in Burbank (which could be the source of the naming of this route). It does not appear substantiated in the route definitions, so this doesn't appear to be a highway at the state level. Gordon Whitnall was involved in city planning around 1916. Whitnall's vision for Los Angeles was both practical and idealistic. He believed that Los Angeles' geographical location made it predestined to be the most important city in the West. He also saw that Los Angeles was not just L.A. proper, but the numerous other satellite cities that surrounded it. These contiguous cities suffered from poor transportation and scattered administrative centers. Quickly promoted to Director of City and County Planning, he envisioned a sprawling metropolis made up of numerous organic civic districts, linked together by a series of arterial highways, and unified by a centrally located administrative and government center downtown near the historic Plaza, where it would be "accessible to all." Whitnall and the planning committee also envisioned four "highways" that would radiate from the valley into arteries leading to the city. These parkway/highways were more modest in design from the modern freeway, and often featured a landscaped center strip separating opposing lanes of traffic. They were Balboa Boulevard, San Fernando Boulevard, Remsen Boulevard (seemingly never built), and most ambitious of all -- Whitnall Highway. Whitnall Highway would stretch diagonally southeast by northwest from Newhall (now part of Santa Clarita) through the San Fernando Valley, and meet up with the entrance of a two-mile tunnel originating off Riverside Drive (which was being expanded into a major artery linking the valley to downtown) that would run under Griffith Park into Hollywood, via Bronson Avenue. Had this tunnel been built it would be the longest highway tunnel in California, and even today would rank as the third longest highway tunnel in the USA. On June 5, 1927, the first section of Whitnall Highway opened to a crowd of 300 at the intersection of Whitnall and Cahuenga Boulevard. Gordon, the guest of honor, christened the highway at the ceremony, which also celebrated the opening of 400 residential tracts owned by the Hugh Evans Corporation. Homeowners in the projected path of the highway began to protest the city's attempt to enforce its right of way through their property. The road was extended, despite further protests, to Oxnard Boulevard in 1931. Yet, after 1934, both plans for the highway and the tunnel abruptly disappeared from the news, though variations continued to appear on maps of proposed transit routes. Over the years, Burbank and North Hollywood tried to figure out what to do with the quirky wide road, and all the free public space below the giant transmission towers which loomed overhead. Portions of the land were used as makeshift playgrounds, parks, and bike trails, but by 1973 the city of Burbank was at a loss. The community seemed to have little interest in pushing for landscaping, or the creation of public parks, and the city had a hard time commercially leasing the land, since nothing permanent could be built under the structures. In 1989 a group of mentally challenged people created a garden on 21 miles under the power lines. In the '90s Burbank finally commissioned the Whitnall Highway Parks North and South.
(Source: LA Times, 10/28/2014; KCETLost Landmarks, 6/28/2013; Jayne Vidheecharoen/Slideshare, 4/18/2011) 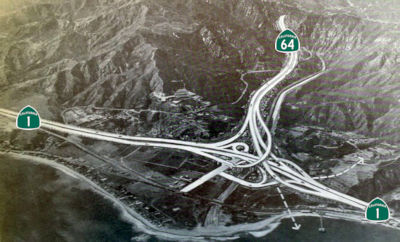 With respect to the Malibu portion of the route, Whitnall was also involved. Whitnall recognized that Los Angeles was comprised of dozens of separate but interconnected communities and proposed a network of four freeways radiating from the center of Los Angeles to the satellite communities, including the San Fernando Valley and Malibu. In 1958 plans for the Whitnall Freeway were released with a route through Decker Canyon. By 1963, the route was moved to Malibu Canyon and was officially designated Route 64. Plans emerged that included filling in the entire canyon and building the freeway on the newly-created land. In February 1964, the California Highway Committee held a public meeting to discuss the plan to transform PCH into a freeway from Malibu Canyon Road to Point Mugu. A map of the route shows the freeway running through the middle of Malibu Park. The figure to the right, from 1963, shows the proposed interchange with the Pacific Coast Freeway (Route 1) in Malibu. A 10-year battle ensued to stop the freeway. It became a major issue in the fight for Malibu cityhood. Campaign material from the unsuccessful 1964 Malibu incorporation effort shows an artist’s rendering of the Malibu Civic Center area entirely engulfed in a multilane freeway and multiple freeway interchanges.
(Source: Malibu Surfside News, 4/22/2015, which also quotes this site; Facebook 11/25/2017) 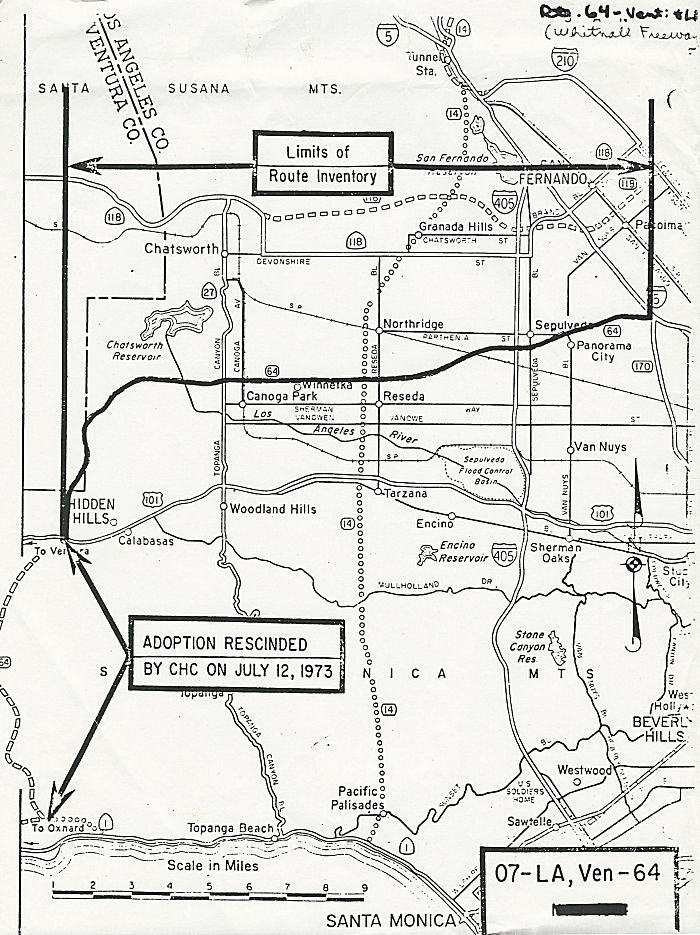 This route isn't signed. It was assigned to what would have been the Malibu Canyon Freeway/Whitnall Freeway (on planning maps in 1965, shown on AAA maps as late as the mid 1980s), which left Route 5 near the Route 170/Route 5 junction, continued across the San Fernando Valley, crossing Van Nuys Blvd near Parthenia, Sepulveda near Chase, ending up about the level of Saticoy or Strathern. Just W of Bell Canyon, it turned to intersect the US 101 Freeway around Hidden Hills. It then crossed the Malibu hills approx. across Malibu Canyon (Las Virgenes) Road. The routing for this was never determined, and there is no assigned traversable route. The limits of the route inventory as of the 1970s was between US 101 and Route 5. The portion between US 101 and Route 1 had its adoption rescinded by the CHC on July 12, 1973. There is a nice discussion on the AARoads Forum that shows it on some maps of the era.

This would have been named the "Malibu Canyon Freeway" for the portion across Malibu Canyon, and the "Whitnall Freeway" for the portion across the San Fernando Valley. Maps based on the 1956 freeway plan show the route dividing at I-405. The Whitnall Freeway continued S (likely as Route 258) to go through Burbank, and then down along Western to Torrance. The remainder of Route 64 then continued to the Route 170/I-5 interchange. This was shown as the "Sunland Freeway".

The Whitnall Freeway was named for Gordon Whitnall, the former Los Angeles city director of planning. Part of the reason for the naming could be that the route ran along Whitnall Highway, an unusual divided street that was laid out in 1927 to be part of a parkway network envisioned to dissect the Valley. In 1913, Gordon Whitnall founded the Los Angeles City Planning Association, and in 1920, he established the Los Angeles City Planning Department. From 1920-1930, he was Director of Planning for Los Angeles, and from 1929-1930 was president of the League of California Cities. From 1932-1935 he was the coordinator of the Committee on Government Simplification for Los Angeles County. In 1941, Gordon and Brysis Whitnall established a planning and government consulting firm in Los Angeles. Gordon Whitnall was an instructor in Planning at the University of Southern California, and a member of the American Society of Planning Officials, the American Institute of Planners, the American Society of Consulting Planners, and the International Fraternity of Lambda Alpha, Los Angeles Chapter.
(Source: Some information from Cornell University Library; Image source: MyBurbank)

The route that would become LRN 64 was first defined in the 1919 Third Bond Act as running from Mecca to Blythe. Mecca is S of Indio, near where present-day Route 86 (former US 99) and Route 111 diverge around the Salton Sea. The route ran across Box Canyon Road to join the current I-10 (former US 60/US 70) routing to Blythe. Note that this route had no connection to the remainder of the state highway system, nor to the state line, at the time (i.e., it didn't connect to LRN 26 in Indio/Mecca, nor did it extend to Arizona).

In 1931, Chapter 82 extended the route from Blythe to California-Arizona state line at the Colorado River and [LRN 64] to [LRN 26] near Indio. It was felt that, as a link in the transcontinental routing, the state route should extend from the state line to a conneciton with some other state route. It was noted in 1931 that approval of the requests of Arizona and California to place this route on the federal aid system had been granted by the Secretary of Agriculture. The bypass of Box Canyon opened in 1935.

This definition was rapidly changed by Chapter 274 to make the last segment "A point near Shaver's Summit on that portion..."