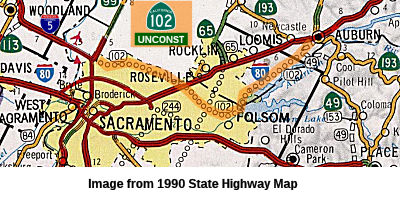 From Route 5 near Elkhorn to Route 80 near Auburn.

Around 2000, planning for Route 102 had realigned it from the Auburn-Folsom-Rio Linda-Elkhorn routing of Route 102 (which would've crossed I-80 twice and parallelled Folsom Lake and Elkhorn Boulevard/Greenback Lane) in 1994 to a direct route from Auburn to Elkhorn/Natomas crossing through undeveloped areas in Sacramento and Placer County.

This was a "dotted line on the map" route extending east from near the I-5/Route 99 interchange between Natomas and the airport, and paralleling Elkhorn Road and Greenback Way out to the Orangevale area, then turning north via Granite Bay, terminating at I-80 near Auburn. It was never more than a proposed corridor concept, and later planning shifted it to a more northeastern trajectory from its west terminus, skirting Lincoln to the south and crossing Route 49 north of Auburn before turning east to intersect I-80 near Applegate, where Route 102 would terminate. It was explicitly intended to be a traffic reliever for I-80 in the Sacramento-Auburn corridor; it would have likely also prompted the decommissioning of the Route 193 segment from Lincoln to Newcastle.
(Source: Sparker @ AAroads, 7/23/2016)

In 2002, the Traversable Highways Report noted that a Feasibility Study has been completed in 1991 but further corridor studies are needed. Budgetary constraints have stalled these studies. Placer County is pursuing Placer Parkway, an access controlled facility to be built to freeway standards between Route 65 near Roseville and Route 99 near Lincoln north of Sacramento. It would be a freeway with only a few local interchanges. The intent is to serve as a reliever route for I-80. This proposal came out of the routing study for Route 102 which was conducted in the 1980s and follows much of the recommended alignment that came out of that study. The project is led by the Placer County Transportation Planning Agency. The City of Rocklin is nearly finished building an interchange on Route 65 (Whitney Ranch Parkway) that is intended to serve as the western terminus of Placer Parkway and Placer County is planning to build the first piece of the parkway which would run about 1-2 miles west from this interchange. Placer County has a transportation sales tax on the November 2016 ballot which, if it passes, could also help pay for the remainder of the project. There is the possibility that it could be built as a toll road. The Route 65 Whitney Ranch interchange will be the Eastern end of the Placer Parkway. It will be an L-9 parclo interchange. There are no plans to extend Placer Parkway east of Route 65 or west of Route 99. The western terminus at Route 99 would have flyover connections, and not be a trumpet interchange. It would tie in between Sankey and Riego Roads. The proposal is to limit the number of interchanges on the Placer Parkway and have a wide right of way to minimize growth and sprawl. The project is being developed locally and it's unclear if the state would adopt it after completion.
(Source: Joe Rouse at AAroads, 7/30/2016)

In April 1958, it appears that the designation I-102 was proposed for the route that is now I-210. This was part of the first attempt to assign 3-digit interstates n California. The number was rejected by AASHTO.

In 1933, Chapter 767 added the route from "Napa-Calistoga Road near Rutherford to Napa-Winters Road via Sage Canyon" to the highway system. In 1935, this was codified as LRN 102 in the highway code with the following definition: