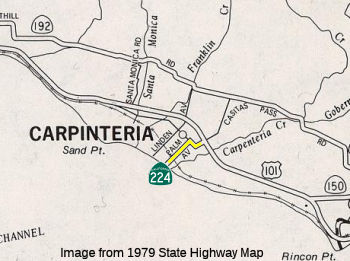 In 1963, this route was defined as “Route 101 near Carpinteria to the Carpinteria Beach State Park.”

In 1992, Chapter 1243 clarified the definition: “Route 101 near in Carpinteria to Carpinteria State Beach Park”.

In 1996, Chapter 1154 deleted the route. According to the CalTrans photolog, this routing had not been relinquished as of 2001.

In 1947 (1st Ex Sess), Chapter 11 was defined as “a point on [LRN 2] near the intersection of Lombard Street and Van Ness Avenue to the San Francisco-Oakland Bay Bridge approach in San Francisco”.

This was what was Route 480 between 1964 and 1968. Portions of this were constructed to freeway standards, but were destroyed by the 1989 Loma Priata Earthquake.