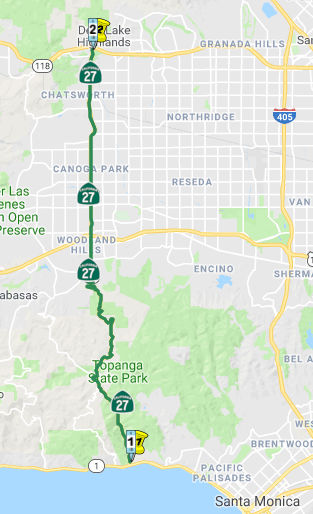 From Route 1 near Topanga Beach to Route 118.

In 1963, Route 27 was defined as the route from “Route 1 near Topanga Beach north of the intersection of Sunset Boulevard and Route 1 to Route 118 at or near Chatsworth.”

Topanga Canyon originally terminated at Santa Susana Pass Road (in fact, it was known as Santa Susana Road N of Devonshire). The extension N of Devonshire St. from just S of the SP Railroad "S" curve to the new freeway was completed in 1966; this extension climbs an 8% grade to an elevation of 1,232'. Topanga Canyon Blvd was rerouted sometime in the 1960s between Plummer and Marilla Street. The original routing was along what is now Topanga Canyon Place, and went first W of the current route, crossed the current route, and then looped E and back to the current route shortly N of Marilla Street. This was to avoid a hill that was later taken down. However, the Plummer to Topanga intersection was constructed in the 1980s or 1990s.

There also appears to be rerouting between Roscoe and Nordhoff, as well as slightly around Oxnard. The original terminus was Devonshire Street, where it met Route 118 and continued N and then W as Santa Susana Ave.

There is an "Old Topanga Canyon Road" that splits off Topanga Canyon Road in the community of Topanga, and continues on a more westerly and winding route, meeting Mullholland Drive near Valley Circle. This does not appear to have ever been a part of Route 27 or LRN 156.

In April 2013, it was reported that the Los Angeles County Board of Supervisors has asked the state to designate the portion from Route 1 to the Ventura County line as a state scenic highway (essentially, the entire route). 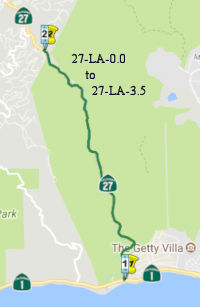 In June 2017, it was reported that Topanga Canyon Blvd had received a state scenic highway designation: "Topanga Canyon State Scenic Highway, a 2.5 mile (although another article says 3.5 mi) segment of Route 27, runs through the county and city of Los Angeles in the Santa Monica Mountains National Recreation Area near the Pacific coast." The LA Times clarified that the designation is from Mile 1 to Mile 3.5 (near Old Topanga Blvd), putting it within the SHC 263.3 designation. The new scenic highway runs parallel to Topanga Creek, with views of massive rock formations, valleys, mountains, and a diversity of plants and animals. California’s scenic state highway program was implemented in 1963 in order to “add to the pleasure of state residents,” and “encourage the growth of recreation and tourist industries.” Designated scenic highways, along with adjacent scenic corridors, require special conservation treatment. Scenic corridors consist of land that can be seen from the scenic highway and is next to the highway, even if it is outside the highway right-of-way. The legislation lets the state assign responsibility for the regulation of land use and development along scenic highways to the appropriate state, local and county agencies. “The city or county must also adopt ordinances, zoning and/or planning policies to preserve the scenic quality of the corridor or document such regulations that already exist in various portions of local codes,” Caltrans specifies. According to Westways magazine, this was the first LA County road to receive the state scenic highway designation in 45 years. It was reported as the culmination of a five-year effort by Topanga Chamber of Commerce members Joseph Rosendo and Roger Pugliese, along with the Topanga Association for a Scenic Community working with county and city officials to develop a scenic corridor protection program. The new Topanga Canyon State Scenic Highway travels through a portion of Topanga State Park, which features 36 miles of trails through open grassland and live oaks, and spectacular views of the Pacific Ocean,” it said. “The park is one of the world’s largest wildlands within the boundaries of a major city.”
(Source: OneTopanga, 6/17/2017; LATimes, June 2017; Caltrans; Malibu Times, 10/20/2017)

This route is Topanga Canyon Blvd.. Topanga is an Indian name referring to "above place" or even sky or heaven. It may refer to Indian village site located above Topanga Creek.

The route that was to become LRN 27 was first defined in the 1916 Second Bond Issue as part of the "extension of the San Bernardino county state highway lateral to the Arizona State Line near the town of Yuma, Arizona, via the cities of Brawley and El Centro in Imperial County by the most direct and practical route...". LRN 26 took the portion from the San Bernardino County lateral (LRN 9) down through Brawley and El Centro. LRN 27 then continued E-ly from El Centro to Yuma Arizona. (LRN 26 continued S to Calexico as part of LRN 26's 1931 extension)

In 1935, LRN 27 was codified into the highway code as running from El Centro to Yuma, and was all primary state highway. The definition remained unchanged until 1963 and the great renumbing. This route was signed as US 80, and is present-day I-8.