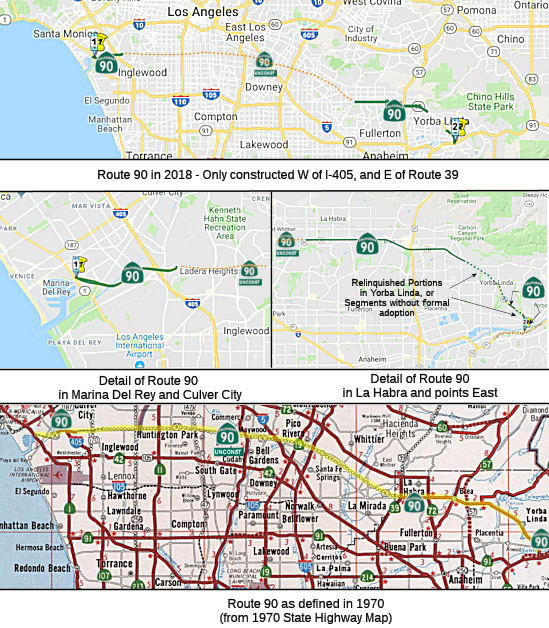 From Route 1 northwest of the Los Angeles International Airport to Route 91 in Santa Ana Canyon passing near La Habra, except for the portion within the city limits of Yorba Linda.

In 1963, this route was defined as "Route 1 northwest of the Los Angeles International Airport to Route 605."

In 1965, Chapter 1330 transferred the portion from Route 605 to the junction of Routes 39 and the then Route 42 near La Habra were transferred from Route 42 (and thus, Route 90 gained the Yorba Linda freeway). This made the definition: "Route 90 is from Route 1 northwest of the Los Angeles International Airport to the junction of Routes 39 and 42 near La Habra." Chapter 1372 also amended the route that year, but appeared to make no other changes.

Construction on the route begin in 1966 between Centinela Ave and I-405. The remainder of the route to the W, between Centinela and Route 1 was pending completion of the Pacific Coast Freeway. Eventually, that freeway was abandoned and the western segment was constructed as a limited-access expressway. The eastern portion (Slauson Freeway) still had no route determination, and has not been constructed to date.

In 1968, Chapter 282 transferred more from Route 42 ("Route 39/Route 42 to Route 91"), making the definition "Route 1 northwest of the Los Angeles International Airport to Route 91 in Santa Ana Canyon passing near La Habra." As a personal footnote here: I remember distinctly driving with my brother on Route 90, right after it opened, sometime in 1968 or 1969.

This route was unsigned in 1963. It did, however, have a legislative definition:

In 1960, it was reported in CHPW that a section 3.9 miles long in the Culver City-West Los Angeles area was adopted on December 16, 1959 as a freeway by the California Highway Commission. The estimate of cost for ultimate development to eight lanes is $30,800,000 for right-of-way acquisition and construction. The Marina Freeway will provide traffic service for the motorists using recreational facilities in the Santa Monica Bay area, and it could eventually serve as a part of the East-West Slauson Freeway which was included in Senate Bill 480.

In 1963, it was noted that the easterly continuation of the Marina Freeway was under study, and would be called the Slauson Freeway.

The portion from Inglewood to where Route 90 meets Route 39 is unsigned; small sections are freeway; orginally planned as freeway from Route 1 to Route 605 as the Marina-Slauson Freeway, with the remainder of the route (along Route 42) to have been the Yorba Linda Freeway. The traversable local routing is Slauson Avenue, which does not have adequate construction. The route concept report recommends deletion of Route 90 from the state highway system from unconstructed Route 258 to the Orange County line.

There is a plan, on the western end, to extend the Marina Freeway west to Mindanao by building a full interchange and grade-separation at Culver.

According to the Daily Breeze in March 2006, Los Angeles County Public Works (see http://www.sr90admiraltyway.org/) has a plan to relieve clogged intersections in and around Marina del Rey by extending the Marina (Route 90) Freeway past Lincoln Boulevard, allowing motorists to bypass the busy thoroughfare on their way to the water (not all of this would be Caltrans, unless the legislative definition is changed). Note that portions of this would not be state highway; specifically, the portion W of Lincoln Blvd. This connector would provide a direct link to Admiralty Way, a four-lane road lined with boat storage, retailers and park space that circles the marina. An alternative being considered would widen Admiralty Way to handle heavier volumes of traffic from new and future residential developments. These projects are being planned at the county level, and would result in the addition of an exit at Lincoln Blvd. A draft environmental impact report is not expected to be finished until 2007, and construction isn't anticipated until at least 2011. The department is studying three options for a freeway connector, all of which would require the freeway to be realigned between Mindanao Way and Lincoln Boulevard:

In February 2016, it was reported that the city of La Mirada has places to improve the intersection of Imperial Highway (Route 90) and La Mirada Boulevard-Telegraph Road. Specifically, city officials have a plan to add an extra lane on the west bound (north side) of Imperial Highway to try and relieve some of the problem. About 1,900 cars use Imperial Highway going west in the morning and evening, according to Los Angeles Public Works Department traffic counts. It only has two through lanes and some right-turn lanes. City officials have long sought to improve the intersection, but when two deals to redevelop the then-vacant Crossroads Center fell through in the 2000s, plans to realign Telegraph Road were put on hold. The first step in the plan is to remove two median islands at the Telegraph and Imperial intersection. Cost of this first project is estimated at $1 million, $450,000 of which will come from a Los Angeles County grant. The second step is to acquire land in front of Walgreens and Banc of California and create a new lane from La Mirada Boulevard to Telegraph, on Imperial. That will allow for the addition of a new lane on westbound Imperial.
(Source: Whittier Daily News, 2/29/2016)

On the eastern end, there is currently a plan to extend the freeway portion of this route over Orangethorpe Avenue/Esperanza Road (~ ORA 12.312) and the subsequent rail grade, due to increasing rail traffic. Also in the works are plans to expand this road using the old Pacific Electric right of way through Yorba Linda (construction has started in Yorba Linda). Brea also has expansion plans, and Placentia needs only to restripe the road (all .3 miles of it) when the expansion on either side is finished. Eventually, Imperial Highway will be 3 lanes between Route 39 and Santa Ana Canyon Road. However, as of 2004, it appears that funding problems have waylayed the Imperial Highway bridge over the BNSF grade that it crosses near Anaheim and unincorporated Yorba Linda.

As of August 2002, construction in Yorba Linda is complete. Dennis Carr reports that they even moved the remaining rail car down near Polly's Pies, at the crossing of Imperial Hwy and Lemon St, which as he understands it was the location of the old PE rail station in Yorba Linda. In June 2002, the CTC had on its agenda the relinquishment of 12-Ora-90-KP 12.87/16.25 and KP 16.25/18.91 in the City of Yorba Linda. This is likely the original highway bypassed by the new construction. 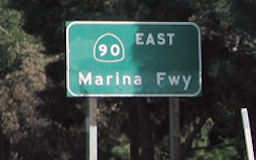 The segment of this freeway from Route 1 to Route 91 (although it is not all constructed to freeway standards) is named the "Marina Freeway". It was named by Senate Concurrent Resolution 56, Chapter 25 in 1976. The Marina Freeway opened in 1968.
(Image source: AAroads)

Between 1971 and 1976, the entire route (adopted and unadopted portions) was named the "Richard M Nixon Freeway". Richard Nixon was the 37th President of the United States. Born in California in 1913, Nixon had a brilliant record at Whittier College and Duke University Law School before beginning the practice of law. He served as both a congressman and a senator from California, and was Vice President under President Eisenhower. He was elected president in 1968, and served until he resigned in 1974. For more details, consult his official biography or visit the Richard M Nixon Library. A snippit from the Los Angeles times shows the resolution was past in the August-September 1971 timeframe, and was authored by Assemblyman John Briggs (R-Fullerton). Briggs sought the naming because the potential freeway would run through Whitter (where Nixon grew up) and end in Yorba Linda (where he was born).
(Image source: LA Times, Wikipedia)

This was originally to have been named the "Marina-Slauson Freeway", and would have run to I-605.

The portion of this route constructed to freeway standards in Orange County is named the "Yorba Linda Freeway", and opened in 1970. It was named by location.

The portion of the former freeway in Yorba Linda has been renamed the Richard Nixon Parkway by the Yorba Linda City Council. They recently finished an upgrade project, funded by the City of Yorba Linda, which turned the Super 2 into a Super 4 (except for a 4/10 of a mile stretch still controlled by the state). The city council, having been given control of that portion of SR-90, decided that they no longer wanted it to be called a freeway, so they've renamed it and have removed all references to the term "freeway" from local signs, including removing the "Freeway Entrance" signs from its one controlled access intersection, Kellogg Dr.
(Image source: GKids Films on Twitter, Wikipedia)