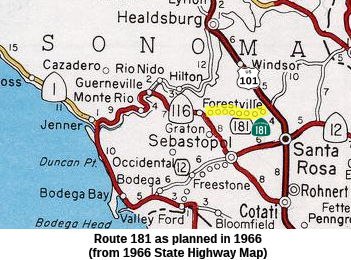 River Road, as now exists between Fulton (US 101 and Mark West Springs Road) and Gurneville (Route 116) was built on top of an old SP railroad right-of-way by Sonoma County in the late 1950's. This alignment basically bypassed several secondary county roads such as Laughlin Road, Woolsey Road, Trenton Road, and the what was then called "River Road". The segment from US-101 to Mirabel Road was the proposed Route 181. At the time the "new" River Road was constructed, it was proposed that Route 116 be rerouted away from its Pocket Canyon Road alignment between Forestville and Guerneville, and routed down Mirabel Road to River Road, and then West to Guerneville.
(Source: Email from Nick Karels of Santa Rosa)

The routing for Route 181 has not been determined; although there is a traversable local route: Mirable Road and River Road, with no plans for improvement to state standards. 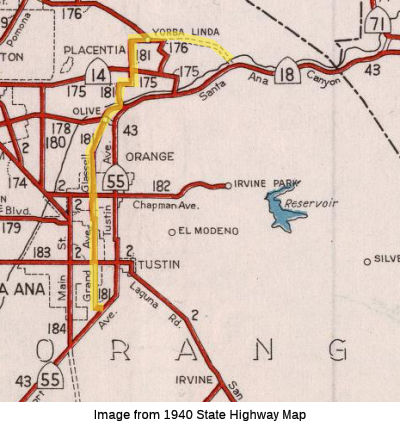 In 1933, the route from "[LRN 43] to La Habra-Santa Ana Canyon Road near Yorba Linda via Grand Avenue and Glassell Avenue" was defined as part of the state highway system. In 1935, it was added to the highway code as LRN 181, with the routing:

Looking at the map, this would be the route starting at Route 55 (Harbor) from Dyer to Grand, up Grand (turning into Glassell) to Orange-Olive Ave turning onto Santa Ana Canyon. It then ran to Jefferson, and up Jefferson to Walnut, across Walnut to Richfield, and then up Richfield to Yorba Linda Blvd. It then ran along Yorba Linda to Imperial Highway, Route 90/LRN 176 (nee Route 42). There may have plans to eventually extend it back to Route 91 along Yorba Linda.