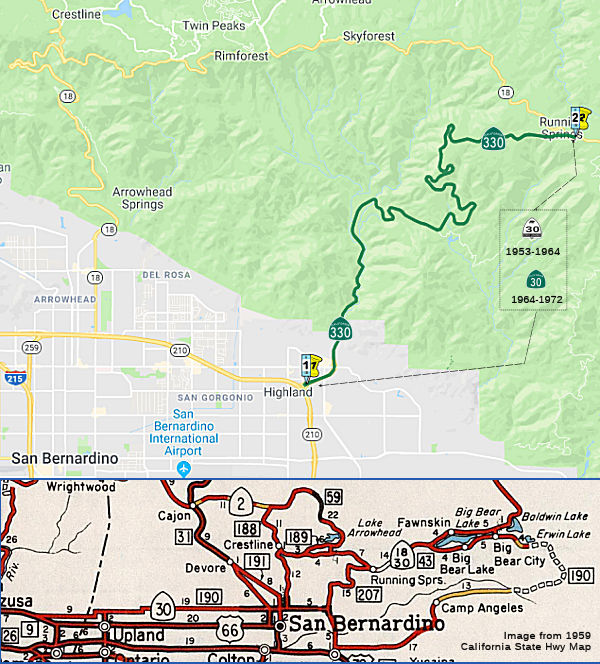 From Route 210 near Highland northeasterly to Route 18.

In 1964, Route 30 was defined as the route from "Route 210 near San Dimas via the vicinity of Highland northeasterly to Route 18" (at Running Springs, not Big Bear City)

This was part of LRN 207, defined in 1937.It was originally part of Signed Route 30, and runs along City Creek Road.

In 1937, City Creek Road was added as LRN 207, due to the existing roadway being inadequate to handle modern traffic.  LRN 207 was defined as "LRN 190 near Highland northeasterly to LRN 43 (Route 18); also from a point on said LRN 43 near where it crosses Deep Creek, thence northeasterly to and connecting Forest Service North Side Road in Green Valley." In 1941, the Green Valley segment was removed from the legislative definition. The route was paved and graded during the 1940s. The modernized City Creek Road fully opened to traffic by August 19, 1951.  The modernized alignment was elongated from the 1891 variant to lessen the gradient of the climb into the San Bernardino Mountains.
(Source: Gribblenation Blog (Tom Fearer), "California State Route 330 and City Creek Road", June 2022)

In December 2010, major storms resulted in the washout of a section of Route 330 at the Postmile 35, just about 6 miles north of Highland Avenue. Repairs were estimated to be finished in late 2011 or early 2012. Work will be divvied up into three phases across the approximately 15-mile highway. The $6 million first phase to fix several smaller washouts and prepare the roadway will allow larger equipment to reach the worst-hit area.

In March 2011, it was reported that the road was reopened for commuter traffic only. Drivers will be able to drive downbound between Live Oak Road and Highland Ave in the morning between 6am and 8am. In the afternoon and evening, they will be able to drive upbound from Highland to Live Oak between 4 and 6. Traffic will only be one direction during commute times and motorists will need to use the proper lane. CHP says that they may close the road at anytime if there’s bad weather or reckless driving that endangers the safety of the construction workers.

In June 2011, it was reported that Caltrans now is targeting the full reopening for the July 4th holiday weekend.

Route 330 in the County of San Bernardino is named the "Steve Faris Memorial Highway" This route was named in memory of Battalion Chief Steve Faris of the California Department of Forestry and Fire Protection. In 1998, Battalion Chief Faris helped establish in the Inland Empire the Mountain Rim Fire Safe Council, which was the first of more than 14 councils that are now active in the Counties of San Bernardino and Riverside. He was instrumental in bringing together the fire safe councils to form the Inland Empire Fire Safe Alliance. In 2002, Battalion Chief Faris was intimately involved in the establishment of the Mountain Area Safety Taskforce (MAST), which brought local, state, and federal agencies together to address the critical fire situation presented by the bark beetle-drought tree mortality issues. The consolidated efforts of MAST and fire safe councils contributed significantly to the safe evacuation of more than 60,000 people during the Old Fire of 2003. Battalion Chief Faris was a friendly, giving, and passionate person who included everyone and found a way to work with anyone interested in his efforts to save lives and establish defensible space for properties in the mountains. Battalion Chief Faris died in an automobile accident in September 2006. Named by Senate Concurrent Resolution (SCR) 12, Resolution Chapter 72, on 7/14/2009.
(Image source: Joan Moseley's Mountain Top Echoes; KBHR Big Bear News)

A stub of this route, for about 1 mile going up City Creek, is built to freeway standards.