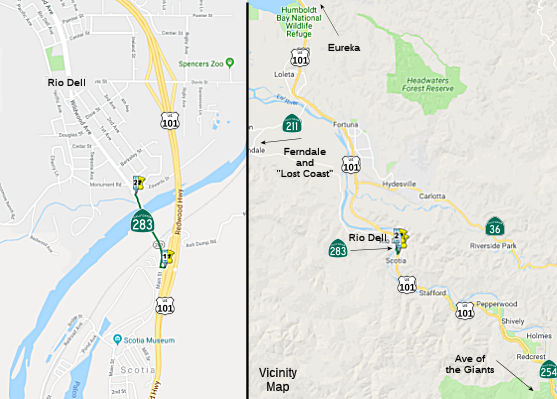 From Route 101 south of Rio Dell to the north end of the Eel River Bridge and Overhead in Rio Dell.

In 1970, Chapter 1473 defined Route 283 as “Route 101 south of Rio Dell to the north end of the Eel River Bridge and Overhead in Rio Dell.” This is the shortest route in the state system in terms of defined length, but in terms of constructed length, Route 77 is shorter by 10 feet.

This routing is not signed.

In July 2018, there was an interesting article on the impact of a project on the Rio Dell Bridge. Rio Dell' is a small city (population 3,400) on the banks of the Eel River that was once the seamy playground for the company-town employees of neighboring Scotia, seeing booming business during the Prohibition era when it was an unincorporated area known as "Wildwood." Incorporation in 1965 could have stabilized the town, but the bypass of US 101 in 1973 crippled tourism for a time, and the decline of the logging industry dealt an additional blow to the town's economy. Rio Dell once surged on the revenue of 2,500 timber jobs in nearby mills. The Scotia mill, the last remaining, now employs around 250, according to the local chamber of commerce. Since then, there has been a long, slow climb in stability, with a dedicated group of civic boosters advocating for small business growth, renewed investment in public beautification projects and an embrace of the legal cannabis industry all contributing to Rio Dell's renaissance. Between 2016 and 2017, the town's quarterly sales tax returns rose by almost 57 percent. New businesses — a café, two massage parlors and a boutique — took root. In March 2018, an unexpected setback occurred when Caltrans closed the bridge linking Rio Dell to Scotia to repaint it. At the cusp of tourist season, traffic slowed to a trickle. The closure is anticipated to last through summer 2018 and longtime business owners say it will mean the death of their storefronts. The Eagle Prairie Bridge has a unique distinction as the second-shortest state highway in California (after Route 275 in Sacramento). Originally part of U.S. Highway 101, the bridge was re-designated as a transfer from the highway in 1970 and is under the stewardship of Caltrans. When Caltrans last repainted the bridge in 2001, it kept it open to one-way traffic. But according to spokesperson Myles Cochrane, the agency made a different move this year, largely for fiscal reasons. The full closure of the bridge means a six-month project; one-way traffic control would stretch the painting job to two years. Full closure is also safer for workers, Cochrane says. A lighted path has been established for pedestrians and bicyclists.
(Source: North Coast Journal, 7/5/2018)

In August 2018, it was reported that the Eagle Prairie Bridge, spanning the Eel River between Rio Dell and Scotia, reopened to vehicle traffic in early August 2018, just in time for the fun and festivities associated with the annual Wildwood Days. When the bridge closed for painting in March, the estimated closure time was six months, with a planned reopening in early October 2018. However, the contractor brought in additional workers and that sped up the entire operation. This is a permanent re-opening of the Eagle Prairie Bridge and no further closure is planned. There will be controlled traffic on the bridge briefly for center line and traffic line striping, and installation of reflectors on the striping. The construction detours signs will also be removed shortly.
(Source: Time Standard, 8/4/2018)

Bridge 04-0015 over the Rio Dell-Eel River in Humboldt County (HUM 000.12) is named the "Albert Stanwood Murphy Memorial Bridge". It was built in 1941, and was named by Assembly Concurrent Resolution 23, Chapter 91, in 1977. Albert Stanwood Murphy (b. 1892) was the president of Pacific Lumber and assisted the "Save the Redwoods League" in setting aside redwood park land. While Murphy was at Pacific Lumber (PL), PL was a different kind of logging company. Selective cutting, a policy he first set forth, meant PL cut a maximum of 70 percent of the mature trees in a stand. PLs practice was such a drastic change from the industry standard of leaving hillsides completely barren that, it was often difficult for the untrained observer to realize that the company’s selectively cut acreage had even been touched. Sustainable yield, another Albert Murphy policy, also represented a striking difference between how PL and the rest of the industry did business. While many companies would routinely cut all of their timber and promptly go out of business, PLs annual cut would always be limited and never exceed its timberlands new growth. This way, year after year PLs gross amount of board feet would never decline. PL could continue this mode of production indefinitely. Alas, after Murphy was gone and the company sold to Maxxim, these policies went by the wayside. With respect to the Redwoods Park, Murphy committed to protecting the trees in Dyerville and Bull Creek Flats until the Save the Redwoods League could purchase the land.
(Image source: North Coast Journal; Additional information: The Last Stand) 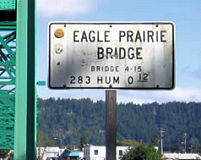 This bridge was later renamed the "Eagle Prairie Bridge" by Senate Concurrent Resolution 90, Chapter 79, in 1990. It was named to commemorate the 50th anniversary of its construction and the 25th anniversary of the incorporation of the city of Rio Dell, formerly known as Eagle Prairie.
(Image source: AARoads)

This route is signed as follows: