The definition of this route remains unchanged from 1963.

Before the 1964 renumbering, this route was LRN 278 (defined in 1959). The routing was determined, but the highway was unconstructed.

Unconstructed from Route 15 to Route 67. There are no current plans to construct a state highway in this segment. There is no traversable highway identified. 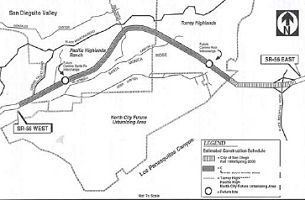 Constructed a fully access controlled freeway from I-5 to I-15 (~ SD 0.000 to SD 9.471). This project was completed in June 2004. The new constructed portion is a joy to drive, as its lightly traveled, and still very much in a semi-rural state, save for a few retail developments and some homes popping up in the distance. It appears there is sufficient right of way for up to 10 lanes in the future. In July 2006, the CTC considered modification of the project funding related to the landscaping portion is currently under construction in 2006. TCRP funds, the amount of $3,430,000, were set aside for a future traffic operations project. However, costs to R/W have increased due to the final condemnation case. The traffic operations project will be funded in a future STIP cycle.

In August 2015, it was reported that the city of San Diego and Caltrans are working together to find solutions for commuters who struggle daily with the heavily congested Route 56.  Specifically, the City of San Diego has asked Caltrans to look into the possibility of doing smaller projects which could be done sooner and would help reduce some of the congestion on Route 56. They could pay for it using city funds. In March, Council President Sherri Lightner led a City Council vote to initiate a feasibility study process, including various technical studies and reports, to expand the busy thoroughfare from four to six lanes. In her endorsement of the study, she stated that the 2040 target date for the highway expansion is too far off and improvements need to happen sooner rather than later. It is anticipated that all of the SR-56 improvements can be done within the existing right of way. The widening of Route 56 could occur before the construction of the Route 56 and I-5 connector project.
(Source: Del Mar Times, 8/18/2015)

However, there is not a connector from the NB I-5 to WB Route 56, and from SB I-5 to EB Route 56 (~ SD 0.035). According to an article in the San Diego Union-Tribune, motorists will be required to exit the freeway and use surface streets to make those transitions. This is because "Caltrans typically requires that 1,500 vehicles an hour pass through an interchange at peak travel times to necessitate a direct connector. Until recently, Caltrans contended that neither connection met that threshold. Moreover, the connectors would cost nearly $140 million. Caltrans spokesman Tom Nipper said spending $140 million to benefit 1,500 vehicles an hour didn't seem like a wise investment, so Caltrans and the San Diego Association of Governments decided to spend the region's limited transportation dollars on more pressing projects." Later meetings resulting in Caltrans updating its traffic projections and agreeing that the ramp connecting westbound 56 to northbound I-5 needs to be built before 2020. However, it still may take as long as 10 years to perform the necessary environmental studies, and design and build that segment. As for the ramp from SB I-5 to EB Route 56, the consensus was to put off construction of that ramp and concentrate on the west-to-north connector.

In October 2017, the CTC approved for future consideration of funding the following project for which a Final Environmental Impact Report (FEIR) has been completed: I-5 and Route 56 in San Diego County. Construct roadway and interchange improvements on I-5 and Route 56 in and near the city of San Diego. (11-SD-5, PM R32.7/R34.8, 11-SD-56, PM 0.0/2.5) (EA 17790). This project proposes to provide direct connections between I-5 and Route 56 in San Diego County. This project is not fully funded and is included the San Diego Association of Governments 2016 Regional Transportation Improvement Program for $16.9 million, which includes local funding for preliminary engineering. The project will be constructed in multiple stages upon further programming. Construction is estimated to begin in 2020.

According to Carl Rogers, the southbound connector from I-15 is not yet complete (~ SD 9.6). There are pillars constructed for a distribution ramp though. As an interim option, there is a frontage road funneling SB I-5 traffic to Route 56. The eastbound Route 56 connector to southbound I-15 is still under construction; in fact, a sharp 90-degree at-grade turn is presently in place.

The segment from Route 5 to Route 15 (~ SD 0.035 to SD 9.471) is officially named the "Ted Williams Parkway". Ted Williams achieved national recognition for his outstanding career in professional baseball. He was born in San Diego in 1910, and began his professional baseball career in 1936 at the age of 17, when he began playing for the San Diego Padres of the Pacific Coast League. He played for the Boston Red Sox for a total of 19 seasons, and was named most valuable player for the 1946 and 1949 seasons. Named by Assembly Concurrent Resolution No. 21, Chapter 74 in 1993.
(Image sources: Flikr; History Channel)

The route that would become LRN 56 (the coast route, part of today's Route 1) was first defined in the 1919 Third Bond Act as running from Carmel to San Simeon. In 1921, Chapter 837 extended the route by declaring "the county road extending from San Simeon SE-ly to the town of Cambria is hereby...declared to be a state highway".

In 1931, Chapter 82 extended it further by adding the segment from Cambria to San Luis Obispo to the route. As of 1931, the Coast Route (LRN 56) terminated state jurisdiction near Cambria. A county highway then connected it to Route 2 at San Luis Obispo. It was included in the highway system to provide a through drive and extending to a connection with an existing state highway. The more interesting aspect of the rationale was that it was also implementing a policy to increase mileage in the southern portion of the state.

In 1933, it received a number of additional extensions: (a) a segment from [LRN 2] near Las Cruces via Lompoc and Guadalupe to [LRN 2] near Pismo; (b) [LRN 56] near Carmel to Santa Cruz; (c) Santa Cruz to San Francisco via Coast; (d) State Highway near the Southerly end of the Marin Peninsula to the Marin-Sonoma County Line via the Coast Route; (e) Russian River near Jenner to Westport; and (f) Ferndale to [LRN 1] near Fernbridge. In 1935, all of these extensions were captured in the highway code as follows:

In 1943, Chapter 661 permitted the commission and the department "to abandon and relocate any portion or portions of [LRN 56] as now established and laid out between the intersection of [LRN 56] and [LRN 55] south of San Francisco and the town of Farallon City in San Mateo County and to take any and all action necessary for such abandonment and relocation. Such abandonment may be effected prior to relocation and pending relocation the commission and the department may adopt and maintain any traversable road around the portion or portions so abandoned." This was done because of the excessive number of rock and mudslides on portions of LRN 56/Route 1 which made maintenance excessive and endangered the public.

In 1951, Chapter 1588 filled gaps north of San Francisco and added a branch near Leggett Valley. This combined the third through fifth segments into:

State highway near southerly end of Marin Peninsula to [LRN 1] near Fernbridge via the coast route through Jenner, Westport, and Ferndale; provided however that Section 600 of this code shall be applicable to those portions of said road added to the state highway system by this section, the same as if said portions had been added by the Collier-Burns Act of 1947, and the Department of Public Works shall not be required to maintain any such portion or portions of said route until the same have been laid out and constructed as a state highway

In 1955, Chapter 1488 removed the language related to Section 600. It also reworded the definition of the last segment to be "State highway near southerly end of Marin Peninsula to [LRN 1] near Fernbridge via the coast route through Jenner, Westport, and Ferndale, including lateral connection with [LRN 1] near Leggett Valley "

There were no further changes before the 1963 renumbering. This route was all signed as Route 1. The final definition was: