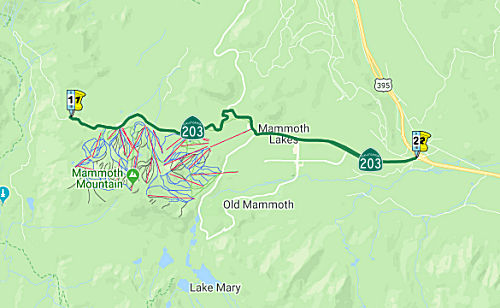 From the Mono county line near Minaret Summit to Route 395.

In 1967, Chapter 1323 extended the route from the Mono County Line to Mammoth Lakes: "the Mono county line near Minaret Summit Mammoth Lakes to Route 395."

Note that the road actually does not end at Minaret Summit. Starting at US 395, the road is open all year round to the town of Mammoth Lakes at about 7,800 feet and to Mammoth Mountain Ski Area Main Lodge and Mammoth Mountain Inn at about 8,950 elevation. In the winter, the road is not plowed past that point. It opens to the public around mid June depending on the snow. It continues up to Minaret Summit, and then it goes down into The San Joaquin River Middle Fork valley (although past Minaret Summit, the road is not longer part of the state highway system, although it may be maintained by the park service). While in the valley there is a turn off for Devil’s Postpile. This turn off goes right to the river. During most of the summer there is a shuttle bus from Mammoth Mountain Inn to the San Joaquin River Middle Fork valley, Devil’s Postpile, and the 2 stables in the valley. From about 7:00 am to 7:00 pm most car traffic is not allowed and you have to take the shuttle bus. There is not enough parking in the valley. The road from the Inn to the summit is great. From the summit the road goes diagonally down a slope. This part of the road is narrow and sometimes downhill vehicles have to back up hill to allow uphill vehicles to pass. Usually if the vehicles are not too wide and drivers plan ahead only slowing down is needed. When the road gets to the valley it makes almost a complete U turn. It then goes down the valley a few miles. This part of the road is again wide enough for 2 way traffic. There are multiple bus stops in the valley. More information is available at www.nps.com for Devil’s Postpile. Fishing and camping are also possible in the valley. The John Muir Trail and Pacific Crest Trail are also down there.

There was once a proposal to extend Route 203/LRN 112 across the Sierras. At the time, in the throes of the Cold War and on the heels of World War II, where Eisenhower saw how the German war machine benefitted from the autobahns, the nation’s defense was one of the principal reasons forwarded for building the road. As Madera County Supervisor Carl W. McCollister said: “The road was necessary to give people in the San Joaquin Valley their rightful highway outlet to the east should coastal cities become targets of nuclear attack.” Ultimately, however, opponents of the road argued that the road was impractical and made zero business sense. Genny Smith, ringleader, organizer, activist, scribe who fought the road over nearly three decades, commented, “it was businessmen like Bob [Schotz] who made the difference. This road was a business proposition from the get-go and a poor one at that. He and his colleagues knew it and were willing to stand up and say so.” It was finally stopped during the Reagan Administration (as in, when he was Governor).
(Source: The Sheet, 8/2/2014, via AARoads)

In June 2016, the CTC authorized relinquishment of right of way in the Town of Mammoth Lakes along Route 203 between Mountain Boulevard and Minaret Road, consisting of a frontage road. The Town, by relinquishment agreement dated May 13, 2016, agreed to waive the 90-day notice requirement and accept title upon relinquishment by the State.

In June 2021, the CTC approved amending the STIP to use the funding available through the 2021 Mid-Cycle STIP and share distribution of the federal Coronavirus Response and Relief Supplemental Appropriations Act of 2021 funds (COVID Relief Funds) to add a new project to the STIP: Main Street (Route 203) Multi-Use Path (PPNO 2683); program $250K to the PS&E phase in FY 2021-22.
(Source: June 2021 CTC Agenda, Agenda Item 2.1a.(19))