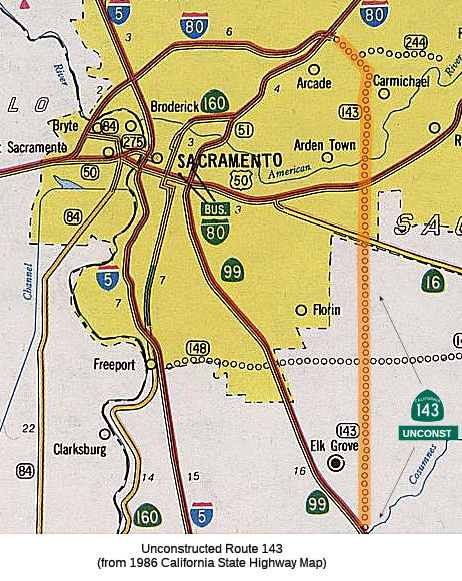 From Route 99 near Elk Grove to Route 244 near Carmichael.

"The department and State Transportation Board shall cooperate with the County of Sacramento and the Sacramento Regional Area Planning Commission in the transportation corridor study conducted by the county and the commission on the adopted route for Route 143. Such cooperation by the state shall be limited to furnishing existing data.

Why? According to Concrete Bob on AARoads: In November 1974, the Sacramento County Board of Supervisors voted 3-2 to reject the funding and construction of Route 65, Route 143 and Route 244. Construction on Route 143 and Route 244 was slated to begin in 1975. When Adriana Gianturco took over Caltrans in 1975, she worked with Caltrans and the Legislature to change the routes/abandon them. Sacramento County was very cooperative with Caltrans on selling off the rights of way for Route 65, Route 143 and Route 244, since they rescinded the plans for the freeways in November 1974. One of the County Supervisors who voted down the freeways had a developer brother-in-law who acquired much of the Route 143 right of way from Caltrans between Arden Way and American River Drive for a housing development. Twenty years after the plans for the freeways were yanked, the Sacramento Bee interviewed the County Supervisors who voted down the freeways. Two of the three supervisors who voted down the freeways regretted their decision.
(Source: Concrete Bob on AARoads, 7/22/2019)

There was a freeway routing adopted for this segment, but it was deleted in 1975. Existing arterials approximating the route are currently utilized, and in 2002 Caltrans recommended removing the route definition from the state highway system (but this never appeared to happen). Approximate roads includes Grant Line Road and Bradshaw Road, but no local roads fit the total description of a traversable highway.

This route was proposed (routing determined) LRN 247, defined in 1959. It split off Route 244 near Cypress Avenue, continued to near Rita St., and then ran S along Mayhew Road. Route 143 was not defined in the initial set of state signed routes in 1934.

According to an article in the Sacramento Bee in May 2004, a connection from the Mayhew area to I-80 is proposed along what appears to be the same routing as unbuilt Route 143. The big difference in the May 2004 proposal, which would cost $1.25 billion is that it would have no exits and be built as an underground tunnel from US 50 at Mayhew to I-80 north of Auburn Boulevard. The plan is for a 5.8-mile underground expressway, crossing below the river near the Mayhew drain near Rancho Cordova and making a beeline under Eastern Avenue, linking freeway to freeway. The tunnel is just one of dozens of ideas officials are considering in an effort called "Mobility Strategies for County Corridors". The corridors being studied include Watt Avenue, Greenback Lane, Hazel Avenue, Madison Avenue, Sunrise Boulevard, Howe Avenue, Florin Road and El Grove-Florin Road.

Submitted for inclusion in the interstate system in 1958; not accepted.