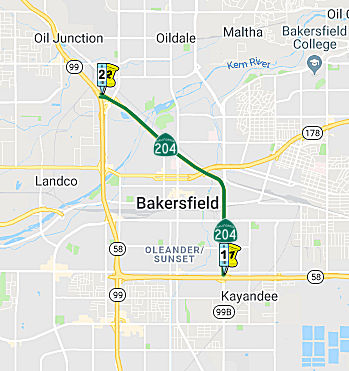 From Route 58 to Route 99 near Bakersfield via Union Avenue and Golden State Avenue.

This was part of the original routing of US 99. Before 1964, US 99 ran along Union Ave and Golden State Avenue in Bakersfield. After 1964, Route 99 was shifted westward, and the 1964 definition of Route 204 was applied to the old surface routing. Both were LRN 4, defined in 1909. Portions of this ran on the routing that was LRN 141. 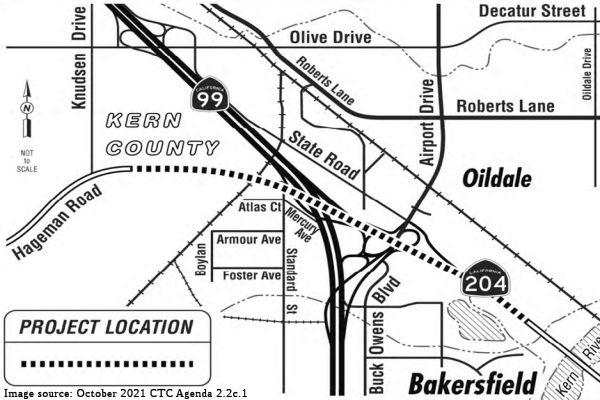 This project proposes to extend Hageman Road in the northwest corner of the city of Bakersfield from Knudsen Drive to Golden State Avenue (Route 204) building a four-lane road. The total length of the project is about 1.5 miles. The project would build a new bridge over both the San Joaquin Valley Railroad and Route 99 and a new double-box culvert at the Beardsley Canal lateral. The existing bridge over Airport Drive would be widened, and existing ramps at the Airport Drive/Golden State Avenue interchange would be modified. A new bike path crossing Route 99 would also be included in the project.
(Source: Project Page, retrieved 9/2021)

In April 2017, an update was provided on the Hageman Flyover. This project connects Hageman Road to Golden State Highway/Route 204 with roadway across Route 99 (~ 204 KER 6.596). The Design Phase is 95 percent complete; but right-of-way acquisition has not started. Caltrans is finalizing draft plans. The city is working with San Joaquin Valley Railroad on a construction and maintenance agreement and a California Public Utilities Commission permit application. Right-of-way appraisals and acquisition will not begin until design has progressed to 100 percent.
(Source: Bakersfield.Com, 4/20/2017)

In June 2021, the CTC approved amending the STIP to use the funding available through the 2021 Mid-Cycle STIP and share distribution of the federal Coronavirus Response and Relief Supplemental Appropriations Act of 2021 funds (COVID Relief Funds) to add a new project to the STIP: Hageman Road Extension to Route 204 and Flyover (PPNO 3525); program $2,686K to the R/W capital phase in FY 2022-23.
(Source: June 2021 CTC Agenda, Agenda Item 2.1a.(19))

In October 2021, the CTC approved the following project for future consideration of funding: 06-Ker-204, PM 5.9/6.8. Hageman Road Extension Project from Knudsen Drive to Golden State Avenue at Airport Drive. Construct a four-lane road from Hageman Road and Knudsen Drive to  Route 204/Golden State Avenue in Kern County.  (MND) (PPNO 3525) (STIP) (Related Item under Ref. 2.5c.(2)/2.5v.(1)). This project is located on Hageman Road, in the city of Bakersfield, in Kern County. The Department proposes to extend Hageman Road from Knudsen Drive to Golden State Avenue at Airport Drive. The project will construct a four-lane arterial road on this segment and include a structure over Beardsley Canal and approximately a one-quarter mile of elevated structures, spanning the San Joaquin Valley Railroad, Route 99 connector ramp, and mainline Route 99. The existing bridge over Airport Drive will be widened and the existing ramps at the Airport Drive/Route 204 interchange will be modified. In addition, a bicycle path will be added along the extension. This project is currently programmed in the 2020 State Transportation Improvement Program (STIP) for a total of $63,723,000, which includes local funds, Regional Improvement Program funds, and Highway Bridge Program funds. Construction is estimated to begin in 2022. The scope, as described for the preferred alternative, is consistent with the project scope as programmed by the Commission in the 2020 STIP. A copy of the MND has been provided to Commission staff.  The project will result in less than significant impacts to the environment after mitigation.
(Source: October 2021 CTC Agenda, Agenda Item 2.2c.(1))

In October 2021, the CTC approved an allocation of $2,686,000 for the following locally-administered STIP project: 06-Ker-204 5.9/6.8. PPNO 06-3525; ProjID 0614000033; EA 48450. Extend Hageman Road Easterly Across Route 99 and Connect to Route 204 In Bakersfield. Construct the Hageman Road extension from Knudsen Drive to Golden State Avenue at Airport Drive. The proposed project would provide a connection between northwestern and downtown Bakersfield. The project would extend Hageman Road from just east of the intersection with Knudsen Drive, cross over Route 99, and connect with Golden State Avenue. The extension of Hageman Road would be a four-lane road with two 12-foot-wide travel lanes in each direction, a 12-foot-wide median with barrier, and 8-foot-wide outside shoulders. The Knudsen Drive intersection would have signals. A double-box culvert structure would be built over the Beardsley Canal lateral, with bridges over the San Joaquin Valley Railroad, and Route 99. The existing bridge over Airport Drive would be widened, and ramps at the Airport Drive and Golden State Avenue interchange would be modified. The roadway section would transition to match the existing roadway at the west and east ends of the proposed project. Allocation: R/W $2,686,000.
(Source: October 2021 CTC Agenda, Agenda Item 2.5c.(2)/.5v.(1))

The portion of Rout 204 between Q Street and F Street in the City of Bakersfield (~ KER 4.278 to KER 5.143) is named the "Vernon P. Valenzuela Memorial Highway". It was named in memory of Vernon P. Valenzuela, who was born in 1949. He was raised in Bakersfield, California, the youngest of five siblings. In 1966 Mr. Valenzuela quit high school to join the United States Army and volunteered to serve in Vietnam, serving from October 1967 to May 1968, when he was wounded in battle. After his honorable discharge in 1969, he returned to Bakersfield and obtained his high school diploma by attending night school. The following September, Mr. Valenzuela became the first member of his family to attend college. Mr. Valenzuela discovered the large Associated Veterans Students Club at Bakersfield College, and his association with the organization began his life as a leader and veterans advocate. Mr. Valenzuela became an active student and held positions as President of both the Associated Veterans Students Club and the Bakersfield College Student Body. After graduating with an associate of arts degree in 1973, Mr. Valenzuela continued his education at California State University, Bakersfield (CSUB), where he was a charter member of the first student council and began working in the Veterans Cost of Instruction Program (VCIP). While still attending CSUB, Mr. Valenzuela was hired to be Assistant Director of the Bakersfield College VCIP. Mr. Valenzuela obtained his bachelor’s degree in June 1975 and began counseling students at Bakersfield College, many of whom were veterans. He touched so many people’s lives during his college years that for the rest of his life he would run into people he knew while at college, who remembered him, who were helped by him, or whose children thanked him. Mr. Valenzuela received his masters degree in counseling in 1977 and earned his license in marriage and family therapy in 1979, specializing in treating post-traumatic stress disorder (PTSD). Mr. Valenzuela began his private practice shortly after his marriage in 1981, focusing on veterans with PTSD. He worked as a contract counselor with the Sepulveda Vet Center from 1981 to 1989, inclusive. During the 1990s, Mr. Valenzuela traveled to the Vietnam Veterans Memorial in Washington D.C. and joined the Vietnam Veterans of America (VVA). He became the President of the charter chapter of Bakersfield VVA and gradually worked through local, state, and national levels of the organization. Mr. Valenzuela served as VVA’s California president in 1993, and went on to serve on national committees for PTSD, substance abuse, and the Veterans Initiative, which involved several trips to Vietnam to recover MIA remains. Mr. Valenzuela presented PTSD seminars throughout the nation, and was called on to work with Oklahoma City bomb survivors and United Auto Workers members in the New York area after September 11, 2001. During his involvement with VVA, Mr. Valenzuela became a leading advocate for the Vet Center program, meeting quarterly in Washington with Readjustment Counseling Services Director Dr. Alfonso Batres to discuss issues related to the Vet Center program. In 1997, Mr. Valenzuela made a conscious decision to bring his efforts to a more local level and was welcomed into the Kern County Network for Children. His efforts over the last decade included advocating for children and bridging the gap of community services for veterans. Throughout the late 1990s, he collaborated with the network to raise funds for graduating seniors and families in need during the holiday season within Kern County. In April 2008, Mr. Valenzuela was recruited to be the first Team Leader for the new Bakersfield Vet Center, helping to establish a much needed counseling resource for combat veterans throughout Kern County; as Team Leader of Bakersfield Vet Center, Mr. Valenzuela’s goal was to meet all needs of the veterans, and make the vet center a safe haven, a place where veterans could come for any help or need. He wanted the vet center in Bakersfield to be a model for all other vet centers, knowing that the people of Bakersfield are truly unique in their giving capacity and collaborative efforts. In addition to providing counseling and overseeing the operation of the vet center, Mr. Valenzuela was instrumental in beginning the Veterans Justice Program in Kern County and, along with other veterans and community resources, created and chaired the newly formed Kern County Veterans Collaborative. Mr. Valenzuela’s goal was not just to provide counseling services, but also to provide any service or answer any question a veteran may have. Mr. Valenzuela passed away at 63 years of age on Monday, March 26, 2012, overlooking the ocean and surrounded by his family. Named by Senate Concurrent Resolution 4, August 15, 2013. Resolution Chapter 69.
(Image source: Bakersfield Californian; Legacy.Com) 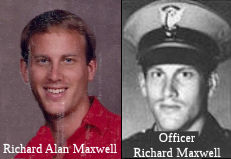 The interchange between Rout 99, Route 204, and Airport Drive in Bakersfield (~ KER 6.431) is named the "Richard Alan Maxwell Memorial Interchange". State Traffic Officer Richard Alan Maxwell began his career in law enforcement with his appointment to the California Highway Patrol on May 15, 1989, and was killed in the line of duty on July 11, 1994. Named by Senate Concurrent Resolution 60, Chapter 135, in 1994, and Assembly Concurrent Resolution No. 119, Chapter 147, in 1994.
(Image source: Find a Grave, Officer Down Memorial Page)

Constructed to freeway standards from North of Bakersfield to Route 99. This is likely a business loop for Route 99. Some of the original routing near PM 6.5 has been submitted for relinquishment in December 2000.