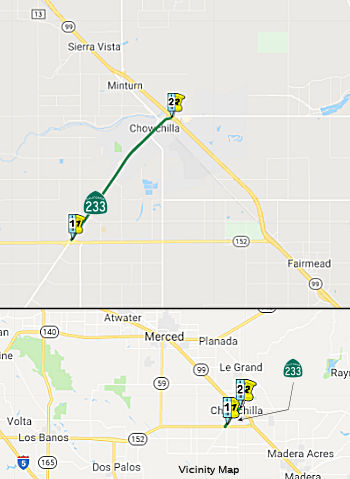 From Route 152 to Route 99 at Chowchilla via Robertson Boulevard.

This routing remains as defined in 1963.

In 1953, Chapter 1787 defined LRN 233 as: “(a) High Street, Oakland, between [LRN 69] and [LRN 5]; (b) [LRN 227] near the intersection of Park Boulevard, Oakland to [LRN 75] near Lafayette”. Preliminary studies were completed in 1956 covering the location for this future freeway. On December 19, 1956, after various public meetings and a hearing before the Highway Commission, the last gap in the route was adopted and declared a freeway. This future facility will consist of initially four lanes, future six lanes, and starting at the Mountain Boulevard Freeway in Oakland, will traverse Shepherd Canyon and tunnel some 1,400 feet through the Oakland hills. It will span the Redwood Canyon in Contra Costa County and traverse the range of hills easterly thereof entering and crossing the Moraga Valley just north of the present town site. It traverses close to St. Mary's College and terminates at a junction with Route 24 at Pleasant Hill Road. In 1957, Chapter 52 renumbered this definition as LRN 235. It does not appear to have ever been constructed, but corresponds to an unconstructed portion of Route 77.

However, Chapter 1791 also defined LRN 233 as “[LRN 83] near Sierraville to [LRN 21] near Vinto, via Loyalton. Provided, however, that Section 600 of the Streets and Highways Code shall be applicable to the route added to the State Highway System by this section the same as if said route had been added by the Collier-Burns Highway Act of 1947, and the Department of Public Works shall not be required to maintain any portion of said route until the same has been laid out and constructed as a state highway”