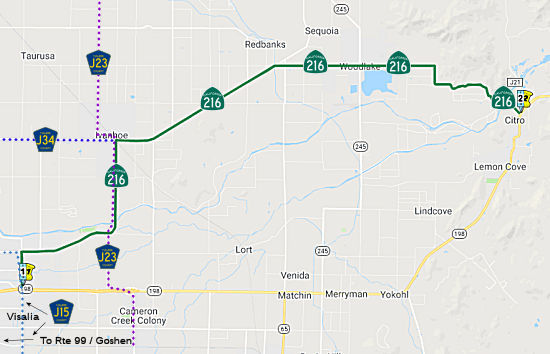 From Visalia to Route 198 near Lemon Cove via Woodlake.

This was LRN 133 between Visalia and Woodlake. It was LRN 131 between Woodlake and Lemon Cove. Both routes were defined in 1933. It was not signed before 1963.

Route 216 and LRN 133 originally extended west into Visalia on Houston Avenue. LRN 133 would have utilized Northeast 3rd Avenue to reach LRN 132 at Court Street which eventually became Route 63. It seems this alignment stayed the same into the 1990s or early 2000s on Route 216 before it was shifted onto Lover's Lane. LRN 133 seems to have used a bridge over the Saint John's River near modern Cutler Park on Mills Drive. Route 216 was created out LRN 133 and part of LRN 131 in 1964 but neither appeared to be signed until 1969. Note that this explains why County Sign Route J15 shares a routing with Route 216 along Lovers Lane N of Route 198, and would have continue W along Houston Ave (Route 216) to Ben Maddox Way, where County Sign Route J15 continued N.
(Source: Gribblenation Blog (Tom Fearer): "California State Route 216")

A routing along Lovers Lane between Houston Road and Route 198 in Visalia was adopted on July 9, 1993.

In September 2020, it was reported that CalTrans plans to improve the interchange between Route 216 and Route 198. In May 2016, Visalia and CalTrans staff held a joint public hearing to discuss improvements to the interchange. In order to solve congestion at the Lovers Lane interchange of Route 198, the city and (CalTrans) are proposing improvements and changes at the intersections of Lovers Lane and Noble Avenue, Lovers Lane and Route 198 eastbound ramp, Mineral King Ave and Route 198 westbound ramp and Lovers Lane and Mineral King. Originally proposed with a $60 million price tag in 2016 to close a portion of Mineral King Ave affecting both homes and businesses, the current project relies on a future planned highway interchange at Tower Road (Road 148), less than a mile east of Lovers Lane to relieve congestion at the Lovers Lane interchange. The new project is estimated to cost $21.5 million. The California Transportation Commission approved for the design and environmental phase of the project to be funded through the State Highway Operation and Protection Program (SHOPP) fund. It is anticipated the design and right-of-way for the project could be completed by early 2023, with bidding and construction complete by the middle of 2025. The proposed improvements include:
(Source: Sun Gazette, 9/16/2020)

In September 2010, the CTC approved for future consideration of funding a project in Tulare County that will widen Route 216 (Houston Ave) to four lanes from Lovers Lane (216 TUL 1.967) to McAullif Street (216 TUL 2.462) in the city of Visalia. The project is programmed in the 2010 State Transportation Improvement Program. Construction is estimated to begin in Fiscal Year 2011-12. Total estimated project cost is $11,200,000 for capital and support. The scope as described for the preferred alternative is consistent with the project scope programmed by the Commission in the 2010 State Transportation Improvement Program. The project will require both commercial and residential relocations. In addition the project would remove on-street parking spaces used for businesses in the area.

In October 2012, the CTC approved $4,820,000 in funding for the Route 216 Widening in Visalia, from Lovers Lane to east of McAullif Street. Widen to four lanes.

In January 2019, the CTC authorized relinquishment of right of way in the city of Visalia (City) along Route 216 (Houston Avenue) on North Lovers Lane, McAuliff Street, and McAuliff Court (3 segments, 06-Tul-216-PM 1.97/2.46), consisting of sidewalks and streets. The City by relinquishment agreement dated September 18, 2018, agreed to waive the 90-day notice requirement and accept title upon relinquishment by the State.
(Source: January 2019 CTC Minutes, Agenda Item 2.3c)

In September 2020, it was reported that CalTrans presented plans to widen Lovers Lane, also known as Route 216, from Mineral King Avenue to Houston Avenue in April 2020, and is expected to complete its environmental studies for the rehabilitation project sometime in October 2020. In addition to repaving the roadway, the project will also widen Lovers Lane to accommodate a bike lane, realign right turns at some intersections, ADA ramps at intersections and install new sidewalks to fill in the gaps along the state route. Councilmembers were leery of how the widening of the Lovers Lane would affect property owners and the tree-lined median.  Caltrans noted that the trees between Duran Drive and Mill Creek Parkway would likely come out there should be enough right-of-way to save trees between Goshen Avenue and Houston Avenue. The street rehabilitation project is estimated to cost about $26 million. Hussein Senan, project manager for CalTrans, said the public review of environmental documents should begin in November with a final environmental impact report being issued in May 2021. CalTrans was looking to break ground on the project in the fall of 2023.
(Source: Sun Gazette, 9/16/2020)

In December 2017, the CTC authorized relinquishment of right of way in the city of Woodlake adjacent to Route 216 (Naranjo Boulevard) between Magnolia Street and Palm Street (06-Tul-216-PM 13.9/14.0), consisting of superseded highway right of way. The City, by letter dated November 22, 2016, agreed to waive the 90-day notice requirement and accept title upon relinquishment by the State.

Caltrans is exploring creating a roundabout on this route at the intersection of Route 216/Route 245 (216 TUL 14.015) in Woodlake. Other potential/planned roundabout locations in the San Joaquin Valley include Route 145/Jensen near Kerman, Route 168/Auberry Road in Prather, Route 43/Route 137 in Corcoran, Route 190/Road 152 east of Tipton, Route 190/Road 284 east of Porterville, and Route 155/Browning Road in Delano. A 2007 study of 55 roundabouts in the U.S. found a 35% reduction in accidents and a 90% reduction in fatal accidents when intersections with stop signs or signals were converted to roundabouts. It costs about the same to build a roundabout as to put up traffic signals, and they need significantly less maintenance than traffic signal intersections -- about 60% to 90% less, depending on how much landscaping work is required.

In May 2015, the CTC approved for future consideration of funding a project in Tulare County that will widen the bridges and replace the railings at Sand Creek Bridge on Route 201 near Cutler, the Friant-Kern Canal Bridge on Route 201 near Seville, and the Kaweah River Bridge on Route 216 near Lemon Grove (216 TUL 18.68). The project is programmed in the 2014 State Highway Operation and Protection Program. The estimated cost is $15,298,000 for capital and support. Construction is estimated to begin in Fiscal Year 2016-17. The scope, as described for the preferred alternative, is consistent with the project scope programmed by the Commission in the 2014 State Highway Operation and Protection Program.

In August 2018, it was reported that the CTC approved the $18.4 million Tulare 201 and 216 Bridge Widening & Rail Replacement Project, which will replace bridge rail and widen the Sand Creek Bridge and the Friant-Kern Canal Bridge on Route 201 near the city of Kingsburg in Tulare County, and the Kaweah River Bridge on Route 216 in Tulare County.
(Source: Hanford Sentinal, 8/22/2018)

This route runs from the junction of Route 139 and Horse Lake Road to Route 299 near Adin. This is Route 139.