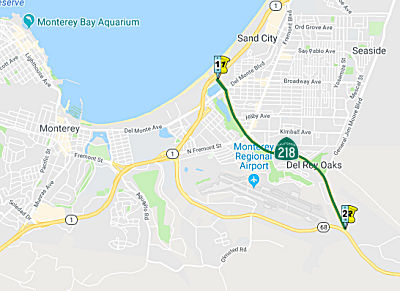 From Route 1 to Route 68 via Canyon del Rey.

In June 2018, it was reported that studies were started regarding the Canyon Del Rey (Route 218) corridor. According to the page, TAMC is leading the Canyon Del Rey Boulevard (Route 218) Corridor Study in partnership with the cities of Del Rey Oaks, Seaside and Caltrans. The Corridor Study will gather data, conduct a technical traffic forecast analysis, and utilize public input to identify a set of complete streets, stormwater drainage, active transportation, and environmental and wildlife preservation improvements for Canyon Del Rey Blvd from Route 1 to Route 68. Preliminary concepts appear to include converting wye interchanges to roundabouts at Hilby Avenue and Harcourt Avenue, as well as a roundabout at Route 68, and improvements on North Fremont.

This route ran from the Route 62/Route 247 junction near Yucca Valley to Utah Trail Road in the town of Twentynine Palms. This is part of present-day Route 62.