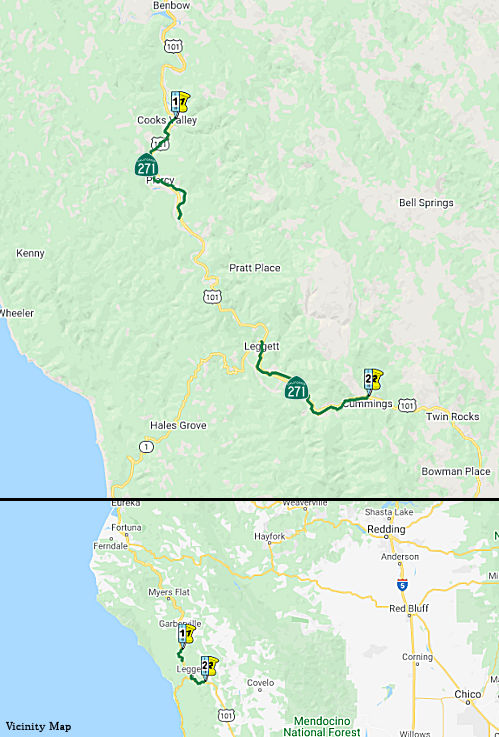 In 1970, Chapter 1473 defined Route 271 as “Route 101 near Cummings to Route 101 near the Humboldt-Mendocino county line.” This is a former segment of Route 101 that has been replaced by freeway. The known constructed segments are as follows; there is no cosignage between the segments:

According to Scott Parker (SParker) at AAroads, Route 271 is an "odd duck", intended to be a scenic alternative to US 101, which in the '60's and the '70's was being reconstructed as a limited-access facility generally uphill from the original route that for the most part followed a series of canyons or narrow valleys containing redwood groves. Route 271 was signed in two segments once the US 101 freeway was in place; it was intended that once a freeway segment from Leggett north to Smithe Grove State Park was constructed, Route 271 would be signed over the original highway, connecting those separate segments. Environmental concerns have since halted any freeway development along that stretch of US 101, hence the "split" route on Route 271; the southern section traverses the redwood-filled valley between Cummings and Leggett, while the northern serves Smithe Grove. If/when completed, Route 271 was intended to function exactly like Route 254 (Avenue of the Giants) further north, as a scenic US 101 alternative.
(Source: Scott Parker (SParker) at AAroads, 9/6/2016)

The history of future Route 271 begins with the approval of the 1909 First State Highway Bond Act.  LRN 1 in its original form was was designated between San Francisco north to Crescent City.  The route of LRN 1 would be extended to the Oregon State Line during the 1919 Third State Highway Bond Act and was known as the Redwood Highway. The construction of LRN 1 (then known as the Mendocino State Highway) sought to follow the Eel River watershed to bypass the Rattlesnake Grade. Much of the Rattlesnake Grade still exists as modern Bell Springs Road. In 1926, US 101 from San Francisco north to Crescent City was aligned over the Redwood Highway. A new segment of the Redwood Highway between Piercy and Rock Creek was opened in 1926, just prior to it becoming US 101. The November-December 1948 California Highways & Public Works discusses the straightening of US 101/LRN 1 between Red Mountain Creek and Piercy. During the 1964 Christmas Floods US 101 between Garberville-Cummings saw substantial damage as it did also through most of northern California.  The January-February 1965 California Highways & Public Works cited that US 101 near Leggett largely eroded down into the South Fork Eel River.  US 101 is shown as an expressway south of Garberville to the vicinity of Richardson Grove State Park on the 1969 Division of Highways State Map.  US 101 is shown to have a planned bypass route of Richardson Grove State Park which shown continuing to an existing expressway segment near Cummings.  The 1970 Division of Highways State Map shows the Richardson Grove bypass under construction, ultimately it never would be completed. The original routing of US 101 through Richardson Grove appears to have been planned to be renumbered as Route 271. The 1977 Caltrans State Map no longer shows the planned US 101 bypass of Richardson Grove suggesting it was cancelled.  Notably the north and south segments of Route 271 are shown as being present (as evidenced by US 101 being an expressway through Piercy) along with an unbuilt realignment between Piercy-Leggett.  The Piercy-Leggett realignment of US 101 had it been constructed would have likely filled the gap between the north and south segments of Route 271.

Note that it is unlikely that the planned US 101 expressway through Richardson Grove will result in the old routing becoming Route 271, as the new expressway will use the existing US 101 routing.

In June 2017, the CTC approved for future consideration of funding a project that replaces the McCoy Creek Bridge (No. 10-0036) on Route 271 (01-Men-271, PM 17.70/18.00), in Mendocino County. The project will be funded from State Highway Operation and Protection Program (SHOPP) funds and is programmed in the 2016 SHOPP for an estimated $9.8 million Construction (capital and support) and Right of Way (capital and support). Construction is tentatively scheduled to begin in Fiscal Year 2018-19. The scope, as described for the preferred alternative, is consistent with the project scope programmed by the Commission in the 2016 SHOPP. A copy of the MND has been provided to Commission staff. The project will result in less than significant impacts to the environment after mitigation. The following resource area may be impacted by the project: biological resources. Avoidance and minimization measures will reduce any potential effects on the environment. These measures include, but are not limited to, a revegetation plan will be prepared for the project, Environmentally Sensitive Areas will be designated on construction plans, water drainage from the bridge deck will be channeled via scupper onto rock slope protection, and the work window for demolition of the existing bridge will be from September 15 to October 31 to protect hibernating bat colonies. As a result, an MND was completed for this project.