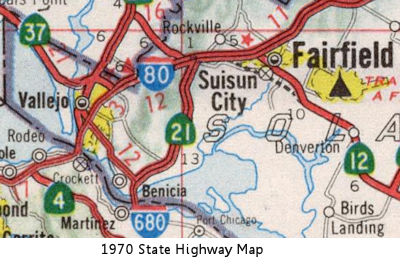 Route 21 was the former surface street routing that became the new I-680. Part of Route 21 used Pacheco Boulevard, Contra Costa Boulevard in the Concord/Pleasant Hill area and Main Street in Walnut Creek. The next street south is Danville Boulevard, through Walnut Creek, Alamo and Danville; it becomes Hartz Avenue in Danville before becoming San Ramon Valley Boulevard. Other former routings include San Ramon Valley Boulevard between Danville and Dublin, San Ramon Road in Dublin, and Foothill Road from I-580 south to Sunol. For a while, Route 21 and I-680 were cosigned.

Route 21 was not signed as part of the initial state route signate in 1934.

In the mid-1950s, Route 17 was moved to a new routing (what is now the I-880 routing). Route 21 was extended at that time to meet the new Nimitz Freeeway from Warm Springs Road along an extension of Mission Blvd to Warren Ave.

Route 21 diverged from Route 9 near Mission San Jose, and ran to Route 84 near Sonol. This segment was LRN 108, defined in the 1933 definition of secondary routes. The signage for Route 21 first appeared in October 1935; CHPW reported that signed Route 21 had been added, running from Mission San Jose to Walnut Creek via Sunol and Dublin. In understanding this routing, now that before 1964, what is now I-680 was Route 21.

From Sonol, Route 21 continued NE through San Ramon, Danville and Alamo to Route 24 near Walnut Creek. This segment was LRN 107, also defined in 1933.

There are sections of Route 680 that veer from the old alignment when you get into towns such as Walnut Creek, etc. Before the completion of the Benecia-Martinez Bridge, the Route 21 alignment used Pacheco Blvd to get into Martinez, and then a ferry to Benicia. Route 21 ended at the intersection of the old Mission Grade Road and Mission Blvd.

It appears that some sections of this route were part of Route 40. According to Chris Sampang, US 40 followed the Goodyear Road southwest of Fairfield, California, crossing the Sacramento River at Benicia. This is part of what was Route 21.

The Gribblenation Blog (Tom Fearer) Interstate 680 over the Benicia-Martinez Bridge and the legacy of California State Route 21, 2/22/2019, has a detailed summary of the specific routings and history of Route 21.

In 1909, the routing that would become LRN 21 was defined in the First Bond Act as running "from [LRN 3] near Richvale to Oroville." At the same time, the First Bond Act authorized a route from Oroville to Quincy (this was to become LRN 30). In 1919, the Third Bond Act extended the future LRN 21 to Quincy, and (at least within the Highway Commission, for it wasn't defined legislatively) LRN 30 was transferred to LRN 21. In 1931, Chapter 82 extended LRN 21 to "[LRN 29] near Chats via Quincy and Beckwourth Pass." (Chats is a former town near the Nevada State Line, near the area now called Hallelujah Junction). By 1935, LRN 21 was codified into the highway code as the following two segments:

The portion from [LRN 3] near Richvale to Quincy via Oroville was considered a primary route.

In 1957, Chapter 36 changed the definition to combine the two segments, making it "from [LRN 3] near Richvale to [LRN 29] near Chats via Quincy and the Beckworth Pass" (note the change in routing).