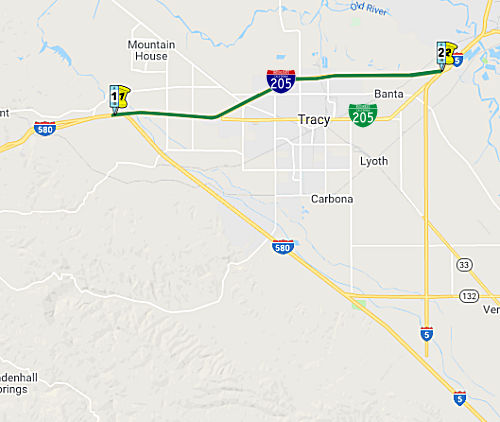 From Route 580 west of Tracy to Route 5 east of Tracy.

Tom Fearer on the Gribblenation Blog noted the following: There is a hell of backstory with the alignment history. The original alignment that became I-205 first ran on what is now the I-205 Business Loop on 11th Street which was part of the first US 48. US 48 was one of the original US Routes and ran through Tracy until 1935 when it was replaced by an extended US 50. The shift can be seen on the 1934 and 1936 California State Highway Maps. I-205 was completed by 1970 and US 50 was shifted off of 11th street to multiplex it. US 50 was cut back to Sacramento by 1972 which left the I-205 designation alone. I-205 can be seen appearing between the 1969 and 1970 state highway maps.
(Source: Gribblenation Blog "November Bay Trip Part 1; Interstate 205" 11/2017)

In May 2016, the CTC approved $60,464,000 for a project near Livermore, on I-580 from the San Joaquin County line to the Greenville Overhead (PM0.1/R8.0); also on I-205 from Midway Road to the San Joaquin County line (PM L0.0/0.4); also near Castro Valley on Route 580 from Eden Canyon Road to Strobridge Avenue (PM R26.1/30.3); also in San Joaquin County near Tracy on Route 580 from Patterson Pass Road to the Alameda County line (PM 13.5/15.3). Outcome/Output: Improve safety and ride quality by rehabilitating 54.6 lane miles of distressed mainline and ramp pavement and install signs, lighting, and vehicle pullouts. Also, install ramp metering at 12 locations. 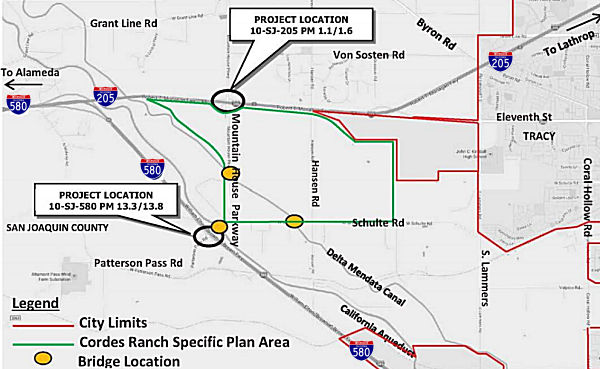 In January 2018, the City of Tracy submitted to the CTC request that a portion of the Central Valley Gateway Project be approved for Trade Corridor Enhancement Program (TCEP) funding. At the May 2018 CTC meeting, staff recommended, and the Commission approved, $12.78 million in Trade Corridor Enhancement Program funds for the right-of-way and construction components for the Central Valley Gateway project which includes the Route 205/International Parkway Interchange Project and the Route 580/International Parkway Interchange Project. Note that "International Parkway" is a renaming of Mountain House Parkway.

The Central Valley Gateway Project is a trucking corridor along a City’s Surface Transportation Assistance Act of 1982 (STAA) network connecting with State’s Primary Freight Network (PFN) by way of 2 interchanges on the interstate freeway system. The scope of the Project includes elements along both the City of Tracy arterial network as well as both interchanges. While the area is referred to as ‘Cordes Ranch’, in reference to the name of the subdivision in which entitlements were granted by the City, the name has been changed to ‘International Park of Commerce’, or IPC. The overall Central Valley Gateway (CVG) Project consists of several infrastructure elements. These elements include:
(Source: City of Tracy TCEP Application, 1/30/2018)

In 2014, the City of Tracy nominated the I-205/ Mountain House Parkway and I-580/Mountain House Parkway interchange projects to their Metropolitan Planning Organization (MPO) (www.sjcog.org) for inclusion in their Regional Transportation Plan (RTP). The projects were included as 2014 RTP amendments for the “Environmental Only” phase. The scoping documents for the projects were completed in June, 2015 and the environmental phase of the projects were started in early 2017. The construction phases of work are now being included in the 2018 RTP(SCS) by SJCOG. The RTP update is projected to be approved at the November 2018 Board meeting of SJCOG.

Note that the corridor is already home to an Amazon Fulfillment Center and a Costco meat factory.

The SJCOG request noted that the construction of the Interchange and Parkway Improvements will improve freight and employee access to the International Park of Commerce (IPC), an industrial, retail and office park comprised of approximately 1,800 acres and located in the City of Tracy. The successful development of the Prologis IPC at the foot of the Altamont Pass is essential for economic sustainability and job creation in the Tracy/San Joaquin County Region. The initial request was for $5,000,000 for Plans, Specifications, and Cost Estimates (PSE’s) and/or right of way acquisition for (IPC) Interchange and Parkway improvements connecting I-205 and I-580 in Tracy, California. The total improvements to the interstate interchanges and connecting parkway will include:
(Source: SJCOG International Parkway brochure)

In December 2018, Agenda Item 4.24 on the CTC agenda addressed this project, noting that the Trade Corridor Enhancement Program guidelines state that projects programmed with capital costs must file a Notice of Determination, in accordance with the California Environmental Quality Act, within six months of program adoption, or the project will be removed from the program. Based on this requirement, a Notice of Determination for the Central Valley Gateway project was required to be filed by November 16, 2018. The City of Tracy did not meet this deadline, therefore, consistent with the Trade Corridor Enhancement Program guidelines, staff recommended (and the CTC approved) the removal of City of Tracy’s Central Valley Gateway Project.
(Source: December 2018 CTC Minutes, Agenda Item 4.24)

TCRP Project #107 will widen the segment of this route from Tracy to I-5 to six lanes. This project was originally delayed due to past transportation funding shortfalls, when it was programmed to Fiscal Year 2006-07. However, in September 2005, the San Joaquin Council of Governments proposed to replace the STIP funds with Measure K funds via an AB 3090 to advance this project to construction in Fiscal Year 2005-06. The Measure K funds along with the TCRP funds will fully fund construction. There was also a declaration of no environmental impact in September 2005. With this, the project is scheduled to complete Phase 4 in August 2009. In July 2008, truck bypass lanes opened on I-580 in the area as part of the widening process. The additional lanes opened in late May 2009.

In 2007, the CTC recommended using the Corridor Mobility Improvement Account (CMIA) to fund auxiliary lanes at 4 locations in Tracy ($25M).

In October 2018, the CTC authorized for future consideration of funding the following project for which a Mitigated Negative Declaration (MND) has been completed: I-205 in San Joaquin County (10-SJ-205, PM R4.5/R9.0). Install cameras and ramp metering on a portion of I-205 in the city of Tracy. (PPNO 3146) This project is located on I-205 from the Byron Road Undercrossing to the Paradise Road Overcrossing in the city of Tracy in San Joaquin County. The project proposes to Install ramp meters and Intelligent Transportation System (ITS) elements. The proposed project is currently estimated to cost approximately $27.1 million. This project is fully funded and is currently programmed in the 2018 SHOPP for approximately $26.5 million which includes Construction (capital and support) and Right-of-Way (capital and support). Construction is estimated to begin in Fiscal Year 2019-20. The scope, as described for the preferred alternative, is consistent with the project scope programmed by the Commission in the 2018 SHOPP.
(Source: October 2018 CTC Agenda Item 2.2c.(1))

The portion of I-205 from I-5 to I-580 is named the "Robert T. Monagan Freeway". It was named by Assembly Concurrent Resolution No. 75, Chapter 128, in 1985. Prior to being elected city councilman and mayor of Tracy, California, in 1958, he served as Secretary Manager of the Tracy Chamber of Commerce and then went on to become an administrative assistant to our Congressman Leroy Johnson. During this period, he found time to manage the Eisenhower–Nixon campaign in San Joaquin County, California. In 1960, he was elected to California's 12th Assembly District and served as an Assemblyman until 1973. Assemblyman Monagan was elected to the position of Minority Leader by his Republican colleagues in 1965 and was reelected to that post each succeeding year, except for the years he served as Speaker of the Assembly (from January 6, 1969, until January 4, 1971). While he was in the California State Assembly, he also served as President of the National Conference of State Legislative Leaders and on the Executive Board of both the Council of State Governments and the National Legislative Conference. In 1973, he was appointed by President Nixon as Assistant Secretary for Congressional and Intergovernmental Affairs in the United States Department of Transportation. He then served as Chairman of the California State World Trade Commission, a member of the Board of Directors of the Independent Colleges of Northern California, a member of the President's Advisory Council on Private Sector Initiatives (appointed by then President Ronald Reagan), and as a member of the Board of Directors of the California Journal. He also has served as President of the California Manufactures Association from 1974 until he took office as President of the California Economic Development Corporation in 1984.
(Source: a biography from the Stockton Masonic Lodge; Image source: Bob Monagan on Twitter; LA Times)

Approved as chargeable interstate in 11/57. Freeway.

It appears that this route was originally proposed in April 1958 with the designation I-112. By August 1958, it was being proposed as I-205, which was the number accepted.

Overall statistics for I-205:

In 1935, Chapter 426 added the route “from [LRN 165] near Los Angeles River in Los Angeles to [LRN 161] in Pasadena at Broadway Avenue” to the highway system with no number. This route was achieved through a compromise; the mileage for the route was transferred from LRN 186.