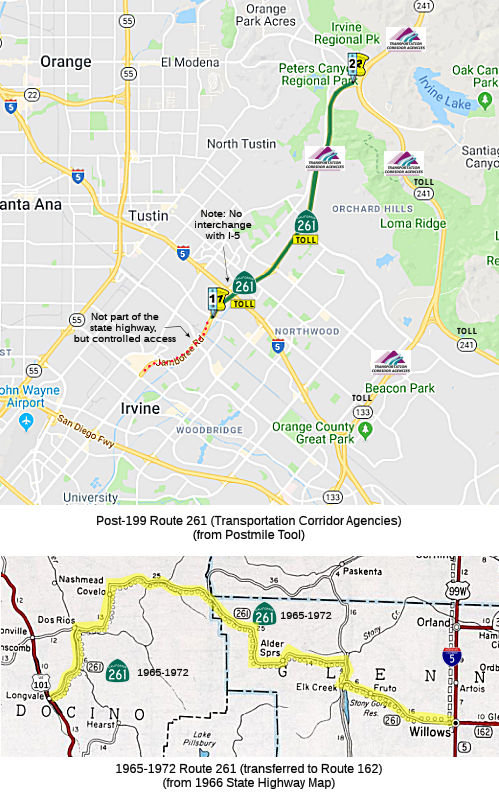 From Walnut Avenue in the City of Irvine to Route 241.

The original Route 261 was a planned highway over Mendocino Pass. Part of the justification for its creation was the damage by the 1964 Christmas Floods to the existing Covelo Road at the Eel River.  Covelo Road is the primary access point to Round Valley Indian Reservation. By 1969, Route 261 had been constructed to state standards east of US 101 to the Eel River in Dos Rios and west from I-5 to Elk Creek.
(Source: Gribblenation Blog (Tom Fearer), "California State Route 261", 1/21/2022)

In 1972, Chapter 1216 repealed the route definition and transferred the routing to Route 162.

In 1991, Route 133 was brought into the TCA system, bringing changes to the route definitions. SB 732, Chapter 775 created a new definition of Route 261 as “Route 5 near the border of the Cities of Tustin and Irvine to Route 231”, using a routing transferred from former Route 231. Route 231 was changed to run from the end of Route 133 to Route 91. Route 241 was truncated to run from the Route 231/Route 241 junction near Bee Canyon and Limestone Canyon Park to I-5. The legislative definition of Route 241 didn't need to change, as the western end remained Route 231.

In 1996, Route 133 brought further changes. Chapter 1154 changed the origin of Route 261 from “Route 5 near the border of the Cities of Tustin and Irvine” to “Walnut Avenue in the City of Irvine” (Walnut Avenue and Jamboree). It also changed the terminus to reflect the renumbering of Route 231 to Route 241: “Walnut Avenue in the City of Irvine to Route 241.” This is part of the "Eastern Toll Road", a toll road that is part of the Orange County Transportation Corridors. At the same time, Route 231 was dropped. Route 241 became the main backbone, running from I-5 near San Clemente to Route 91. Route 133 was extended to take over the former portion of Route 231 between Laguna Canyon and Route 241.

According to Robert Cruickshank, the original road (Jamboree) was built as a joint project between the County of Orange and the City of Irvine, around 1989/90, to close a gap in Jamboree between Edinger and Barranca through the Tustin Marine Corps Air Station. The grade-separated interchange at Warner was constructed because as part of the agreement to build through the Marine base (now closed) the road had to have high sound walls and barbed wire atop those walls. The military may not have wanted a place where traffic would have been held up on their land, so that may have dictated the Warner interchange. In any event, since no state funds went into the construction of the road or maintenance of it, and since Jamboree was never a state route, the little freeway stub never got a state number. In the late 1990s, when the Route 261 toll road was being constructed, its builders decided to maximize travel speeds and times by constructing an interchange at Edinger, and another at Walnut (whereas before, there were simply stoplights). The result was that there was a freeway from Barranca northward, although Jamboree Road moves off of the freeway at the Walnut interchange. This was all part of a broader plan to improve road circulation between the new (in the early 1990s) developments in the Tustin Ranch area and the industrial parks in Irvine. There have always been plans to extend Tustin Ranch Road south from Walnut, through the old base, and connect with Von Karman Road at Barranca. This was to involve a grade-separated interchange at Edinger, like the one now at Jamboree, in large part because of the rail corridor that parallels Edinger near the old base.

The 1965-1972 routing (now Route 162) was not a state route before 1964. The route runs (signed as Route 162) along Covelo Road into Covelo. It then runs E along Mendocino Pass Road (unsigned, but marked FH-7) through the Mendocino National Forest. Mendocino Pass Road becomes Alder Springs Road in Glenn County. Signage of the road resumes naer Elk Creek when Route 162 exits the National Forest. The route enters Willows along Wood Steet.

The post-1991 routing was not a defined part of the state highway system before 1991.

Overall statistics for Route 261 (before consolidation with Route 231):