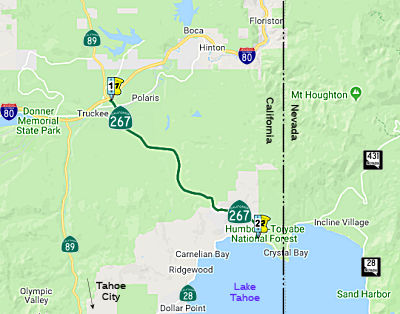 From Route 80 near Truckee to Route 28 near Kings Beach, Lake Tahoe via Northshore Boulevard.

A bypass for Route 267 in Truckee has been constructed to get all the Tahoe-bound traffic out of central Truckee. The Route 89 portion of the alignment is short; most of the bypass is for Route 267. The bypass includes a long viaduct across the Truckee River, which is visible as you come off the hill near the Central Truckee exit. This bypass is a 2 lane expressway with sufficient right of way to expand it to 4 lanes when needed. From the old interchange, the east and west bound on ramp will remain to provide the town with direct highway access. The original alignment of Route 267 continued into downtown Truckee on Old Brockway Road and to I-80/Route 89 on Donner Pass Road1.
(Note: 1: Gribblenation Blog: California State Route 267, 10/16/18)

This routing was first defined post 1963. The future alignment of Route 267 appears as a well maintained county route between Truckee over Brockway Summit to Lake Tahoe on the California Division of Highways maps of Nevada/Placer County in 19351.
(Note: 1: Gribblenation Blog: California State Route 267, 10/16/18) 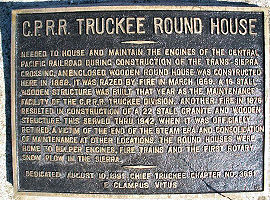 In Truckee is the "Truckee Round House Historic Plaque", named by Senate Concurrent Resolution 76, Chapter 106, in 1992. The Truckee Roundhouse Historical Plaque marks the location of the Central Pacific Railroad roundhouse maintenance facility from 1868 to 1942. The plaque reads: "C.P.R.R Truckee Round House:  Needed to house and maintain the engines of the Central Pacific Railroad during construction of the Trans-Sierra Crossing, an enclosed wooden round house was  constructed here in 1868. It was razed by fire in March 1869. A 16 stall wooden structure was built that year as the maintenance facility of the C.P.R.R. Truckee Division. Another fire in 1876 resulted in construction of a 22 stall granite and wooden structure. This served thru 1942, when it was officially retired. A victim of the  end of the steam era and consolidation of maintenance at other locations. The round houses were home to helper engines, fire trains and the first rotary snow  plow in the Sierra. Dedicated August 10, 1991 Chief Truckee Chapter No. 3691. E Clampus Vitus."
(Image source: Waymarking)

The Route 267 bypass in Truckee is named the "CHP Officer Glenn Carlson Memorial Bypass". California Highway Patrol Officer Glenn Carlson died in the line of duty at 33 years of age during a traffic stop near the foot of Donner Summit on November 15, 1963. He had stopped a trio of men after learning that the license plates on their car were stolen, but not knowing that the three men had robbed a bank in Sacramento and were making their escape. He was fatally shot as he stepped out of his patrol unit by one of the men enabling the fugitives to temporarily escape. All three men were ultimately arrested, prosecuted, and convicted for their crimes. Officer Carlson's death was the catalyst for then California Highway Patrol Commissioner Brad Crittenden to seek additional officers, and within two years of Officer Carlson's death, the number of uniformed officers was doubled. Named by Assembly Concurrent Resolution 138, Chapter 95, July 12, 2000. His granddaughter, Kelly Cox, has a particularly nice page of remembrance.
(Image source: Kelly L. Cox; Tahoe Daily Tribune)

The five-mile portion of Route 267 from PLA 4.898 to the end of Route 267 at PLA 9.898 in the County of Placer, is named the "Senator Paul J. Lunardi Memorial Highway". It was named in memory of Paul J. Lunardi, who was born in September 1921, in Roseville, California, and lived his entire life at the family home on Earl Avenue. Upon his graduation from Roseville High School, Lunardi enlisted in the United States Coast Guard during World War II. After the war, he was elected to the Roseville City Council in 1950 and 1954, winning the mayoral seat in the latter year. During his tenure on the city council, Lunardi was instrumental in the adoption of a city charter for the council-manager form of government and successfully established a community hospital, developed a municipal fire department, established an updated street lighting system, obtained central valley federal power for the city, and expanded sewage, water, and electric distribution systems. His outstanding record of achievement earned Lunardi a highly coveted “Outstanding Young Men of California” award presented by the State Junior Chamber of Commerce on January 8, 1955. Lunardi was elected to the State Assembly in 1958, representing the 6th Assembly District, which spanned 11 mountain counties. He served in the Assembly until 1963 when he was elected to the State Senate to represent the 7th Senate District, which included the Counties of Sierra, Nevada, and Placer. He retired in 1966 due to redistricting. One of Senator Lunardi’s proudest accomplishments was his legislation designating the ghost town of Bodie as a State Historic Park. Bodie is now listed on the National Register of Historic Places and is one of the best preserved and most visited (200,000 people a year) ghost towns in the nation. Senator Lunardi introduced the first bill in the state’s history to assess farmland at a lower tax rate. The bill later passed with the help of Assembly Member John Williamson and is now known as the Williamson Act. Skiers and mountain residents still benefit from one of Senator Lunardi’s major legislative accomplishments that designated the “Truckee shortcut” as Route 267, that links the City of Truckee to Kings Beach. Prior to 1965, the road was regularly closed by snow in the winter. Senator Lunardi’s legislation enabled the road to remain open year-round, worth millions of dollars to the area’s tourism and ski industries, and allowed for the development of Northstar Ski Resort. Senator Lunardi was honored in 2008 when his hometown of Roseville dedicated a park in his name, to honor his civic achievements and his dedication to the community where he lived his entire life. Senator Lunardi passed away peacefully on January 11, 2013, at 91 years of age and was laid to rest in his beloved Roseville, California. Named by Senate Concurrent Resolution (SCR) 23, Res. Chapter 141, Statutes of 2015, on August 26, 2015.
(Image source: Gaines Gazette; Sierra Sun)

The 1963 map also shows LRN 267 as applying to the portion of Route 138 between I-5 and Route 14. That segment was LRN 59. Evidently, the straight-line segment would have become LRN 267 upon the completion of a new routing for LRN 59 to the S directly into Palmdale.