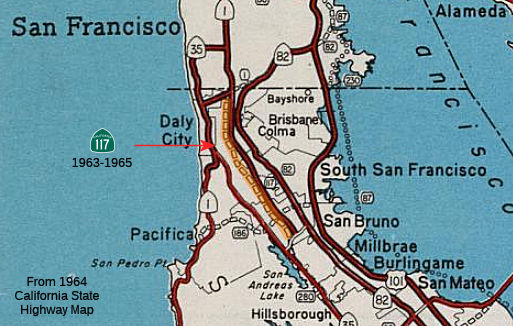 In 1963, Route 117 was defined as the route ran from "Crystal Springs Road in the City of San Bruno northerly to Route 280 in Daly City." Its definition also noted that " Joint Highway District No. 10 is dissolved in accordance with the provisions of Chapter 20 of Part 1 of Division 16 of the Streets and Highways Code, and all property, assets, and liabilities of said district are the property of the State."

In 1965, that definition of Route 117 was deleted by Chapter 1372. This included the portion of Junipero Serra Boulevard south of Serramonte Boulevard, which did not have the parallel I-280 until the early 1970s. This segment is built to expressway standards, complete with CalTrans green signs at intersections, jersey barriers, and even a CalTrans maintenance station at Junipero Serra and Westborough. This may also have been what is the current routing of I-280, as in 1967 some maps show Route 280 as continuing along Skyline to Sneath in San Bruno before cutting up to S San Francisco and Daly City.

A document on the Millbrae Spur Property noted that:

In early 1955 the proposed route of the Junipero Serra Highway was reoriented in San Bruno to go to Skyline Boulevard and south to Ralston Avenue in Belmont. This new route was located considerable west of the original route; it no longer divided the Peninsula cities. In the 1960s the route was again modified, and the proposed Junipero Serra Highway was absorbed into the Interstate Highway System, which created I-280 connecting San Francisco and San Jose.

Chris Sampang has surmised this might confirm that former Route 117 is leftover right of way. Scott Parker (SParker) confirmed that on AAroads, noting:
(Source: Scott Parker on AARoads, "Re: junipero serra over / under in Daly City", 1/5/2019)

As I-280 functionally supplanted that section of Junipero Serra Blvd., it was likely that the present configuration was made to enhance the local business prospects of the immediate area; it moved from side to side to connect existing commercial facilities.  FYI, the original supplanted segment of Serra was the original (1964) Route 117; that designation was deleted ca. 1970 after I-280 was opened to traffic. 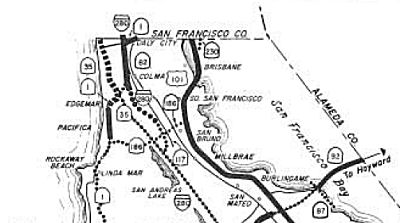 ChrisSampang noted that at Seton Hospital there is an overhead picture of Daly City from 1955 that shows two grade separations on the Junipero Serra Boulevard corridor (Route 117), which correspond to current exits on the Serra Freeway: Alemany Boulevard/John Daly Boulevard and Washington Street. There are some intriguing difference. 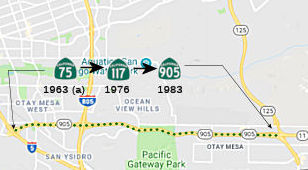 In 1972, Chapter 1216 recreated Route 117 as "the international boundary near Borderfield northeasterly to Route 5."

The post-1972 routing was new, although the portion added from Route 75 was approximately LRN 281, although its proposed routing was slighly N of the current Route 905.

In 1933, Chapter 767 added the route from "Monterey to [LRN 2] near Salinas" to the highway system. In 1935, this was codified as LRN 117 in the highway code with that definition, which remained unchanged until the 1963 renumbering. The route ran from Monterey to US 101 near Salinas, and is present-day Route 68.