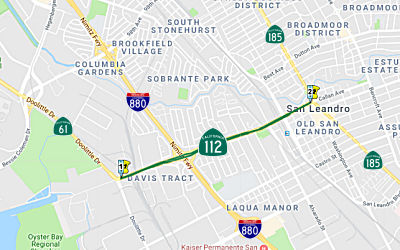 This route is signed as Route 61 via Davis Street. According to Chris Sampang, Route 112 EB signage is starting to appear.

In May 2005, the CTC considered relinquishment of a portion of Route 112 property, specifically right of way in the City of San Leandro, at Carden Street, consisting of reconstructed and relocated city streets and service roads.

Bridge 33-082, at Davis Street in San Leandro in Alameda county, is named the "Jack D. Maltester/Mario Polvorosa Bridge". It was named by Senate Concurrent Resolution 52, Chapt. 10 in 1978. Mayor Jack D. Maltester and Vice Mayor Mario Polvorosa worked tirelessly for the construction in 1978 of the grade separation structure on Davis Street at Warden Avenue in the City of San Leandro. Jack Maltester transformed the face of San Leandro during 20 years as mayor from 1958 to 1978. Even as a private citizen, his influence remained great beyond the city in which he was born in 1913.  Maltester was a behind-the-scenes negotiator, adviser and deal maker. He cultivated political talent, represented private real estate developers, served on the Oakland-Alameda County Coliseum board, and was a member of civic and regional committees. A printer by trade, Maltester served an interim term on the council in the late 1940s, after losing council races in 1946 and 1948. He won election to the council in 1956, was selected by the council as mayor two years later, and became the city’s first directly elected chief executive in 1962. He was re-elected in 1966, 1970 and 1974, but a voter-approved two-term limit — not surprisingly opposed by Maltester — ended his tenure in 1978. While San Leandro’s chief executive, Maltester was president of both the U.S. Conference of Mayors and the League of California Cities. Presidents Johnson, Nixon and Ford appointed him to a federal commission five times. As for Mario Polvorosa: Owned Mario's shoe shine, and a Yearly Christmas tree lot on Davis St. He was a long time city councilman and vice mayor in 1976.
(Image sources: Facebook; Ingress-Intel; East Bay Times)

In April 1958, it appears that the designation I-112 was proposed for the route that is now I-205. This was part of the first attempt to assign 3-digit interstates n California. The number was rejected by AASHTO.