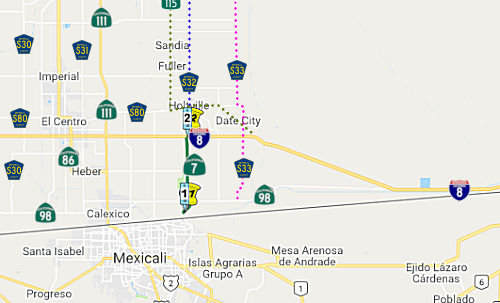 From the northerly boundary of the Federal Port of Entry near Calexico to Route 8 near El Centro.

In 1963, Route 7 was defined as "from Route 11 [Present-Day Route 110] in San Pedro to Route 210 in Pasadena via Long Beach and including a bridge, with at least four lanes, from San Pedro at or near Boschke Slough to Terminal Island."

In 1965 the southern end was truncated by Chapter 1372, transferring the San Pedro portion and bridge to Route 47. This left the route definition as "from Route 1 to Route 210 in Pasadena."

In 1984, this route was transferred to Route 710 as it was approved as non-chargable interstate.

In 1990, the current incarnation of Route 7 was defined as "from a new International Border crossing near Calexico to Route 8 near El Centro." (Chapter 1187)

In 1994, the definition was changed to "from the northerly boundary of the Federal Port of Entry near Calexico to Route 8 near El Centro." (Chapter 1220). Note that the route appears to continue N of Route 8 as Imperial County Sign Route S32 to Route 78, although County Sign Route S32 was defined well before Route 7. Route 7 becomes Orchard Road. N of I-8. 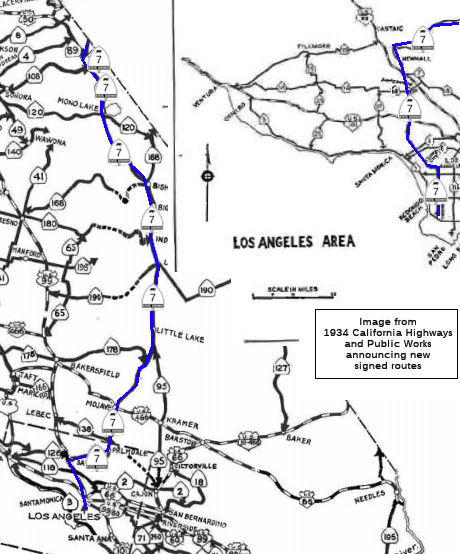 In 1934, Route 7 was signed along the route from Jct. Route 3 (US 101A, later Route 1) at Torrance to the California-Nevada state line north of Coleville, via Mojave, and from the Nevada-California State Line near Reno Jct. to the California-Oregon State Line at New Pine Creek via Alturas. Starting in 1935, the portion of this route N of former state signed Route 95 at the Inyo-Kern County Line was renumbered as US 395. In that routing, it began at the Oregon border, and consisted of the following segments:

A controlled access highway routing has been adopted from Route 98 (~ 007 IMP 1.164) to I-8 (~ 007 IMP 6.695), per the August 2000 CTC Agenda. It was under construction as of October 2002, according to Don Hagstrom. It was open as of March 2012, giving trucks a full expressway route to the interstate, and allowing then to avoid the narrow 2-lane Route 98. A future extension of Route 7 north may be constructed as a routing of a new Route 115 expressway as well, although this is far off.

In September 2009, the CTC relinquished right of way in the county of Imperial along Route 7 from Heber Road to Hunt Road (11-Imp-7-PM 3.7/6.3), consisting of relocated or reconstructed county roads, and frontage roads. This is likely roadway bypassed or modified by the expressway construction.

In September 2019, it was reported that there is an effort underway to remove trucks from Orchard Road (County Sign Route S32) N of I-8. As part of this effort, Caltrans proposes to install signage along Route 7 advising drivers of large trucks going north to avoid Orchard Road and use alternate routes. Route 7 becomes Orchard at Interstate 8 south of Holtville. As part of a mid-range proposal, Caltrans is looking to develop a package of guidance signs to provide directional information for trucks as a part of its Traffic Investigative Report. The city of Holtville will eventually need to cooperate with the removal of truck-route designations at Orchard and Fourth Street, the north terminus of Orchard. Caltrans is looking at a number of guidance signs, the first at the Commercial Vehicle Enforcement Facility at the East Port of Entry. There would be another sign on Route 7, midway up, for further notification to truck drivers, and, just south of I-8 on Route 7, a different sign that indicates the truck route ends in a half mile. Wording on the signs would read, “Trucks to SR 115 use I-8 West to SR 111 North.” This would direct trucks northbound from Mexico to Los Angeles. Also, signs would guide trucks southbound. The southbound sign would be at the intersection of Route 78 and Route 111 in Brawley. The sign would read, “Trucks to Route 7 Use Route 111 South to I-8 East.” A third sign near Holtville for trucks southbound on Route 115 would read, “Trucks to Route 7 Use Route 115 South to I-8 West.”
(Source: Holtville Tribune, 9/12/2019)

Note: Apparently, a 2007 episode of the TV program "24" featured a Route 7 that ran from the central part of Los Angeles (Florence and something) to Newhall. Although Pre-1964 Route 7 ran to Newhall, it was only from the top of the San Fernando Valley (Sepulveda Blvd), not from Central Los Angeles.

The portions of 1934 Route 7 that correspond to US 6 and present day Route 14 were part of the Midland Trail.

In November 1957, the California Department of Highways proposed the designation I-7 for what is now I-505. This was part of an approach to number current I-5 as I-11, and use the single odd digits for what are now loop routes in the San Francisco Bay and Los Angeles areas.

The route that would become LRN 7 was defined in the 1909 first bond act, running from Tehama Junction to Benicia.

In 1931, it was extended by the addition of the secondary routing from [LRN 14] near Crockett to American Canyon Route near Vallejo. The rationale was that the route would provide a connection from the proposed American Canyon Route to [LRN 14] near Crockett. In doing so, it would provide a complete through road for trafficc from the inland valleys to the bay area.

It was then quickly amended by Chapter 274 to the simpler:

[LRN 14] near Crockett to Red Bluff

This amendment closed the gap between Vallejo and Red Buff, and included the [2] portion of the route that had been part of LRN 104. However, that portion was not removed until 1939.

LRN 7 continued N cosigned as US99W/Alt US 40 until Woodland. This is present-day Route 113.

LRN 7 then jogged W briefly signed as US99W/Route 16, and then continued N signed as US99W (later the approximate routing of I-5) until the junction with US99E (LRN 3) near Red Bluff.