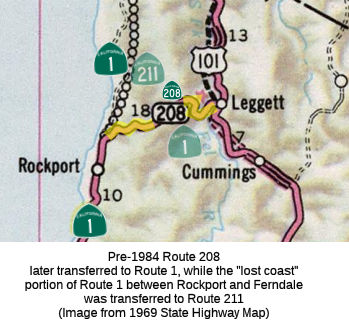 In 1984, Chapter 409 transferred this routing to Route 1. This was part of the whole creation of the "Lost Coast", where the unconstructed Route 1 between Leggett and Ferndale was renumbered as Route 211, and Route 208 became Route 1, reflecting (a) the fact that construction of a major state highway through the pristine "Lost Coast" was likely never to happen, and (b) as it would never happen, it was important that Route 1 returned to US 101 at its northern end..

This was an extension of LRN 56 defined in 1951. It was signed as Route 1, but there was also a proposed Route 1 that ran between Leggett and Ferndale along the coast (never constructed).

In 1921, Chapter 841 authorized the Department of Engineering “...to make an investigation and submit a preliminary report upon a proposed state road with the necessary bridges connecting the city of Vallejo with a point on the state highway near Sears Point in Sonoma County... Beginning at the intersection of Butte and Tennessee Streets in Vallejo, and running thence N-ly along Wilson Avenue to the limits of said city, thence continuing along the paved county roads through the Bay terrace district to a point in the vicinity of the lands formerly owned by Vallejo Brick and Tile Company, thence leaving the mainland and running W-ly across the Napa river to island number one: situated on the immediate W bank of the Napa river and immediately N of Marc island and adjacent to the E short of San Pablo bay; thence NW-ly along said San Pablo shore levee to a point near the mouth of Sonoma creek and running W-ly across Tubbs island and across Tolay creek to a junction with the state highway in the vicinity of Sears point.” It appears that this highway was not added to the state highway system at this time.

This routing remained unchanged until the 1963 renumbering., It ran from Route 37 near Sears Point to US 40 (present-day I-80) near Lake Chabot. This is former Route 48; present-day Route 37.