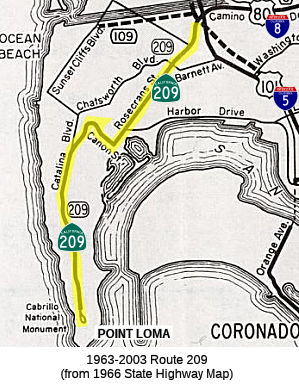 At one time, the segment to Barnett Street was proposed as a freeway.

There is a debate on whether US 80 continued W from San Diego to Point Loma (note that this is not the current I-8 routing W of I-5 to Ocean Beach). As originally defined, US 80 terminated in "San Diego" via LRN 12 and the Old Spanish Trail. The termination point was imprecise, and was generally assumed to be at US 101. At the time of definition, this was sufficient as the state could not maintain highways within large urban areas. The 1930 state highway map inferred that the route terminated in downtown San Diego at US 101/Broadway via 4th Street. In 1931, San Diego County was advocating for US 80 to terminate in Point Loma (making the highway truly coast to coast). In 1933, when the state could take over highways in large cities, LRN 12 was extended to Point Loma: "Atlantic Street, San Diego to old Spanish Lighthouse, Point Loma". On July 16, 1934, the modernized highway carrying LRN 12 to Point Loma was dedicated and ended at the Old Spanish Lighthouse parking area. This segment was larger Route 209. However, although some commercial maps showed US 80 as extended to Point Loma, no state highway maps included that extension. Throughout the 1930s and 1940s, according to state highway maps, US 80 terminated at US 101. The first reference of US 80 terminating at Point Loma was in the July/August 1955 California Highways & Public Works, which refers to Rosecrans Boulevard/LRN 12 between Lytton Street and Pacific Highway as part of US 80. Additionally, the November/December 1958 California Highways & Public Works specifically states US 80 ended at the Old Spanish Lighthouse at Point Loma.  However, there appears to be no formal request of AASHO (although it is likely that "San Diego" was close enough for government work). Muddying the waters is the fact that the May/June 1961 California Highways & Public Works describes the freeway corridor of US 80 as ending at US 101.  Additionally, when Route 209 was created in 1964 for the portion of LRN 12 W of US 101, the 1964 Division of Highways Map depicted Route 209 as ending at Point Loma, but the map does not clearly convey the status of US 80 beyond US 101 (the 1964 map still showed the US highways).  In 1966, AASHO approved a request by the DOH to truncate US 80 to the Arizona State Line.  The DOH Map submitted with the request depicted US 80 terminating at Point Loma.  The specific status remains unclear.
(Source: Gribblenation Blog (Tom Fearer), "US Route 80 to Point Loma?", July 2022)

The Gate at the Fort Rosecrans Military Reservation is open daily from 8:00am to 5:15pm. As signs get replaced on I-5, references to Route 209 are disappearing; however, Route 209 is still well marked upon Rosecrans.

In 1939, Chapter 794 added the route “[LRN 3] near Station 398, according to the survey of said [LRN 3], Section B, to Shasta Summit near Summit City”. No route number was assigned. This route was added as an urgency measure, in order to accomodate heavy traffic from US 99 to and from Shasta Dam.

This is present-day Route 151.