From Route 71 to Route 10 near the City of Upland.

With respect to offramps in Upland, Ali Pezeshkpour writes:

Upland chose to place on and off-ramps for the new freeway at Mountain Avenue and Campus Avenue (Mountain Ave for access to Mt. Baldy, Campus for access to the 1,000 new homes and mall in being built in Upland). Then, around 1998-99, Upland chose to relocate Campus Ave. and create a new alignment about .5 miles to the east, which is the distance between the major north-south arterials of the city of Upland. This means that Mtn. Ave and Euclid Ave are 1 mile apart, and Euclid and the new Campus are 1 mile apart. Thus, the possibilty of adding ramps to Euclid in the future would be left open. Also, in an unusual note, posts were placed along Euclid to prepare the street for new shields and signs for freeway entrances, but were later removed. Sound-wall construction had gaps in the walls around Euclid left until about 6 months ago when they were filled in, but the recently constructed power lines paralleling the freeway and crossing Euclid were done in a way that they would go around any ramps that could be built. The retaining wall around Euclid was also constructed in an odd manor, as if to suggest that they could be removed when the time came to place ramps at Euclid. Grading was also done on curbs where ramps could be added about 6 months ago.

In 2021, AB 744, Chapter 198, 9/22/2021, changed the terminus to “…Route 10 near the city of Upland.” and added section (c). Notable in section (c) is the authorization to “relinquish to the City of Ontario all or a portion of Route 83 within its jurisdiction, if the department and the city enter into an agreement providing for that relinquishment.” Originally they intended to change the definition to "…from Route 71 to Merrill Avenue and includes the southbound portion between Merrill Avenue and Riverside Drive within the City of Chino", but that change was amended away. The means that the current routing could (and probably will) be relinquished to the city, but a new routing could (but is unlikely to) be defined until the legislative definition is changed. The Senate analysis noted: “This part of State Route 83 passes through a commercial area with a large center median. The City wants to install storm drains, invest in median beautification, improve sidewalks, create active transportation paths, and create more transit oriented development.” and the author noted “The City of Ontario has undergone significant changes as it emerges to be a regional transit hub and sustainable live-work city. The State should support the City as it continues its expansive redevelopment and new investment in building a strong central city core.” 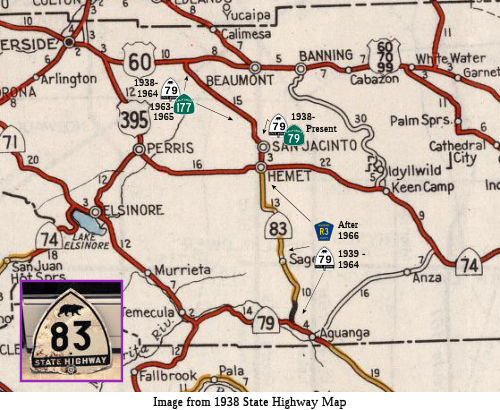 So why was Route 83 renumbered into Route 79, vs. staying Route 83. According to Scott Parker on AARoads: The Route 79-for-Route 83 switch happened only a few years after US 395 was commissioned in CA. Its original San Diego-Riverside path via Vista, Fallbrook, and Lake Elsinore was indeed convoluted. Much of that, part of LRN 77, was originally slated to be Route 71 prior to US 395 entering the picture. But once US 395 happened, it was apparently decided to make Route 79 an eastern parallel alternative to that route, so it subsumed old Route 83, with Route 71 serving as a northern "feeder" for Route 79, funneling traffic in from east of L.A. all the way to the Inland Empire. Temecula was nothing more than a rural junction point until substantial development began in the mid-60's; the Division of Highways thought it more important to locate Hemet, at the time the largest town southeast of Riverside, along this alternate N-S corridor than to serve the smaller town also served by US 395 and Route 71.
(Source: Scott Parker on AARoads, "Re: CA 79", 10/30/2019)

There may be some plans to upgrade a portion of this route. According to "LA Freeway Enthusiest" in October 2002, there was an article in the Inland Valley Daily Bulletin about a plan to upgrade Route 83 (Euclid Ave) from Route 71 in Frontera to Route 60 in Ontario (~ SBD R0.059 to SBD 7.04); the plan called for a widening of the narrow section by the Chino state prison and improvements within the Ontario section south of Route 60.

In June 2008, the CTC relinquished right of way in the city of Upland, under terms and conditions as stated in the cooperative agreement, dated October 17, 2007, determined to be in the best interest of the State. Authorized by Chapter 507, Statutes of 2006, which amended Section 383 of the Streets and Highways Code.

The northbound and southbound sections of Route 83 in Chino between the Kimball Avenue and Route 60 exits (~ SBD 2.921 to SBD 7.04) are officially named the "Correctional Officer Jesus "Jesse" Sanchez Memorial Highway". This segment was named in memory of Correctional Officer Jesus "Jesse" Sanchez, who, in 1972 at 24 years of age, became a permanent correctional officer at the California Institution for Men. Officer Sanchez had worked his way through the ranks for such a promotion as part of the federal government's new Work Incentive Program. Previously, Officer Sanchez had graduated from the Correctional Officers School in Soledad with good grades and was an excellent employee. Officer Sanchez was ambitious and always asked what else he could do to be a better officer and colleague. Upon receiving word of his promotion, Officer Sanchez moved his family to Pomona, assured of his future. Tragically and shortly thereafter, Officer Sanchez was gunned down during an ambush while escorting a prisoner to San Bernardino County Court, along with his partner George F. Fitzgerald, about a mile from Euclid Avenue on Edison Street in Chino. Named by Senate Concurrent Resolution (SCR) 83, Resolution Chapter 122, on 9/7/2010.
(Image source: Officer Down Memorial Page)

This definition remained unchanged until the 1963 renumbering. It was signed as follows: