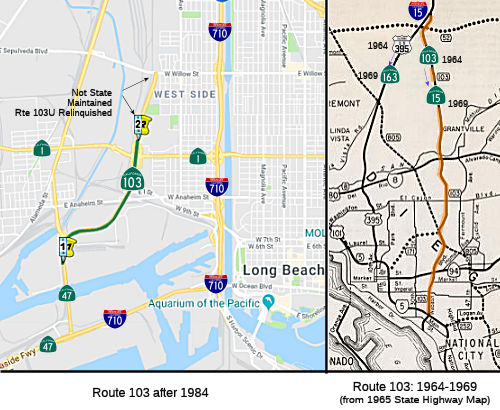 FromRoute 47 in Los Angeles to Route 1.

In 1963, Route 103 was defined as the route from Route 5 to Route 395 near United States Naval Air Station, Miramar. This route was along Murphy Canyon Road, 40th Street, and Wabash Avenue. In 1969, Chapter 292 transferred this routing to Route 15.

In 1984, Chapter 409 redefined the route as "Route 47 in Long Beach to Route 1." This was a segment dropped from Route 47 in 1982. This route was signed as Route 47 after 1964, though the alignment of Route 47 actually splits off about ¼ mi north of the drawbridge from Terminal Island. It respresents the original Terminal Island Freeway constructed by the City of LOng Beach.

There were later proposals that extended the Terminal Island Freeway as Route 47 north (i.e., the "Industrial Freeway"—see Route 47 for more information) from its end at Willow Street rather than north of the drawbridge. Route 47 was then switched back to Henry Ford Avenue and Alameda Street in 1982 and the remainder became Route 103 in 1984. The portion of freeway from Route 1 to Willow Street in Long Beach (Sepulveda Blvd on the City of Los Angeles side of the border) is not state highway anymore (technically, it is Route 103U, where U means "unrelinquished") .

This was the routing that would eventually be Route 15. It was LRN 283, and was defined as part of the state highway system by 1959.

In March 2012, it was reported that the Long Beach City Council voted to seek a grant that would study a proposal to remove the Terminal Island Freeway. The plans are still very preliminary. The goal of local advocates is to turn the freeway into a local street and a large park. The council vote means the city will officially pursue a $300,000 Caltrans grant under the Transportation Planning Grant Program. The section of freeway targeted for removal is on city-owned land, so if the freeway is removed, according to the Long Beach Post, "the surplus land size falls in the arena of some 25-acres that could be used to create a mile-long greenbelt, similar to the Wilmington Park Yards proposal."

In March 2013, the Long Beach City Council tried again. They voted unanimously to (once again) approved a motion to pursue a grant in order to further a study on the removal of the northern portion of the Terminal Island Freeway (Route 103) that sits above Pacific Coast Highway in West Long Beach. The Terminal Island Freeway has been at the center of a proposed restructuring since 2010, when community leaders pointed out a simple thing: the existing northern length of the freeway, following the development of the 20-mile long Alameda Corridor and the still-underway modernization of the Intermodal Container Transfer Facility (ICTF) by Union Pacific Railroad, is redundant. Not only do shipping companies use it less and less, the traffic itself matches those of 4th Street along Retro Row (some 13,700 AADT). And if plans for ICTF follow through, you can drop that down to 8,700 AADT–less than the traffic 3rd Street receives in the quiet neighborhood of Alamitos Beach.
(Source: LA Streets Blog)

In July 2014, it was reported that, funded by a grant from the California Department of Transportation, Long Beach released an RFP for conceptual and design services for a plan to transform the Terminal Island Freeway into a "regional serving greenbelt and local serving road." 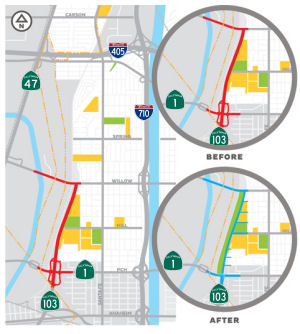 In December 2014, it was reported that a contractor has been selected to remove the Route 103 freeway: Meléndrez, the same company responsible for the MyFigueroa project in LA and the Bixby Park re-design. The project is simple: the existing northern length of the freeway, following the development of the 20-mile long Alameda Corridor and the still-underway modernization of the Intermodal Container Transfer Facility (ICTF) by Union Pacific Railroad, is redundant. Not only do shipping companies use it less and less, the traffic itself matches those of 4th Street along Retro Row (some 13,700 AADT). And if plans for ICTF follow through, that can drop that down to 8,700 AADT–less than the traffic 3rd Street receives in the quiet neighborhood of Alamitos Beach. According to the bid, the “TI Freeway Transition Plan will define the community’s vision for replacing an underutilized freeway to mitigate pollution impacts to address long-standing community health concern” while giving “qualified candidates the opportunity to produce a plan for one of the most heavily impacted communities in Southern California.” What Meléndrez proposed is using the TI project as a tie to the larger West Long Beach Livability Implementation Plan, a plan dedicated to prioritize various proposed planning projects based on their ability to increase overall livability of the West Long Beach community. It combines a variety of key planning elements—Port of Long Beach Green Port Policy, Mobility Element, Community Livability Plan: I-710 Corridor Neighborhoods, Long Beach RiverLink, The Yards Westside Plan, Open Space and Recreation Element and the 2013-2121 Housing Element—to assess how to improve the Westside as a whole through the TI project.
(Source: LongBeachIze, 11/26/2014)

In October 2015, it was reported that the City of Long Beach has disclosed conceptual plans to decommission Route 103 that have been in development for two years. It was the first time the plans, developed from a series of community meetings, have been shown publicly. The city plans to decommission one side of the freeway, leaving a reduced set of lanes to serve as a local access road. There will be green park space, a small section of wetland, pedestrian bridges and walking trails, among other features. Residents should expect these plans to change as the project progresses; an environmental review or a traffic study has not yet been performed. The Green Terminal Island Freeway Transition Plan, as it is known in project parlance, began in October 2013, when Caltrans awarded Long Beach a $225,000 environmental justice grant. The project is considered one of Southern California’s largest freeway-removal projects.
(Source: Press-Telegram, 10/24/2015)

In December 2015, it was reported that the Long Beach City Council voted unanimously in favor of further traffic and environmental impact studies. After nearly two hours of debate between community members and activists pushing for a more green entity to be installed in the city and an “unprecedented” coalition of labor unions and port businesses voicing opposition to the removal of vital infrastructure for port-bound goods, the council decided that more information regarding possible impacts on traffic, health and the economy were needed before they could take a side in the matter. The biggest causes for concern, voiced by both sides of the issue and the city council, was the lack of in-depth studies, like how traffic would be impacted, and the absence of an environmental impact report. Because the plan is still in its conceptual phase, it did not require those, but those studies will be required prior to any kind of vote to approve the project.
(Source: Long Beach Post, 12/2/2015)

This route is named the "Terminal Island Freeway". The first segment opened in 1948. Terminal Island was originally named "Isla Raza de Buena Gente" (Island of the Race of Good People). Early in the American era, the island became known as Rattlesnake Island. In 1911, after the Los Angeles Terminal Railway had built a line from the city to the island, it assumed its present name.

In 1933, Chapter 767 added the route from "Calistoga to [LRN 1] near Geyserville" to the highway system. In 1935, this was codified as LRN 103 in the highway code with the following definition:

Calistoga to [LRN 1] near Geyserville