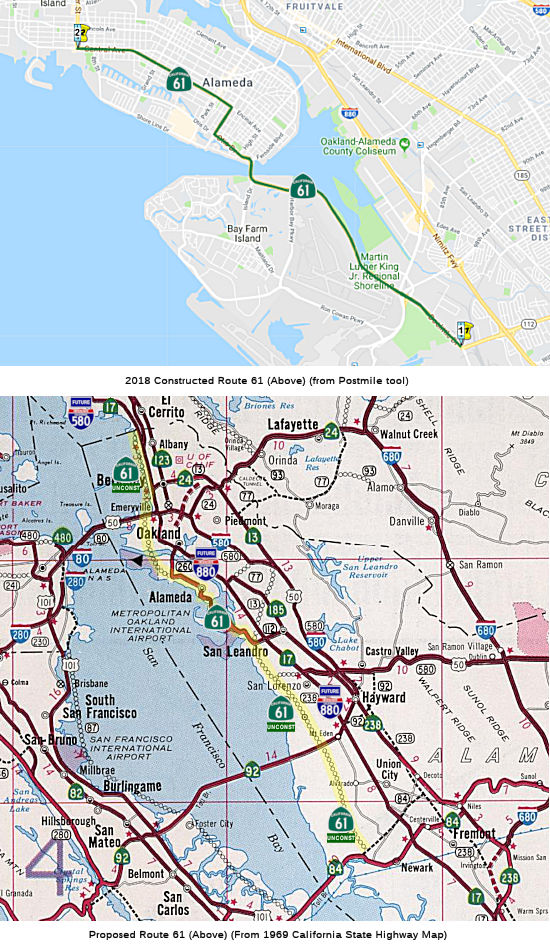 From Route 84 near Newark to Route 580 near Albany via the vicinity of San Leandro and Oakland International Airport and via Alameda.

In 1963, this route was defined as "(a) Route 84 near Newark to Route 17 in Oakland near Seventh and Harrison Streets via the vicinity of San Leandro and Oakland International Airport and via Alameda. (b) Route 17 near West Grand Avenue in Oakland to Route 17 near Albany."

361.1 Upon the completion of the additional subterranian tube between the cities of Oakland and Alameda, in the vicinity of Webster Street, to be used in connection with the Posey Tube, both of which tubes are included in the description of Route 61, the department may by executive order, rule or regulation, designate both of said tubes and the approaches leading to or from the nearest state highway or city street as one-way highways, and thereafter restrict said tubes and approaches to one-way traffic proceedings in opposite directions as to each other. Upon the placing of signs notifying the public of such restrictions, any person who willfully fails to observe such sign is guilty of a misdemeanor.

361.2 Because of the statewide interest in navigation, the state will hold and save the United States of America free and harmless from liability for damages to the parallel tubes between the Cities of Oakland and Alameda included in the description of Route 61 due to the initial dredging work and subsequent maintenance dredging in an area within 50 feet of said tubes in connection with the deepening of the Oakland Estuary by the Corps of Engineerings of the United States Army and the Director of Finance shall execute an agreement so to do with the proper representatives of the United States of America.

Route 61 would have started near Golden Gate Fields in Berkeley and traveled parallel to I-80, filling in the Bay, then crossing over the Bay Bridge Toll Plaza. It would then touch down in Alameda, cross Alameda and then get down into San Leandro, where it would be connected to a new Y-shaped Bay Bridge. That Y-shaped bridge would have hooked up with Route 24 along the way and ended near Hunter's Point -- where it "could" have connected to a network of urban freeways that criss-crossed San Francisco. The concrete stubs that were part of the plan are visible near the Cesar Chavez exit on I-280.
(Source: KGO 7, 11/13/2018)

Route 61 was not signed as part of the 1934 state route signage.

Scott Parker on AAroads related the following story regarding the signage of what would become Route 61:
(Source: Sparker on AAroads, "Re: CA 92", 2/15/2019)

The original path of Pre-1964 Route 17 pre-Nimitz Freeway was up LRN 69, which passed through the west side of Hayward on Hesperian Blvd., turned left (west) on Lewelling Blvd. a little under a mile to Washington Street, where it turned right/north to another regional multi-street intersection in downtown San Leandro. Pre-1964 Route 17 then segued north onto East 14th Street (the northern extension of Mission) into downtown Oakland; also, Davis St. (current Route 112) went west from that intersection to Doolittle Drive, then north to Alameda. That too remained without state route signage until after '64 -- although Caltrans lore, as related to me by my cousin who retired from the agency back in the '90's, has it that the Alameda "loop", now mostly Route 61, was, just prior to WWII, slated to receive signage as Pre-1964 Route 13 (grid-appropriate under the old numbering system) -- but the city of Alameda balked at that "unlucky" number, so the state-maintained route through that city remained unsigned for 20+ more years.

The San Leandro Bridge (ALA 18.55, Bridge 33 0086), also known as the Bay Farm Island Bridge, is one of two drawbridges owned by Caltrans. It serves as part of Route 61 connecting to the city of Alameda, and was built by Caltrans in 1952 but is maintained by the Alameda County Public Works Agency. The same arrangement exists for a pedestrian-only movable bridge built alongside the main Bay Farm bridge in 1995, the only one of its kind in the country. It opens and closes in tandem with the vehicle bridge. It is a 125 foot single leaf bascule bridge, spanning the San Leandro Bay inlet to the Oakland Estuary at Otis Drive, and is similar to the Fruitvale Avenue Bridge. The Oakland Estuary is a navigable water way with access to the San Francisco Bay. A bascule bridge is a a draw bridge that is counter-weighted so that it may be raised or lowered easily. The bridge, owned by the State, was built by contractors Duncason-Harleson Company and Stolte Inc in 1952. It is operated by the Alameda County Public Works Agency by contract with the State of California. The Public Works Agency provides preventive maintenance to the bridge, but large scale repairs are done by the California Department of Transportation, District 4.
(Source: Summer 2019 Mile Marker; Alameda County Public Works Agency)

Technically, the segment from Route 260 to I-580 is unconstructed, and that the SHC does not allow this to be constructed as a freeway N of Hegenberger Road. However, Route 260 (the Posey Tube) is signed in its entirety (from Route 61 to I-880) as Route 61. For information on the portion formerly on Webster Street and the Posey Tubes, see Route 260.

This is "Webster" Street and "Doolittle" Drive. Other names are Central Avenue, Encinal Avenue, Broadway, and Otis Drive.

The route that became LRN 61 was first defined, to some extent, in 1915, when Chapter 704 defined the Pasadena State Highway: "to connect the La Cañada valley with the Antelope Valley...starting 2 mi NE of La Cañada thence following N and NW-ly the Arroyo Seco to a point E of Hoyt Ranch; thence NE-ly following Tujunga Cyn and Mill Creek to Tie Cyn; thence NW-ly by way of Kennedy Springs to Vincent.". However, the act only funded locating and surveying the route.

In 1919, the Third Bond Act allocated funds for a route from La Cañada to Mt. Wilson Road via Arroyo Seco.

In 1931, the route was extended by Chapter 82 from Red Box Divide to Pine Flats ([LRN 61] to [LRN 62]). The Red Box Divide is now the Red Box Campground at Forest Route 2N24 (Mt Wilson Red Box Road). LRN 62 was signed as Route 39. The rationale for the route addition was to support the demand for recreational highways near Los Angeles. This demand resulted in phenomenal use of road facilities that provide such pleasure, and large local expenditures were being made by the county annual to extend the ways into the mountains. The extension qualified as a road that will carry traffic as relief for congested state roads of like nature.

This route ran along Verdugo Road between San Fernando Road and Foothill and was signed as Route 2. North from Foothill, it was Angeles Crest Highway over the mountain to meet up with Route 138, still signed as Route 2.