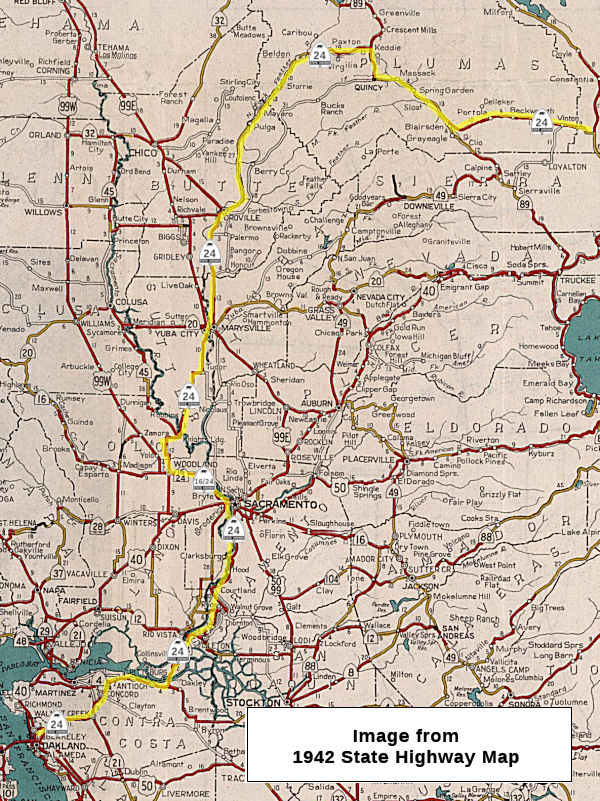 Route 24 started at US 40 (now I-80) at the Oakland City Hall at 14th and San Pablo. It then ran along Broadway to College, then along College to Claremont Ave. Along Claremont, it entered Berkeley. It jogged briefly along Ashby Avenue (present-day Route 13, LRN 206, defined in 1935) to Tunnel Road, continuing into Contra Costa County. The route was LRN 75.
(Source: Old Oakland Maps, 1936)

From Route 4 (Route 24's present-day terminus), it continued cosigned with Route 4 between from near Concord to near Antioch (this was LRN 75, defined in 1931).

Route 24 then ran N to Sacramento, following the route of present-day Route 160, entering along Freeport Blvd. This was LRN 11, defined in 1933. It originally ran N on Freeport to Broadway.

In Woodland, Route 24 diverged from Route 16 and continued N to Yuba City/Marysville along LRN 87. It was cosigned with US 40A, and this segment is now part of Route 113.

Over on AAroads, Scott Parker (Sparker) noted the following about the I-Street routing: The original LRN 232 (after 1959 signed as Route 24) diverged from LRN 50/Route 16 at the intersection of the I Street extension bridge immediately east of the Sacramento River swing-span (shared with UP/former SP tracks on the lower/ground level deck) and Jiboom Street (both are elevated over the RR tracks). It headed north on Jiboom over a through-truss bridge crossing the American River; the street ended at Garden Highway -- atop the river levee --, at which point LRN 232/Route 24 turned west. About a mile west of there, the state highway diverged from Garden Highway along a broad arc descending north from the levee onto El Centro Avenue, which it utilized north into Sutter County. LRN 232 and Route 24 terminated at LRN 3/US 99E at a diamond interchange in Olivehurst.

In November 2022, it was reported that the plan to turn the top level of the I Street Bridge into a pedestrian walkway and bike lane over the Sacramento River was progressing. In Fall 2022, project planners filed financial documents, and in late October 2022 the project was recommended for a $16 million grant through the state’s Active Transportation Program. The current bridge will be superseded by a new bridge between C Street in West Sacramento and the Railyards — a $260 million, 300-foot-long feat of architecture that will replace the I Street Bridge as the route cars take over the river. As for the old bridge, the plan is to use the 111-year-old I Street Bridge for railroad traffic, which runs on the bottom deck of the bridge. As for the top? The city of West Sacramento has spearheaded the plan to repair the bridge’s narrow sidewalk and turn the vehicle lanes into a bicycle track and walkway. The $16 million state grant still has to be formally approved by the state Transportation Commission. The Sacramento Area Council of Governments previously awarded the project $3.6 million to complete the final design and right-of-way phase. The total cost of planning and constructing the project is estimated at $22.6 million. After securing more than $19 million in outside funding, the city will pay the rest. Final planning should be complete and construction could be ready to begin in or before 2026 — but that will largely depend on the timing of the completion of the new Railyards bridge. The plan is to be ready so that as soon as the new bridge is cleared to start taking vehicle traffic, the deck conversion of the old bridge can start. The project should be finished by late 2027 or 2028.
(Source: Sacramento Business News, 11/7/2022)

From Marysville, Route 24 ran through Oroville continuing through to Belden (this was LRN 87 (defined in 1933) between Robbins and Oroville, and LRN 21 (defined in 1909) to Belden, and is present-day Route 70), and then E through Twain, Quincy (running concurrant with Route 89) to Mohawk (this was LRN 21), and then by its lonesome to US 395 near Long Creek (also LRN 21).

According to Chris Sampang and Joel Windmiller, the following are some former routings of US 40A/Route 24 between Woodland and Reno:

Chris also notes that Scott Road north of Reno Junction to just south of Omira was also US 395 pre-expressway. Constantia Road between Omira and Doyle, Doyle Loop in Doyle itself, and Old Highway from Doyle to just west of Lassen County Route A26 also appear to be former alignment (Old Highway passes south of the Doyle State Wildlife Area, but the current US 395 expressway goes right through it between Laver Crossing and Lassen County Sign Route A26.)

The route that was to become LRN 24 was initially defined in the 1909 First Bond Act as running "From [LRN 4] near Lodi to San Andreas". It was affected by the 1911 definition of the "Alpine State Highway" (Chapter 468), which was defined as:

"The certain road commencing at the Calaveras big tree grove located in Calaveras County thence running to Dorrington in said county, thence E-ly following what is known as the Big Tree and Carson Valley Turnpike to Mt. Bullion in Alpine Cty, thence along county road to Markleeville in Alpine Cty, thence along that certain road via Kirkwood, Silver Lake, Pine Grove and Irishtown to Jackson in Amador Cty, including therewith the road from Picketts in Hope Valley connecting with the Lake Tahoe Wagon Road, a state highway, at Osgood's Place in El Dorado Cty, and the road from Mt Bullion via Loupe in Alpine Cty to Junction in Mono County connecting with the Sonora and Mono State Highway is hereby declared and established a state highway and shall be designated and known as "Alpine State Highway""

For LRN 24, this added the segment between Calavas Big Trees and Route 89.

It was further extended in 1924 from Route 49 near Angels Camp to Calaveras Big Trees, by Chapter 375, which stated “That certain county road in Calaveras County commencing at a point where such highway connects with the Mother Lode State Highway at Angels Camp, extending through Vallecita and Murphy and connecting with the Alpine State Highway at Calaveras Big Trees in the national forest is hereby declared to be a state highway...” Legislation in 1933 extended it further, adding a segment from "[LRN 23] near Woodfords to the California-Nevada state line". Thus, by 1935 when the route was codified, the definition was:

In 1957, Chapter 36 deleted the reference to Vallecita. Signage on the route was as follows: