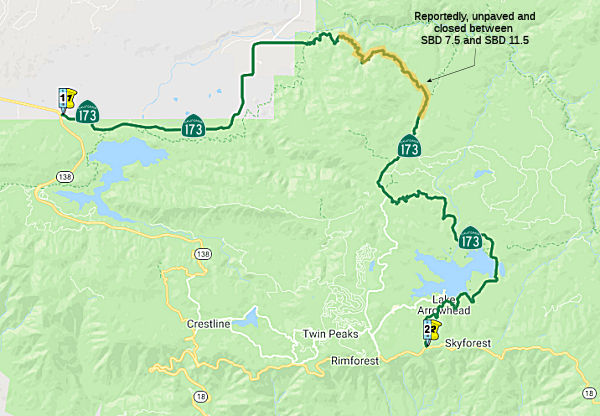 This route is as defined in 1963. Tom Feaerer notes that Route 173 is notable for being a former portion of Route 2 and having the last four miles of dirt State Highway still on the books in California.

This route is unpaved between Deep Creek and near Rock Camp Station (SBD 5.8 to SBD 12.7). However, postmiles exist along dirt portion and signage exists at Route 138, Route 18, and Route 189. According to a recent report in January 2004, the dirt portion has been reduced to only 4 miles, from SBD 7.5 to SBD 11.5 (where the Burnt Flats rubbish disposal is).

In March 2011, it was reported that Caltrans had closed the unpaved portion. In the past 10 years, at least one person has died "falling down the steep, unguarded mountainside," and to maintain the narrow road Caltrans has spent between $20,000 and $40,000 annually. The road was built in the late 1800s, the road has withstood storms and fires and served as an access route for hauling materials from the High Desert to build Lake Arrowhead and its dam. Lake Arrowhead Reservoir began construction in 1904 and wasn't completed until 1922. There will be two steel gates -- one at the top of the mountain near Willow Creek Jeep Trail and the other at the bottom of the mountain where the road ends just below Lake Arrowhead Road

In 1933, the route from "[LRN 60] in Santa Monica to the intersection of Ninth and Indiana Streets in Los Angeles via Tenth Street" was defined as part of the highway system. In 1935, this route was added to the highway code as LRN 173 with that definition. Tenth Street was later renamed Olympic Blvd; note that Indiana Street was also a state highway for a time.

Olympic Blvd was formerly Pennsylvania Ave. in Santa Monica, connecting with the extension of Louisiana Avenue and Tenth Street in Los Angeles, with an angling connection with Ninth Street east of San Pedro Street in Los Angeles, and thence following the old Ninth Street route to the east city limits of Los Angeles at Indiana Street. At this point, it joined LRN 166, generally known as the Anaheim-Telegraph Road. It is interesting to note that the route through the 20th Century Fox film studio land was donated by the studio. Olympic Boulevard was made a State highway route by the State Legislature in 1933. Since this time the State Division of Highways has been cooperating with the city, working to eliminate the jogs and poor alignment that tended to prevent the use of the route by the public.

In 1943, Chapter 964 changed the terminus: "… to the intersection of Ninth and Indiana Streets in Los Angeles via Tenth Street [LRN 166] near Downey Road". This terminus was former Route 245.

This route ran from Route 1 in Santa Monica to US 101 near Soto Street. This was pre-1963 Route 26, and is the present-day "Santa Monica" Freeway, I-10. It originally extended to the E as far as Route 15 (present-day I-710). It ran along Olympic Blvd to Soto, and then up Soto to LRN 2 (US 101). It also corresponded to the later I-10 routing to I-5. One map shows it continuing along Olympic. At one point, it ran along Pico between Lincoln and Beverly Drive.