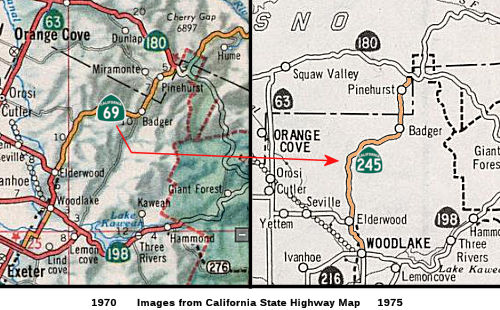 As defined in 1963, this route ran from "Route 198 to Route 180 near the General Grant Grove section of Kings Canyon National Park."

In 1972, Chapter 1216 repealed the definition of the route and renumbered it as Route 245. Rumor has it that the renumbering was due to continual theft of the Route 69 signs.

The route that would become LRN 69 was first defined in 1925, by Chapter 82, which stated “All that portion of the public highway commencing at Irwin Street, within the corporate limits of the city of San Rafael, in Marin county, California, and leading therefrom to Point San Quentin, in Marin county, California, and known as the San Rafael-San Quentin road is hereby declared to be a state highway...”

In 1933, the route was extended from San Jose to Richmond (East Shore Highway). In 1935, it was defined in the highway code as:

This route includes two of the San Francisco-Oakland Bay Bridge approaches (on the Alameda County end) described in Section 1 of Chapter 9, Statutes of 1933, one which starts approximately at the intersection of Cypress and Seventh Streets in Oakland, and one which starts at a point on the westerly side of Ninth Street in the vicinity of Ashby Avenue in Berkeley.

In 1937, Chapter 841 changed the Berkeley approach to be "the north and south portions of the one which starts at a point on the westerly side of Ninth Street in the vicinity of Ashby Avenue in Berkeley"

In 1947, Chapter 1233 removed the Bay Bridge approaches, and added the following third segment: "Route (b) above near Buchanan Street Extension in Albany to a point in Western Drive approximately 1,900 feet northwesterly of Scofield Avenue, Richmond." This segment later became part of I-580. 1947 also saw the creation of LRN 252 and LRN 226, and the rerouting of LRN 69 to the Nimitz Freeway routing.

In 1957, Chapter 36 deleted the new Richmond (c) segment, and clarified the second segment to be "San Jose to the Richmond-San Rafael Toll Plaza" (which removed the original (b) routing in Richmond)

In 1959, Chapter 1062 added a "a connection to LRN 5 near Warm Springs" to (b), and extended (a) to [LRN 56] near Point Reyes Station. It also swapped the segments. The resulting route was signed as follows: