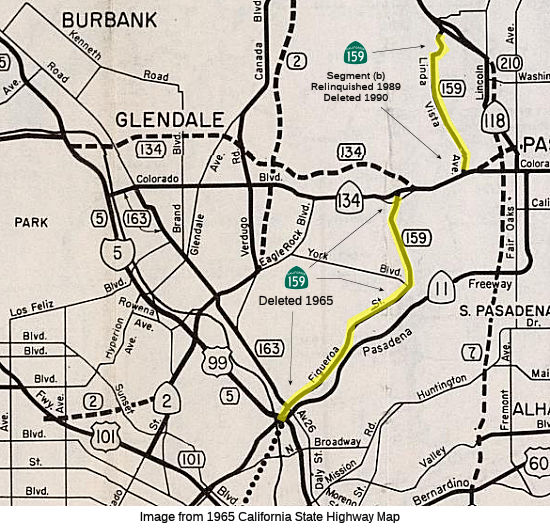 One 1939 map shows Route 159 as being signed along the route along Lankershim Blvd between Route 134 (Alameda Avenue before the freeway) and US 99 (San Fernando Road). This appears to coincide with Lankershim's designation as LRN 159. Signed Route 159 was not defined in the 1934 initial set of state signed routes.

Former part (1) of this route is signed as part of "Historic Highway Route 66", designated by Assembly Concurrent Resolution 6, Chapter 52, in 1991.

The former part (1) of this route (Figueroa) was part of the "Arrowhead Trail (Ocean to Ocean Trail)". It was named by Resolution Chapter 369 in 1925.

The former part (1) of this route (Figueroa) was part of the "National Old Trails Road".

The former part (1) of this route (Figueroa) appears to have been part of the "National Park to Park Highway", and the "Pikes Peak Ocean to Ocean Highway".

This route was Lankershim Blvd between US 101 and San Fernando Road. Some maps show it signed as Route 159, but that is clearly an error confusing the LRN with the signed rout number. The LRN was also applied to the present-day Route 170 freeway routing. Lankershim Boulevard was named for the town of Lankershim (first called Toluca, now North Hollywood) and its founding family. Isaac B. Lankershim grew wheat in a wide swath of the Valley.