The following pages provide information about some of the more prominent named trails and roads in California:

S. Varner's American Roads site has a page devoted to Auto Trails. Most important, it includes a list of North American Auto Trails.This site is devoted to the old roads--the marked trails that existed in the 1910s-1920s, before road numbering came into wide usage.

Volcanic Legacy Scenic Byway All American Road. This is a 500 mile journey from volcano to volcano. The southern end of the byway begins at California's Lake Almanor, just miles from the active geothermal features at Lassen Volcanic National Park. The northern end of the byway is capped by Crater Lake National Park in Oregon where mysteries of the earth's interior are studied.

Lincoln Highway: The Lincoln Highway was the first transcontinental road for automobiles in the United States, dedicated in 1913. It winds its way over 3,000 miles between New York City and San Francisco. In California, it ran along US 50 and portions of US 40.

Pikes Peak Ocean to Ocean Highway. This is one of the early transcontinental highways of the named trail era (about 1910-1926). The course of the highway was from New York through Philadelphia, Washington, Baltimore, Cumberland, Wheeling, Columbus, Dayton, Indianapolis, Springfield, Ill., Hannibal, Mo., St. Joseph, Belleville, Kans., Colorado Springs, Glenwood Springs, Salt Lake City, Reno, Sacramento and Oakland to San Francisco (and in a later version, to Los Angeles). Principle highways in California were US 40, US 50, US 99, and Route 89. Maps can be found here. 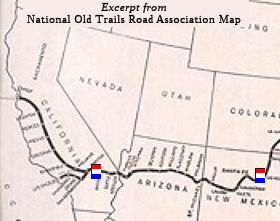 Trail Names and the "Southern Cause"

On the more infamous side, there was an attempt to create an auto trail in "honor" of Jefferson Davis, President of the Confederacy. The attempt failed, but good details on the history may be found on this page from Living Gold Press . Within California, monuments were placed along US 80 and US 99. All have since been relocated, and all ostensibly were not remembering Davis for his Confederacy role (this was common for such efforts as a nod to acceptability while still conveying a different message). In California, the monuments along this trail were as follows:
(Source: Living Gold Press, Los Angeles Times, 7/8/2020)


The Davis Highway was created in response to the Lincoln Highway by the United Daughters of the Confederacy (UDC). After the Lincoln Highway was announced in 1912, the UDC decided to create a Jefferson Davis Highway across Southern states to commemorate the "lost cause" (which often was a euphemism for a much more insidious cause). They cobbled together local roads and placed some monuments. On the monuments, however, they made the claim that Davis was the father of Transcontinental Highways because as secretary of War in 1853, Davis “surveyed for military use three routes across the United States. They claim these were for highways, bue the reality is that the surveys were for possible transcontinental railway paths — a Northern, a Central and two Southern Pacific surveys — plus a fifth survey up the West Coast. This latter survey was the justification for extending the route N from San Diego up US 99 to the Canadian border. But as usual, this was an after the fact, retro-justification for what they did.

Reflecting the trends of the 1910s and 1920s, there were other highways named to commemorate the "Southern Cause". These include the Robert E. Lee Highway, the Dixie Overland Highway, and the Bankhead Highway (for John Hollis Bankhead, an Alabama politician and Confederate war hero). The move to highway numbers in the late 1920s allowed these names to fade into obscurity.