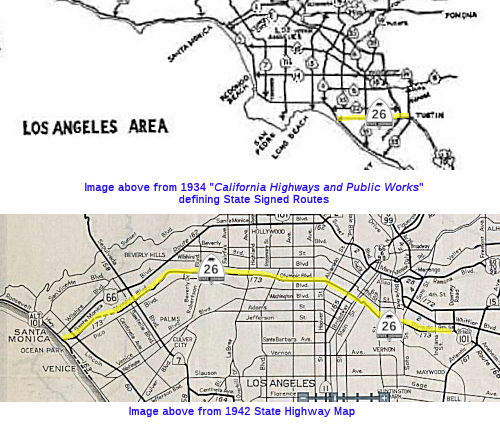 By the time the 1938 state highway map was printed, LRN 173 (defined in 1933), the route originally signed as Route 6 was resigned as Route 26. The original signed Route 6 ran from Santa Monica to Jct. Route 39 in Fullerton along roughly Olympic and Whittier. In Los Angeles, it ran between US101A (Lincoln Blvd) and US101 along 10th Street, later renamed Olympic Blvd (in 1939, the route ran along Pico between Lincoln and Robertson). Evidently, the original plan was to call this Route 6, but that went away when US 6 was assigned to a different route. It used the McClure Tunnel now used for I-10. Olympic Boulevard was built (widened and realigned) in two stages. By 1938, major improvements were completed. The jog at Figueroa Street was eliminated. Near Alvarado Street, Hoover Street and Arlington Avenue, Olympic Boulevard was realigned away from 10th Street to provide continuity. Westerly of Lucerne Boulevard, Country Club Drive was renamed Olympic Boulevard, widened throughout and extended through the 20th Century Fox movie studio property. Further improvements were disrupted by World War II. In 1948, the final links of Olympic Boulevard were constructed between Crenshaw Boulevard and Lucerne Boulevard and between Centinela Avenue and Lincoln Boulevard. The latter project was built as a landscaped divided parkway with no driveways through the City of Santa Monica. Before the construction of the freeway in downtown LA, the route continued along Olympic Blvd and 9th St. to Atlantic Blvd (Route 15; LRN 167). A 1942 map shows that Route 26 was cosigned with Bypass US 101 from approximately the Olympic/Telegraph junction to Route 19. A 1948 map shows the route running along Olympic, 9th St, Anaheim, Telegraph, Los Nietos, Whittier Road, La Mirada Road, and La Habra Road, terminating at the intersection of Manchester Blvd (then Bypass US 101) and La Habra Road in Buena Park. It was later replaced by I-10, the Santa Monica Freeway, but early plans show this as the Olympic Freeway. The signage for Route 26 may have been down by 1959.
(Some historical information on 10th St/Olympic Blvd was derived from "Transportation Topics and Tales: Milestones in Transportation History in Southern California" by John E. Fisher, P.E. PTOE, available at http://ladot.lacity.org/pdf/PDF100.pdf) 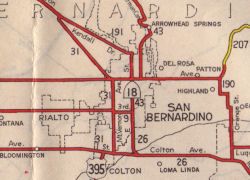 The route that was to become LRN 26 was first defined in the 1916 Second Bond Issue, together with LRN 27. The wording was "an extension of the San Bernardino county state highway lateral to the Arizona State Line near the town of Yuma, Arizona, via the cities of Brawley and El Centro in Imperial County by the most direct and practical route...". Given that the "San Bernardino county state highway lateral" was LRN 9 (from LRN 4 (US 99) in San Fernando to San Bernardino, this means that LRN 26 initially started near former US 66 in San Bernardino. The 1944 map to the right shows the spur of LRN 26 into San Bernardino along E Street. From there, the route continued to Colton, then to Indio, down along the south shore of the Salton Sea to Heber and Brawley, where it met LRN 27 in El Centro. LRN 27 (US 80, later I-8) then continued easterly from El Centro to Yuma Arizona.

It was extended again on both ends in 1931. On the northwestern end, there was a significant extension west of Colton, adding a segment that ran from [LRN 26] near Colton via Pomona to Los Angeles. Specifically, segment (i) of Chapter 82 defined it as "[LRN 26] near Colton via Pomona to Los Angeles". The April 1931 also discussed the proposal for the route, which referred to it as "a highway from Los Angeles to a connection with [LRN 26] E of Colton". The confusing part here is that the extension did not start in Los Angeles; rather, it started from the eastern border of Los Angeles (roughly the LA River, just E of Eastern Avenue), near Ramona and Garvey. The routing utilized Garvey (much of which was later subsumed by I-10) and Holt Avenue. The rationale for the extension was to provide a mid-point route between LRN 9 (US 66) to the north, and the eventual US 60 routing to the south.

The 1931 act also extended the route on the southeastern end, extending it from El Centro and the junction with LRN 27 (US 80) to the border at Calexico. The extension's norther end was near the junction of LRN 12 (US 80 - El Centro to San Diego), LRN 27 (El Centro to Yuma), and LRN 26 (El Centro to Los Angeles) in the center of the intensely cultivated irrigation district of the Imperial Valley. The southern terminus was the only important entrance to California from Mexico E of the Pacific Coast.

In 1933, the route was extended from "Los Angeles (Aliso Street) to [LRN 26] near Monterey Park via Ramona Blvd", which completed LRN 26 into downtown Los Angeles. This was the eventual Ramona Expressway that became the San Bernardino Freeway (I-10).

It was primary state highway from San Bernardino to El Centro.

In 1961, Chapter 1146 relaxed the description of segment (a) to eliminate a specific routing (and thus permitting the Interstate routing): "Los Angeles (Aliso Street) to Calexico via Ramona Boulevard, Monterey Park, Pomona, Colton, Brawley, and El Centro."

Signage along this route was as follows: