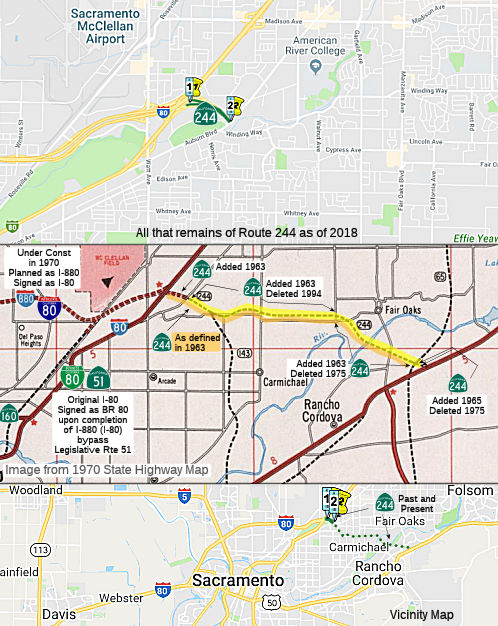 From Route 80 to Auburn Boulevard in Carmichael.

Why? According to Concrete Bob on AARoads: In November 1974, the Sacramento County Board of Supervisors voted 3-2 to reject the funding and construction of Route 65, Route 143 and Route 244. Construction on Route 143 and Route 244 was slated to begin in 1975. When Adriana Gianturco took over Caltrans in 1975, she worked with Caltrans and the Legislature to change the routes/abandon them. Sacramento County was very cooperative with Caltrans on selling off the rights of way for Route 65, Route 143 and Route 244, since they rescinded the plans for the freeways in November 1974. One of the County Supervisors who voted down the freeways had a developer brother-in-law who acquired much of the Route 143 right of way from Caltrans between Arden Way and American River Drive for a housing development. Twenty years after the plans for the freeways were yanked, the Sacramento Bee interviewed the County Supervisors who voted down the freeways. Two of the three supervisors who voted down the freeways regretted their decision.
(Source: Concrete Bob on AARoads, 7/22/2019)

“The department and State Transportation Board shall cooperate with the County of Sacramento and the Sacramento Regional Area Planning Commission in the transportation corridor study conducted by the county and the commission on the adopted route for Route 244. Such cooperation by the state shall be limited to furnishing existing data.

In 1990, Chapter 1187 clarified the definition: “Route 80 to Fair Oaks Boulevard near San Juan Avenue in Carmichael.”

In 1994, Chapter 1220 deleted the portion from Auburn Boulevard to Fair Oaks Boulevard, giving: “Route 80 to Fair Oaks Boulevard near San Juan Avenue Auburn Boulevard in Carmichael.” This left the terminus as Auburn Blvd (the route is constructed as freeway for 0.6 mi from I-80 to Auburn Blvd). This left the meaning of Route 143 unclear, as it originally split off of Route 244 about 3/4 mi NE of the present Route 244 terminus. However, Caltrans maps show that the segment from Auburn Blvd to Route 143 is now part of Route 143.

Note that Route 244 could have formed the eastern half of a loop around Sacramento with present-day I-80 (former I-880).

In August 2008, Caltrans listed for sale three acres of commercial property in the Foothill Farms area with prime freeway access, a location seen by thousands of motorists a day and a history that includes one of Sacramento County's most contentious times. The 3.27 acres were a portion of Route 244, which was supposed to connect I-80 and US 50 and which would have cut a swath through the heart of Carmichael. It was one of three freeways long planned to relieve congestion in the county's northern and eastern suburbs. After the state spent $10.6 million to acquire right of way for the routes, a series of volatile public hearings began in early 1972. The forums ended after fierce debate in mid-1976, when a split county Board of Supervisors abandoned plans for the 45.4 miles of freeways. The property is adjacent to what is today the Auburn Boulevard access to the Capital City Freeway and I-80. The section that's for sale is 1,100 feet long by 350 feet wide. It is a vacant lot generally level at street grade. Since it is next to four freeway access points, the only entrance allowed is along a 65-foot strip facing Auburn Boulevard. Minimum bid is nearly $1.18 million.

In August 2011, the CTC approved $7,000,000 in SHOPP funding for repairs near Sacramento, from Madison Avenue Overcrossing to Placer County Line; also on Route 244 from Route 80 to Auburn Boulevard, that will rehabilitate 61.2 lane miles of roadway to improve the ride quality, prevent further deterioration of the traveling surface, minimize costly roadway repairs and extend the pavement service life.

This is usually referred to as the "Auburn Boulevard Connector". Note that, according to Calnexus, it would be signed as Route 244.

[SHC 253.8] From Route 80 to Auburn Boulevard. Added to the Freeway and Expressway system in 1959. In 1975, the freeway portion from Auburn to Fair Oaks was deleted. 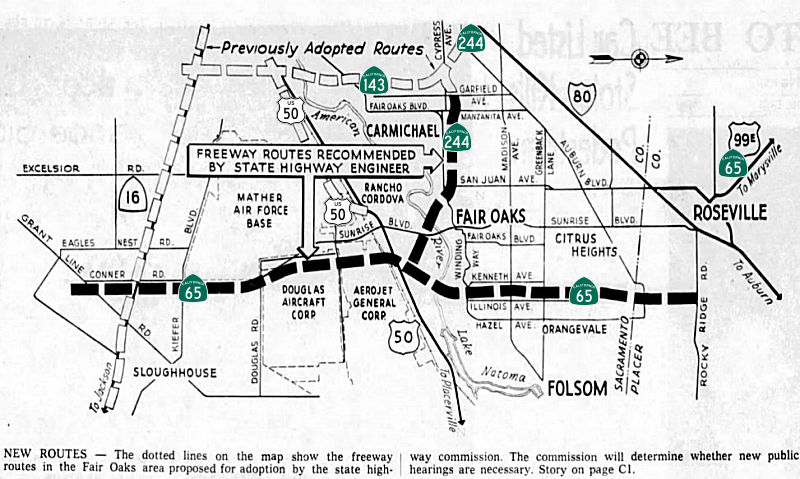 In December 1963, a proposed route adoption was published for a portion of this segment, between Route 16 and I-80. The Sacramento Bee wrote:
(Source: Joel Windmiller, California's Historic Highways on FB, 6/2/2020)

The state highway commission today announced its intention to adopt routes for proposed freeways in the Fair Oaks area. State Highway Engineer J C Womack was instructed by the commission to determine whether local authorities wish further public hearings on the routes. Previous public meetings developed great controversy among local residents regarding several routes being studied by the highway engineers. The routes that the highway commission has taken under consideration in some cases meet majority local approval and in others have opposition. The routes recommended by Womack for commission: North-south State Highway [Route 65 (LRN 249)] and new Route 244 known as the A alternate offered at the public hearings. This is a line that begins one half mile south of Grant Line Road, and runs north near the westerly boundaries of the Douglas Aircraft and Aerojet-General Corporation properties. It then crosses the American River about a mile upstream from Sunrise Boulevard and runs between Kenneth and Illinois Avenues and continues north to a junction with Rocky Ridge Road east of Roseville in Placer County. This is the direct line route which has received approval of most local agencies except the Fair Oaks Improvement Club. The club suggested routes further to the east. The highway engineers studied these but found them to be less acceptable from the stand-points of traffic service cost area.  Combined Route The route is: East-west State Highway LRN 288 (new Route 244) — a line combining parts of what was termed alternates 1 and 4 at previous public hearings beginning at Garfield Avenue near Cypress Avenue in Carmichael that will connect with a freeway routing between Lincoln and Fair Oaks Boulevar to property East of San Juan Ave, then to the American River a little west of Sunrise Boulevard and connecting with the recommended freeway through Fair Oaks. Engineer Womack said there is no intention to construct the freeways at the present time. He estimated it and new roads and bridges across the American River could be eight years away.