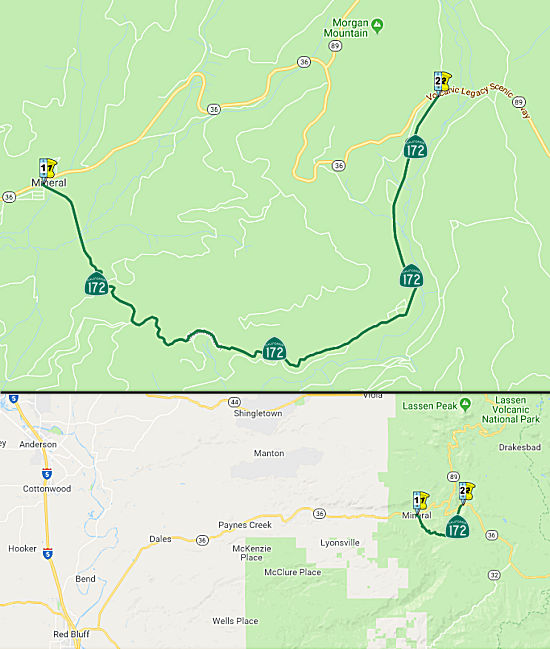 From Route 36 at Mineral to Route 36 near Morgan Summit.

The 12-mile loop of Route 172 was the original LRN 29, the primary route east of Red Bluff to Susanville and then on to Reno, NV, and, before about 1934, was signed as Route 36. That section, between Mineral and Morgan Summit, was routed through a narrow valley -- one that just happened to feature numerous lodges and spas built to take advantages of the numerous hot springs in that volcanic area. It zig-zagged back and forth across the valley, serving the various facilities -- but because of the constricted space in the valley, the roadway was never more than 18 feet wide -- and was never striped for 2 lanes. In 1934 the route was bypassed by LRN 86, which was laid out in a large S-curve from Mineral (the present west junction of Route 36 & Route 172) to LRN 83 (Route 89) south of the southern entrance to Lassen Park; while not much of a saving in total mileage, it was a more modern 2-lane facility that not only allowed faster speeds but also cut about 13 miles off the distance between Red Bluff and Lassen Park. Route 36 was rerouted over LRN 86 when it was completed, leaving the LRN 29 loop unsigned until the '64 renumbering, when it was signed as Route 172. As of 30 years ago, Route 172 was still one lane -- actually narrowing to about 13-14 feet in some sections. Route 172 is a unique (any one-lane state highway fits that description) short route, but one that certainly was of little use as a through facility. Decommissioning of Route 172 has been under discussion for several years now, but the plug hasn't been pulled as of yet (probably due to objections by the several property owners along the highway who want to make sure it gets plowed in winter; it's at about 5700-6000 foot altitude).
(Source: AARoads, "CA 172; one-lane madness and SSR 36 puzzle", 6/25/2017)

A discussion on AARoads noted that a 1935 topo shows Route 36 on current Route 172. It isn't clear what is on the alignment of CA 172 on the 1938 state highway map nor on the 1935 Tehama County Map, but the modern alignment of Route 36 for sure was already present. Route 172 is there by 1963. From the official '63 state highway map, what is now Route 172 was always part of LRN 29 (Red Bluff - Nevada along US 395) until the demise of the LRN/SSR dichotomy in '64. LRN 86, from LRN 83/Route 89 up the hill on the way to Lassen NP down to the west Route 36/Route 172 junction, was physically added to the state highway system circa 1938, although planning for that bypass (and the allocation of the LRN 86 designation), specifically to realign Route 36, preceded construction by several years. Apparently the Division of Highways wanted to get the one-lane segment, now part of CA 172 -- and the various facilities along it -- bypassed as much as its regular users did; that "loop" went unsigned from 1938 to at least 1964.
(Source: AARoads, "CA 172; one-lane madness and SSR 36 puzzle", 6/25/2017)

Route 36 can be seen for detail for the first time on the 1935 Gousha Highway Map of California.  Note; Route 36 is shown traversing LRN 29 by way of what is presently Route 172 over Mineral Summit.  It is unclear when Route 36 moved off of LRN 29 over Mineral Summit.  One of the few maps I can find showing in fully clear detail Route 36 over LRN 29 via Mineral Summit is the 1935 USGS Map of Payne's Creek.  USGS Maps from the 1950s show Route 36 realigned via LRN 86 and LRN 83 over Morgan Summit. A May 1935 Division of Highways Map shows the progress of signing the US Routes and Sign State Routes in California.  Route 36 is shown to have been fully signed over Mineral Summit via LRN 29.  There seems to be some evidence that Route 36 may have been realigned over Morgan Summit by 1940.  The 1940 Division of Highways State Map shows LRN 86/LRN 83 paved over Morgan Summit whereas Mineral Summit on LRN 29 is still shown to be a Oiled Earth or Gravel surface.
(Source: Gribblenation Blog, "California State Route 172", October 2020)

In April 2005, the CTC considered a resolution to vacate right of way in the County of Tehama, between Engineers Stations 299+00 and 341+00, consisting of highway right of way easement no longer needed for State highway purposes.

In 1933, the route from "Los Angeles, Boyle Avenue, and 4th Street to [LRN 19] near Walnut Station" was added to the state highway system. In 1935, this route was added to the highway code as LRN 172 with the routing:

"Los Angeles, at the intersection of Boyle Avenue and Fourth Street to [LRN 19] near Walnut Station"

This was the route from US 101 in Los Angeles to US 60 near Walnut. This was part of the freeway routing of present-day Route 60. Pre-freeway, it run from US 101 and 4th Street, E to 3rd Street, and along Pomona Blvd. Shortly after the Pomono Blvd/Potrero Grande split, it went onto the proposed freeway routing. At one time, it was suggested that it continue E on a new alignment from LRN 19 to the SBD County Line, but this was never accepted.

It was also proposed that the freeway be extended to meet up with the Beverly Hills Freeway (i.e., from the Harbor Freeway to the Hollywood Freeway). This was never accepted.