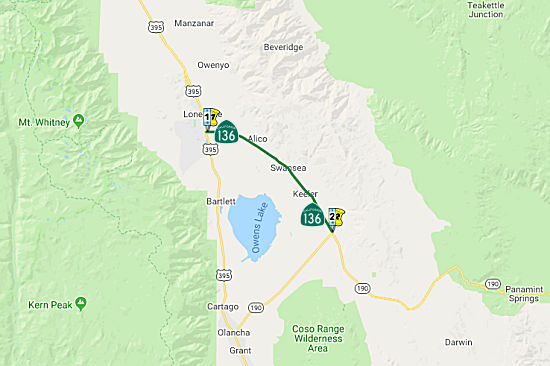 This routing remains as defined in 1963.

This was LRN 127, defined in 1933. It was signed as Route 190 before 1964. The Route 136 number wasn't applied to the portion of the route around the north end of Owens Lake until the 1964 renumbering, when the Olancha "cutoff" was brought into the state system as Route 190. Note: There is some more history on the routing with the discussion of LRN 127.

Tom Fearer explored the history of this route in a discussion chain in AARoads in July 2017: Route 136 largely came to be due to the location at the site of what was once a 100 square mile and very much wet Owens Lake. Owens Lake is fed by the Owens River and was thought to be as large as 200 square miles about 11,000 to 12,000 years ago. The water level of Owens Lake was typically anywhere from 25 to 50 feet in depth and was last full before the Los Angeles Aqueduct project started to divert water in 1913. The lone inhabited location on Route 136 is a CDP known as Keller that essentially is a ghost town. Keeler was founded originally as "Hawley" in 1872 when the pier for the Cerro Gordo Mines at Swansea a couple miles north was lifted out of Owens Lake by the Lone Pine Earthquake. At some point, the town name was changed to Keeler.The Carson and Colorado Narrow Gauge Railroad reached it by 1883. Keeler remained the southern terminus of the Carson and Colorado until it was shuttered in 1960. Apparently the tracks were removed later but the former rail depot has remained standing in Keeler as a derelict ever since. There is a really nice Carson and Colorado museum at the Laws Depot north of Bishop just off of US 6. Route 136 is pretty sound and pretty much the quick shot out of Lone Pine for anyone heading to Death Valley National Park. It is very smooth, very straight, and very fast with a 65 MPH speed limit the entirety of the 18 miles of the route. Route 136 was applied over the previous unsigned LRN 127 when the state highways were renumbered in 1964. The route of LRN 127 appears to have cut south along the Owens River and followed closer to the shoreline of Owens Lake to Keeler. The modern bypass and most of Route 136 north of Keeler appears to be on the former right-of-way of the Carson and Colorado Line east of the Owens River. LRN 127 adopted the modern routing of Route 136 in 1955.
(Source: Tom Fearer (Max Rockatansky) on AARoads, "CA 136; the tale of Owens Lake and the Carson/Colorado Railroad", 7/7/2017)

Some notes on the origin of the name "Keeler". When the Carson and Colorado RR (C&C) arrived at what became Keeler it named its station Hawley (after someone connected with the mines).  There was then a movement to get RPO service on the railroad and so a post office had to set up near the depot.  The name "Hawley" was not an available name for a California post office because there already was one near Dagget  (near Barstow).  So the application was made again with the name "Keeler" for the superintendent of the nearby ore mill.  The newspaper in Independence said this name should have been proposed at first.
(Source: Brian Nordon, 5/28/2021 Email)

In 1933, Chapter 767 added the route from "[LRN 4] near Delano to Bakersfield-General Grant Park Road" to the highway system. In 1935, this was added to the highway code as LRN 136, with the definition:

This definition remained unchanged until the 1963 renumbering. It ran from Route 99 to Route 65, and appears to be the portion of Route 155 between Route 99 and the Famoso-Porterville Road. The remainder was part of Route 65 along Richgrove (although this might have also been part of LRN 129), and later was County Sign Route J35. This was Route 211 between 1963 and 1965.