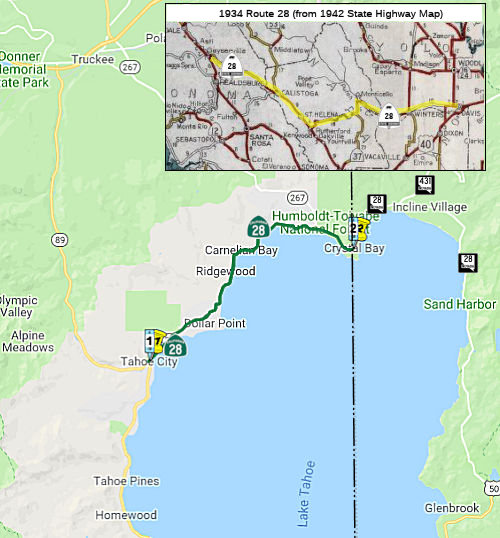 From Route 89 at Tahoe City along the northern boundary of Lake Tahoe to the Nevada state line at Crystal Bay.

The current definition of Route 28 is unchanged from the 1963 definition.

The present-day routing of Route 28 is not the original routing. In 1934, Route 28 was signed along the route from Jct. Route 1 near Albion to Jct. US 40 near Davis, vis Sage Canyon. This corresponded to the following routes:

The present routing was LRN 39 (defined in 1915), and has been signed as Route 28 since 1952. Prior to 1952, the route was unsigned. The Route 28 designation permitted the route along the north shore of Lake Tahoe between Tahoe City and the California-Nevada boundary to join Nevada Sign Route 28 at the state line.

This route continues into Nevada as Nevada 28.

In December 2020, the CTC authorized relinquishment of 03-Pla-28-PM 9.2/10.3, right of way consisting of nonmotorized transportation facilities, in the county of Placer along Route 28 (North Lake Boulevard) between Route 267 (North Shore Boulevard) and Chipmunk Street. The County agreed to waive the 90-day notice requirement and accept title upon relinquishment by the State under the terms and conditions stated in the relinquishment agreement dated August 31, 2020.
(Source: December 2020 CTC Agenda, Agenda Item 2.3c) 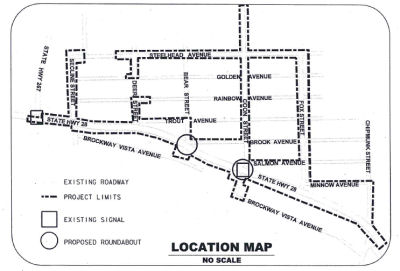 In 2007, the CTC did not recommend using the Corridor Mobility Improvement Account to fund the Kings Beach commercial core.

In June 2012, the CTC approved for future consideration of funding the Kings Beach Commercial Core Improvement Project (project) in Placer County, which will include roadway improvements to Route 28 to accommodate anticipated future transit and pedestrian needs which will include installing sidewalks; constructing curbs, gutters, storm drains, and water quality facilities at specific locations; streetscaping; designating specific road sites as on-street parking; and construction of new, off-street parking lots at specific locations within the action area in Placer County.

The route that would become LRN 28 was first defined in the 1909 First Bond Act as running from Redding to Alturas. It was also part of the "Lassen State Highway" established in 1911 by Chapter 498 as follows:

"That certain highway known as the county road and beginning on the boundary line between Shasta and Lassen Counties in the NE corner of T37N R6E and running and extending through T38N R6E, T38N R7E, T38N R8E, to the Modoc County Line...shall be designated and known as the Lassen State Highway"

It was seemingly extended in 1915 when Chapter 765 authorized the survey, location, and construction of a route "from Surprise valley, in Modoc county, to the Nevada state line." However, this authorization was rescinded in the 1935 act that created the state highway code.

In 1921, it was more directly extended with Chapter 888, which provided an appropriation “...for the survey, plans and estimates and for the construction of the highway from the town of Alturas in Modoc county to the Nevada-California state line by the most direct and practical route via Cedarville in connecting with the proposed Nevada state highway...”

By 1935, the route had been codified into the highway code as running "from Redding to the Nevada line via Alturas and Cedarville". It was primary state highway from Redding to Alturus. The 1935 definition remained unchanged until the great renumbering in 1963. The entire route was signed as US 299 between Redding and US 395. The signate E of US 395 to the Nevada border before 1964 was unclear.