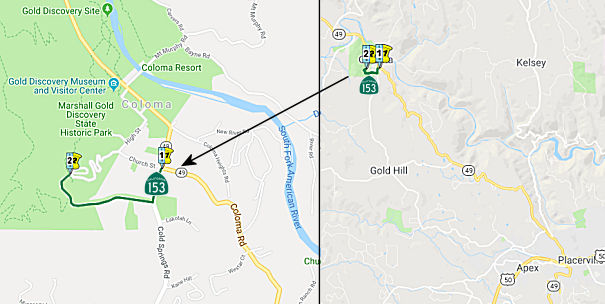 From Route 49 near Coloma to Marshall's Monument.

This route is unchanged from its 1963 definition.

This route was LRN 92, defined in 1933. It was not signed. This route exists in the State Historic Park.

Note: This is one of five routes in California with "backward postmiles" -- that is, PM ED 0.000 is at the Eastern end of the route, and increase as the route goes West. The historical reason for this is unclear, unlike with other "backward postmile" highways that often transitioned from S/N to W/E (such as I-580).

This route has only one sign, at its start. Below the sign is another sign noting this is California's Shortest State Highway (although it really isn't; another highway, Route 283, has that honor).

In 1933, Chapter 767 defined the route from "Hueneme to Montalvo-San Fernando Road near Somis via Oxnard and Camarillo" to be a state highway. In 1935, this route was added to the highway code as LRN 153, with the following definition:

"Hueneme to [LRN 9] near Somis via Oxnard and Camarillo"

In 1959, Chapter 1062 changed the definition to delete the specific routing: "…near Somis via Oxnard and Camarillo".

This route is present-day Route 34.